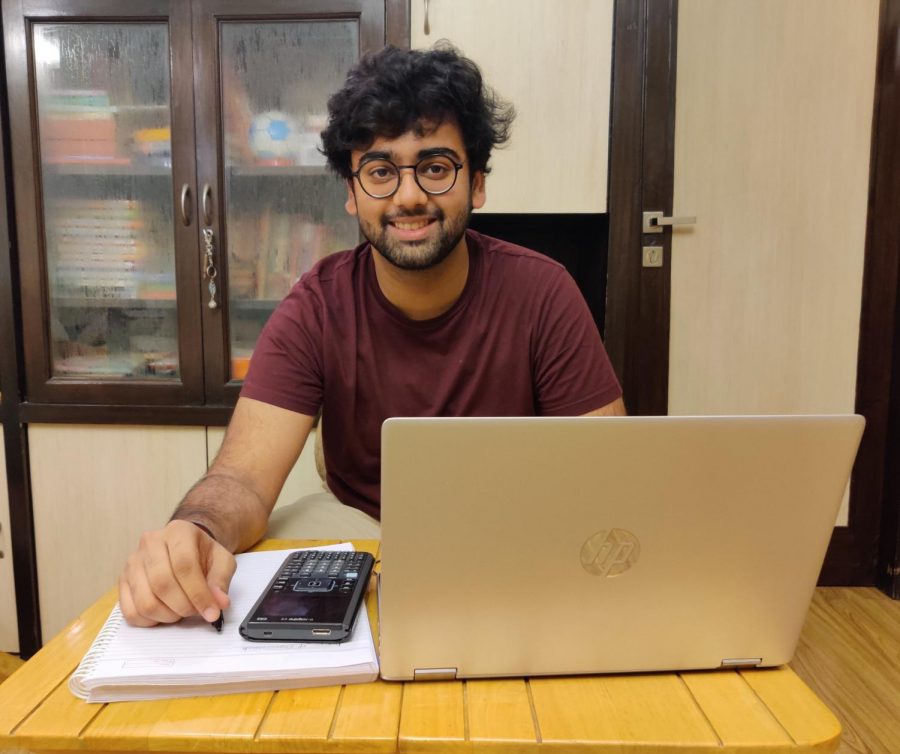 Junior Vishrut Khaitan sits at a desk with the materials he needs to do school work.

Vishrut Khaitan, a junior in Engineering, traveled 7,858 miles to get home when the University decided to transition online. Balancing finals, family life and a ten-and-a-half hour time difference, Khaitan talks about his experiences back home in New Delhi, India.

Vishrut Khaitan: “It was a couple days before spring break when everyone’s plans were canceled, so we were upset about that. I wasn’t planning to go back home, but my parents were more comfortable with me being here rather than being back in Champaign. It was hard to just leave everything and come back. I had a lot to look forward to this semester that I was now going to miss. When I left, I thought that the situation would be resolved within a couple of weeks and things would get better. I left with the mindset of coming back. But obviously, as we both know, that’s not going to happen at least for this semester. I don’t know about the fall.

“Coming back here, it was hard to get used to online classes, especially because of the time difference. Luckily for me, two of my classes are live while the others are at-your-own pace. But even right now, it’s 2:30 in the morning. I don’t usually stay up this late, but I’ve changed my sleep schedule to adjust that way. I’m awake from 6 p.m. to 9 a.m., working and completing my assignments all night. That’s the case with most of my friends all over the world who are studying in the U.S.

“Neither of my parents went abroad to study, so I don’t think they can understand how I’ve changed my schedule to work this way. I do have a lot of work right now, and sometimes I think they feel like I’m choosing not to spend time with them, but that’s not the case. I’m an only child. Obviously, if you’re stuck at home with someone for two months,  you’re bound to get a little annoyed, but it’s better than I expected it to be.

“As for the situation in India right now, the country has been on lockdown since mid-March. They’ve broken the country up into zones: green, orange and red. I am in Delhi right now, and that is a complete red zone so nothing is open. It’s getting frustrating because you’re just working so much and you’re just cooped up at home. You can’t meet your friends. Now I’m just looking forward to the semester getting over.

“Back in Champaign, usually I prefer studying in the libraries, like Grainger or UGL. I’d usually study over there even if it was late at night. I used to study with others, and that was very helpful. It didn’t put as much pressure on me knowing that I was with them. Being back home, I wouldn’t say things have changed so much that I can’t focus on my work, but it’s obviously hard. Given the timings that I’m following right now, especially with finals coming up, I feel like it would be better if I was in Champaign.

“For me, face-to-face instruction and being able to work with others and clarify doubts just works better. I have five finals this semester. Two of my finals have been moved up; one is on the 5th and the other on the 8th now. I don’t know if it was always meant to be that way or if they just made the change because of online classes. That’s not the best thing to come out of this, I was hoping for a little more time; I would have had five more days to study.

“One of my finals, in local time, starts at 3:30 in the morning. The other one starts around 12 a.m. and is due by 3 a.m. That’s one of the reasons I tried to change my sleep pattern because I knew it would be like this. It’s better that I’m wide awake at this time rather than be asleep.”

The Daily Illini: How do you study?

Khaitan: “My study habits aren’t that healthy. I prefer pulling all-nighters. Especially if I have an early morning exam, I won’t sleep all night. Some of us will form a study group and stay up all night to study then go take the exam. Sometimes I prefer studying with people, but sometimes I prefer studying alone; there’s nothing fixed in that. Right now, we still have Zoom and Skype and can study together if we want to. It’s obviously not the same, but I actually use it quite a bit. It’s something, at least.”

The DI: Any advice for other international students?

Khaitan: “You should stick with whatever makes you feel comfortable. It’s not like you have to follow a schedule that someone else might be. These are hard times, so even if you don’t do as well as you wanted to or are missing something, it’s fine. No one’s going to look down upon you for that. Everyone should definitely reach out to their professors if they need help because they will be flexible and understanding right now given the situation.”