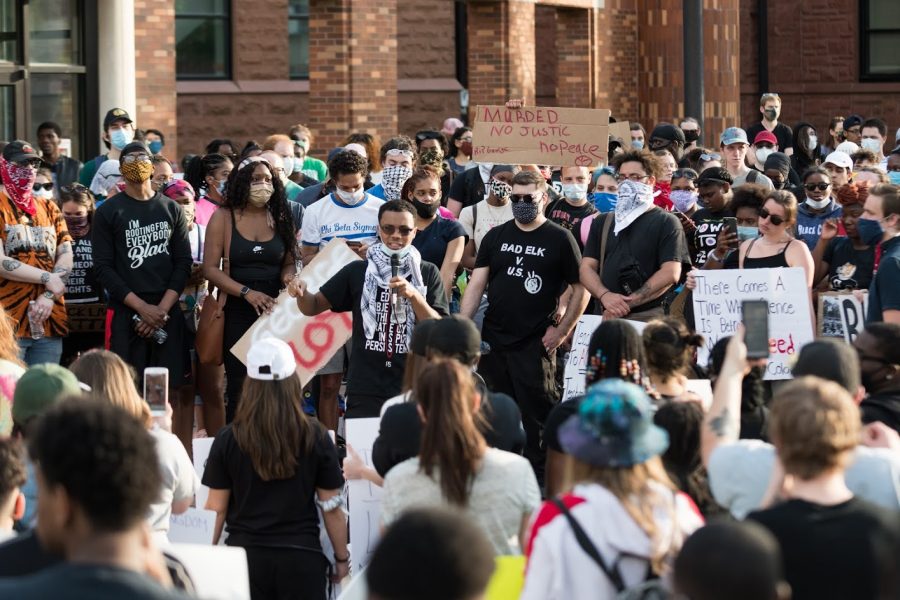 Organizer Drake Materre, a graduating senior in the college of AHS, offers closing words at the Champaign County Courthouse during the Black Lives Matter protest on June 1.

On May 25, George Floyd, a 46-year-old African American man, was killed in Minneapolis. After the video of the police brutality that resulted in Floyd’s death went viral, protests were sparked all over the country prompting thousands of people of all races to unite. The protests eventually reached a global scale, bringing hundreds of thousands of people to the street across the globe.

Champaign and Urbana were not strangers to the protests leading to the creation of several organizations that facilitated and supported numerous demonstrations. One of these organizations, Champaign County Bail Coalition (CCBC) grew out of the knowledge that some Champaign community members were charged with minor crimes during the protests. The arrested protesters were unable to pay their low bail amounts, which meant they would have to stay in jail until they received a trial.

“When someone is accused of a crime, they appear before a judge who comes up with an amount of money to pay to get out of jail.” Nick Hopkins, a member of CCBC who volunteered to talk to all media requests explained.

“When someone cannot afford bail, they have to sit in jail until their case is resolved. At that point, this person has not been convicted of anything and is essentially being punished for not having the money to bail themselves out,” he said.

Hopkins said that this kind of inequality has a deleterious effect on our community and unfortunately tracks historic racial inequalities which was a prime reasons for the formation of the group.

According to Hopkins, a group called Build Programs Not Jails first identified this local criminal justice issue. BPNJ then went into a hibernation phase after the construction of a new county jail was successfully thwarted. Former BPNJ members eventually honed on the anti-jail campaign to launch a new group to assist people unable to afford bail.

Hopkins said “Many CCBC members have participated in local protests around issues of anti-racism, criminal justice reform, and abolition. CCBC itself has organized small protests at the county jail and courthouse, highlighting the high risk of contracting COVID-19 that incarcerated community members face and the high bail amounts recently imposed on people arrested on May 31 in Champaign, respectively.”

While the CCBC continues to push to drop all charges against all Black Lives Matter protesters, they have already posted bail for 16 people collecting a donation that totaled over $47,000.

Hopkins said while CCBC started community fundraising a bit over a year ago, before COVID-19, they received average individual donations of less than $200 per month and $500-$5000 donations from local social justice organizations. Since the outbreak, there has been an increase in support and donations.

“There has been an incredible outpouring of interest and donations from the local community due to the high risk of contracting COVID-19 that comes from being in a jail setting,” Hopkins said. “In two weeks we received donations equalling about 30% of the total donations that we had raised in the whole of last year. We also received about $47,000 in donations from the Chicago Bail Fund to bail out individuals arrested in Champaign on May 31.”

Elizabeth Simpson, a member and founder of the Urbana chapter of Show Up for Racial Justice or SURJ was one of the organizations that were involved in the protest against the Urbana city council. Simpson said the protest primarily started because the city council was set to re-appoint the chief of police, despite member of the Urbana police department attacking a citizen on April 10, which has an ongoing investigation.

During the city council meeting, the police chief said the target of the attack, Aaliyah Lewis, was not injured, which was false. He also conveyed information including footage that was taken while she was incarcerated before she was bailed out that was taken without her consent, breaking policy.

Simpson said, “SURJ is trying to tackle a lot of problems; for example, the civilian police review board has submitted many complaints to the board regarding several issues including police brutality in Urbana, but they never reach the board because they get dismissed. They’ve received maybe 10 complaints even though we’ve probably sent hundreds.”

Simpson, who’s still working actively to support, organize and back several Black Lives Matter protests, said she thinks it’s important that people understand what the protests are trying to achieve. As the Black Lives Matter movement continues to grow and instigate change across the nation, the idea of defunding the police has quickly gained traction especially after Minneapolis announced its plan to disband the city’s police department and replace it with a different model of public safety.

Defunding the police does not mean getting rid of the police altogether. Rather, it means reducing police budgets and moving those funds to other critical and often overlooked areas like education, public health, housing and law enforcement training. The whole idea is centered around the belief that investing in people would act as a better deterrent to crime by attempting to fix problems like mental illness and poverty at the root.

She said, “When we say defund the police, we mean that the police are overfunded, and we should redirect these funds into proper training for our law enforcement and the betterment of our society.”