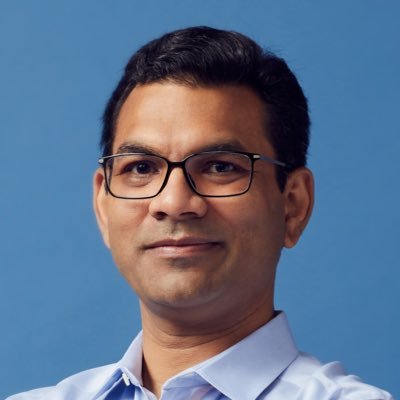 Senior Vice President of Paypal Sri Shivananda poses for a professional photo. Shivananda was a keynote speaker at the Reflections / Projections conference.

Reflections|Projections (R|P) is an annual technological conference at the University. This year, the conference was held from Sept. 21 to 26. The conference invited notable guest speakers known for their innovation and inspiration in their respective fields, and hosted various corporate events, a career fair and a 24 hour AI hackathon called Mechmania.

Sam Pal, senior in Engineering, currently serves as the co-director of Reflections | Projections 2020 and has been a part of the staff for the past three years.

She described her experience hosting the conference and said, “A student-run technology conference is no easy feat, and its incredible that we’ve been able to put it on for so long. The experience has always been amazing, nothing comes close to sleepless nights at Siebel, running around to make sure all events are going smoothly, and of course, the free food and swag.”

Rashi Dembi, junior in Engineering and a content committee staff member, said, “I was a freshman and was new to the university when I first attended R|P; there were several events that I enjoyed.”

Dembi said that she knew that she wanted to create an immersive experience for others, the way that previous staff had created for her.

Pal shared a similar experience, and said, “I actually found out about R|P pretty much serendipitously – I happened to walk into Siebel one day as a freshman during the R|P career fair and learned about all that R|P had to offer. I applied the same year to be on the staff and have been involved ever since! I was blown away by the proximity that the conference provides to these incredible leaders in our field, as well as the sheer amounts of companies and opportunities involved.”

While the conference usually consumed the Seibel Building (the heart of the computer science department), this year things were little different. Facing a pandemic, the students studying computer science were deemed best to organize and navigate through attendees, presenters and participants for an entire tech conference.

Dembi reflected on how losing out on in-person interactions, free food and swag were challenging to work around, but they managed well.

“Due to the conference being entirely online, we have been able to include speakers that we might not have been able to in the past. Before, our speakers would have to fly out here, stay here for the day of their talk and then fly back,” Dembi said. “Now, they can log into the Zoom webinar, give their talks and commit about 1.5 hours to their talks,” she continued.

This increased the variety of speakers they were able to host this year, additionally, allowing students to join the virtual conference from all over the world.

Pal agreed and added, “I still remember the staff meeting during which we decided to go entirely virtual – it seemed like we were giving up so much of the integral parts of R|P. But, our amazing staff took this opportunity to bring in the greatest number of speakers we’ve ever had, start our first ever attendee discord and have the best-quality talk recordings probably in the history of the conference (thanks to Zoom). We had to make the tough decision to get rid of our company and startup career fairs, but we compromised and still had some great offerings for our corporate sponsors.”

The conference consisted of speakers ranging from Sri Shivananda from Paypal, Mallory Knodel from the Center of Democracy and Technology, Saleema Amershi from Microsoft and to Wendy Pfeiffer, the CIO at Nutanix.

Dembi detailed the speaker’s involvement with the conference. She said, “During her talk, she taught the attendees about the implications to the world as a whole if artificial intelligence, which is created primarily by young Asian and Caucasian men, turns out to be like its creators. She also stressed the importance of creating more diverse and inclusive workplaces.”

While the conference is part of life for many students at the University, many students would have loved to learn about R|P. Dembi said that the one highlight that always rings true about R|P is that it’s not about the speakers, but rather the student attendees.

“Every time a speaker comes to campus, the one thing they all want to do is interact with students,” she said.

The Reflections|Projections 2020 conference successfully concluded, and applications to apply to be on staff for the next year come out late November. Anyone is welcome to share their ideas and thoughts for the future.

“R|P’s motto since I can remember,” Pal started, “has always been: where industry meets academia. And that’s pretty much exactly what we do. It’s been around for 26 years now, and has boasted speakers from all sorts of high places in the technology industry and academia.”

Editor’s Note: An earlier version of this story incorrectly reported a source to be in LAS instead of Engineering. The Daily Illini regrets this error.