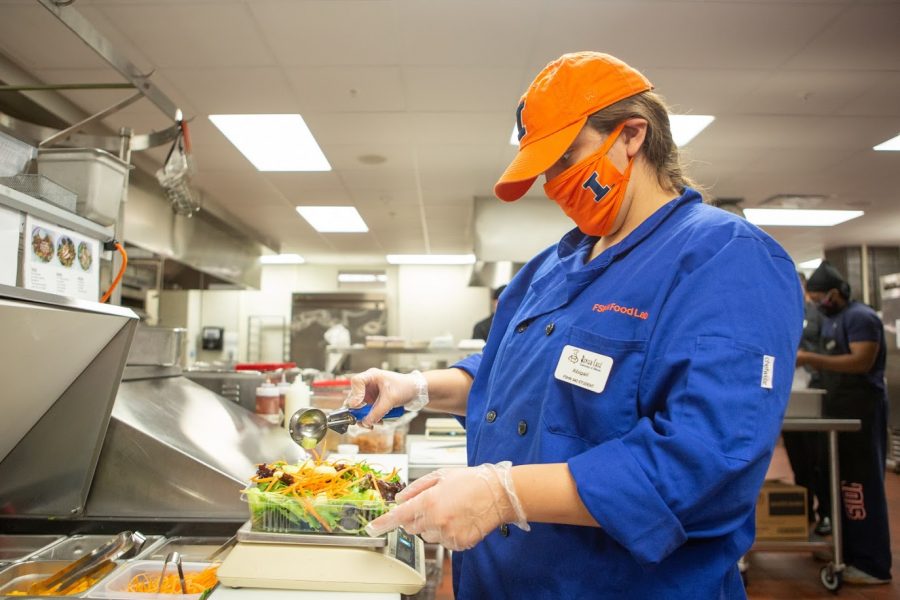 A FSHN 340: Food Production and Service student prepares a salad while working at the Bevier Cafe located in Bevier Hall on Friday. The Bevier Cafe has recently established its “Everybody Eats” initiative to fight food insecurity.

Bevier Cafe, an orange and blue cafe designed like a cross between a cafeteria and a home-town diner, used to serve upwards of 150 customers a day. The cafe, located on the second floor of Bevier Hall, staffed and managed by students in the Food Science and Human Nutrition (FSHN) department, was a staple for students and professors alike who spent their day in Bevier Hall. Then the pandemic hit.

For the first few weeks of the school year, it would be a lucky day if Bevier serviced 20 customers. With minimal classes meeting in-person and few professors working in the building, the cafe was left without its main customer base.

Instead of hunkering down and pushing through the school year with low service, Bevier Cafe decided to adapt. On Thursday, Sep. 24, the cafe began its “Everybody Eats” program, an initiative to combat food insecurity. The following week, the cafe serviced nearly 50 customers, with the Everybody Eats initiative being the driving force behind the influx of diners.

Jordan Brotherton, a clinical assistant professor of Hospitality Management, teaches FSHN 340, the class which runs Bevier Cafe. After reading about the effect of the pandemic on food insecurity, Brotherton developed a way to help the community as well as his students.

“I talked with some former students of mine who work at the ARC food pantry, and they explained to me the need for resources for food-insecure students on campus,” Brotherton said.

“I’ve learned over the past semesters, and especially during this pandemic, but that’s a real concern. We’ve only been doing it a week now. But the response from campus has been incredible,” he said.

The “Everybody Eats” initiative includes multiple different payment options. Customers can either pay face-value or utilize a pay-what-you-want model, in which customers can pay as much or as little as they want and receive the same meal as face-value. Customers can also purchase a token for $10, which can either be distributed to other community members or be placed in a container near the door. These tokens can be redeemed for a free meal.

Jacqueline Quintero, a senior in ACES, took FSHN 340 last year and is working at Bevier Cafe again this year as a learning assistant. Quintero helped students adjust to the kitchen workspace, especially during the first few weeks of the semester when students are still learning the ins and outs of the cafe. She said she believes that the “Everybody Eats” initiative is a great way to help college students struggling with food insecurity.

“When I first heard about, I thought this was such a great program because I’ve been there personally,” Quintero said.

“If you don’t have enough money, you can choose to pay whatever you can. Three dollars, five dollars, it can be anything you want. And there’s no judgment here. Because we all know that, you know as college students, we struggle with money sometimes,” he said.

Food insecurity, an already pressing issue, increased drastically during the COVID-19 pandemic. According to Feeding America, a non-profit organization dedicated to combating food insecurity, more than 54 million people may experience food insecurity in 2020 compared to roughly 35 million in 2019.

In addition to the “Everybody Eats” initiative, Bevier Cafe has also adapted to social distancing guidelines set by the state of Illinois. They’ve removed roughly half of their seating from the dining room and opened up additional seating down the hall in The Spice Box — a separate restaurant run by FSHN students geared towards a fine-dining atmosphere.

Throughout the semester, students in FSHN 340 work on rotation, each taking different positions in either the management or the kitchen staff of the cafe. FSHN 340 is a small class, typically running with between 15 and 20 students each semester, allowing for students to work in a tight-knit collaborative environment. Antonio Lewis, a super senior in ACES, enjoys the dynamic pace of working in the cafe.

Although the cafe hasn’t returned to the 150 customers per day they were used to pre-pandemic, the new “Everybody Eats” initiative has been mutually beneficial — helping the community by fighting against food insecurity