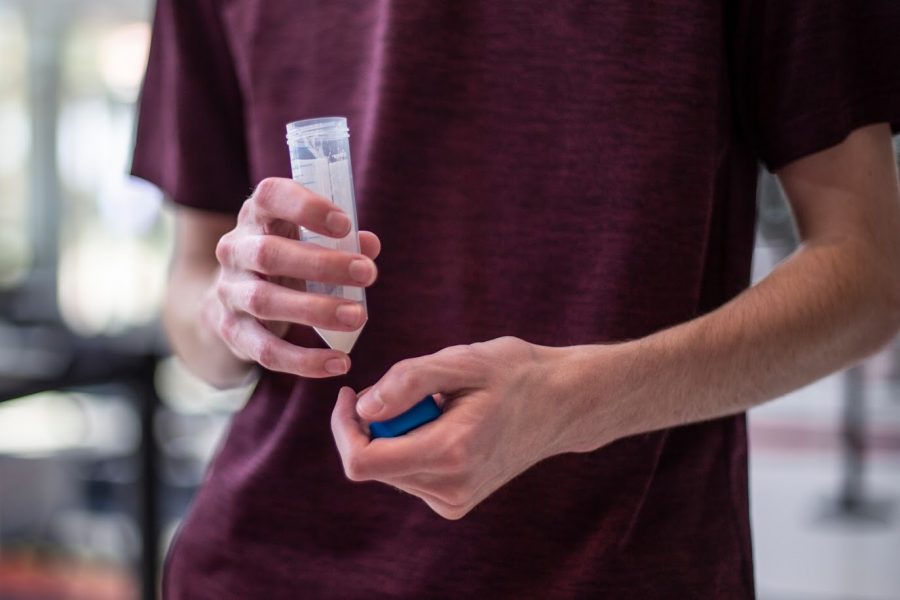 Student Zachary Chalmers takes a University COVID-19 test at State Farm Center on Oct. 8. Champaign County residents are told to take a COVID-19 test on day five or six of their quarantine.

Last week, the local health district began displaying the number of close contacts in Champaign County who’ve been ordered to quarantine, along with how many have been released and how many have tested positive while in quarantine.

According to C-U Public Health District epidemiologist Awais Vaid, the district has been tracking this data since July. However, there are several quirks with the data, and other details on the district’s robust COVID-19 dashboard, to keep in mind.

Since July, the state has been asking for quarantine numbers from the county. CUPHD is looking for a way to process and add the data from the first three months of the pandemic.

“The majority of our cases have been in the last three months, July through September,” Vaid said. “So the numbers will definitely go up a little bit, probably 20% more.”

To date, 853 people in the county have tested positive for COVID-19 after being quarantined. Once quarantined, Champaign County residents are told to test on day five or six, earlier if they start showing symptoms.

“On day five or six after exposure, people have a very high chance of becoming positive if they were truly exposed and have become infected,” Vaid said.

Once someone tests positive during his or her quarantine, the standard isolation period of 10 days will begin.

CUPHD doesn’t distinguish between campus and non-campus cases, since many University students and staff are connected to the community.

“A lot of these individuals, whether they’re grad students with their families or faculty and staff, they have been part of our community, and they live all across town,” Vaid said. “They’re not specifically living on campus, and that’s probably half the population of the campus community. And so we don’t distinguish between them as just campus, because they live here 12 months of the year.”

There are plenty of other quirks with CUPHD’s data. According to Vaid, campus cases are still 95% undergraduate, and early on, a significant portion were freshmen.

However, its contact tracers only have the birthdates of students who’ve tested positive, not their actual class designations, so it’s still technically unknown how many freshmen, sophomores, juniors and seniors have individually tested positive.

Also, CUPHD has a slightly fuller picture of how COVID has infected the campus population. According to Vaid, a “small portion” of students, faculty and staff who live on or near campus are testing, but they just aren’t using the on-campus saliva-based tests.

“A lot of students who go home on the weekends to Chicago or surrounding communities, they get tested over there,” he said. “There are some, for whatever reason, who are going to the Marketplace Mall testing. There are some others who were also going to private clinics such as Campustown Urgent Care.”

The University doesn’t have access to these testing records.

If a student, faculty or staff member tests positive somewhere else, that person’s case isn’t counted in CUPHD’s database, to avoid double-counting.

Vaid said the SHIELD team is skeptical of delays in test results contributing to the early on-campus spread.

“We looked at that data as well with the modeling team and with the SHIELD team as well,” Vaid said. “But there was no correlation that was found between that one or two day delay that we had during that one week with with any spike in the number of cases.”

Early issues of students breaking isolation and quarantine have been a lot less frequent, Vaid said, as well as students not picking up calls from CUPHD. Early on, a significant portion of students wouldn’t communicate with the health district.

Nowadays, the main short-term concern with the campus community is handling Halloween. CUPHD already issued guidance on how to trick-or-treat safely, and the team hopes the holidays won’t lead to major spikes in new cases.

“Even if you want to do things, you can make new traditions. You can do things much smarter and safer again. Not just for yourself or for your family as well,” Vaid said.