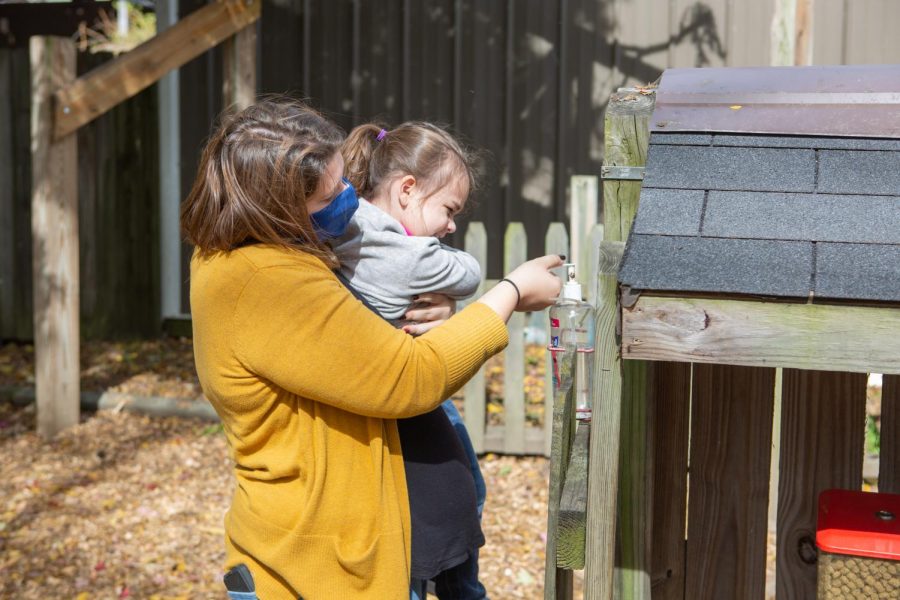 A girl and her mother use a hand sanitizing station at the Curtis Orchard & Pumpkin Patch on Oct. 14.

Every fall, groups of college students gather together at Curtis Orchard and Pumpkin Patch for a day full of picking pumpkins, walking in the corn maze, and drinking hot apple cider.

From RSOs and groups of friends to birthday parties and family reunions, Curtis Orchard and Pumpkin Patch give students and families a chance to catch up and create new memories.

However, due to the pandemic, things have been quite different. In order to keep everyone safe, Randall “Randy” Graham, the Vice-President and co-owner of the orchard, has put some new protocols in place: sneeze guards at registers, social distancing markings, mask requirements for employees and customers, consistent sanitation, and limiting the number of people on the farm.

“All of the protocols we have developed were done in conjunction with the public health department,” Graham said. “We collaborated with them to come up with the protocols and we are also following the guidance issued by the state. The health department got some complaints and when they came out to investigate, which is required of them, they were very satisfied with all the steps we had taken.”

Graham mentioned, though, that some people were not happy with the safety protocols. The two biggest issues he has experienced are people not wanting to wear their masks outside where social distancing cannot be maintained and people saying that there aren’t enough safety measures in place.

Lily Dawson, a graduate student in the School of Information Sciences, said that some safety protocols weren’t being followed.

“The store was really busy,” Dawson said. “There were a lot of people, so it was hard to be distant from other people. Everyone was wearing their masks, but at times it did feel like there were too many people inside. It was fine outside in the orchard because it was easy to not be around people.”

Despite the pandemic, Curtis Orchard and Pumpkin Patch have been thriving this fall. They have had a similar amount of visitors in previous years, but their pumpkin and apple sales have increased.

“We didn’t know if anyone was going to want a pumpkin this year,” Graham said. “We even wondered if they were going to care, with everything weighing them down from the pandemic and everything. But pumpkin demand has been remarkable. People want a sense of normalcy in any way they can get it.”

Another change Graham has seen this year at the patch has been the groups of people visiting. In the past, there have been groups of 50 or more students being bussed in from campus. This year, after the University lifted the lockdown, students have been coming in groups of ten or less.

He noted that the students have been very cooperative and that they always wear their masks.

“They want to get out and have some fun, but they recognize for that to continue — and to continue for others beyond their visit — they have to be responsible for their visit,” Graham said. “I have been very impressed with the students.”

Irene Ryu, a senior in LAS, visited the orchard recently.

“I felt like in the middle of the pandemic where you can’t really do everyday things and can’t be festive, going to Curtis really gave me and my friends some joy and a little bit of normal life, even though we were wearing masks,” Ryu said. “We were still able to go there and experience the fall vibes and take pictures.”

Dawson also said she had a wonderful time at Curtis, and it is something that Champaign should take pride in.

Graham mentioned that this year has definitely been interesting. They have made a lot of changes to their farm and will continue to tweak the process to make it as safe for their employees and customers as possible. Keeping everyone safe, while making sure everyone gets the most out of their experience is the main goal.

“We are just trying to stay open and keep everyone safe; if we don’t do this, we won’t be able to operate,” Graham said. “We are doing our best to give everyone a good experience and I know it’s not normal, but we just have to do it and get through it, and hopefully make some good memories out of the bad.”