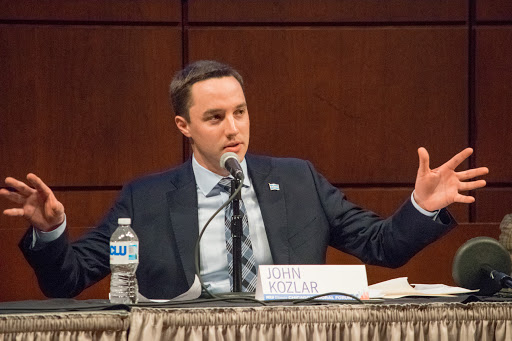 John Kolzar speaks at an event during the mayoral election in Chicago in 2019.

As young people in America contemplate their futures and careers, it can be easy to fall into a mindset of irrelevancy. They can believe nothing they do matters. Many young people have been conditioned to stress and worry about something at all times, while at the same time being beat over the head about how they can’t do anything about it.

In October of 2019, former-president ​Barack Obama spoke about his feelings on youth today in politics​. In discussing the rise of so-called “cancel culture”, he called out the judgemental attitudes of the group as “not activism. That’s not bringing about change.” He is not the first to call for more prominent youth action.

​Democratic representative Alexandria Ocasio-Cortez called for more young people to run for Congress and said, “Congress is supposed to represent the American people. One of the largest electorates right now are millennials and young people.”

This wall barring young people from entering the realm of politics is surmountable. The prospect of young people entering the political sphere, a thunderdome where senators and representatives carrying $100 million-plus net worths duke it out in public fashion, is a reality.

John Kolzar at 29-years-old, became one of the youngest candidates in Chicago’s mayoral history when he ran in the 2019 election against heavy hitters like Lori Lightfoot and Toni Preckwinkle. Kozlar got on the ballot for the election though he did not win the office. Nonetheless, he said he believes his youth will be looked at going forward. He discussed the extensive process in entering the race, and what steps one must take to get to such a position.

As to why he ran at such a young age, Kolzar explained his dismay with the seemingly dull system and said, “The same people were running in Chicago, the same politicians. The everyday people’s voices were not being heard, and the other thing is a lot of these politicians in Illinois, and throughout America, were usually much older. So I felt that the younger generation’s voice was not being heard.”

In Chicago, candidates are required to get 12,500 signatures to make it onto the ballot, all inked on paper petitions. The signatures themselves must be valid and will be reviewed by a professional counting process. While the process of getting the signatures is tiresome, it remains achievable without a vast amount of wealth.

Determination through petitioning on train platforms and bus stops can quickly rack up the number needed. Expanding that with the help of a few close friends, and a few extra hours in the evening, leaves it closer to possible than imagined. But once on the ballot, the grander challenge of getting your name out to the masses pops up.

“I didn’t have a million-dollar campaign like the other candidates,” Kozlar said. “We attended all the forums and debates, as well as maintaining a Facebook presence.”

Social media gives the younger generation a tool of massive outreach without the need for extensive funds. Anyone can get a viral campaign going with enough social media savviness and determination. Platforms like Facebook and even Instagram can provide an environment where millions can hear your campaign without having to leave your living room.

However daunting of a task it may seem on paper, undertaking actual political advocacy to have your opinions and ideas heard is completely possible, and a productive alternative to couch-ridded Twitter ramblings.

On a final bit of advice, Kozlar said, “Rule number one, is just do it.”