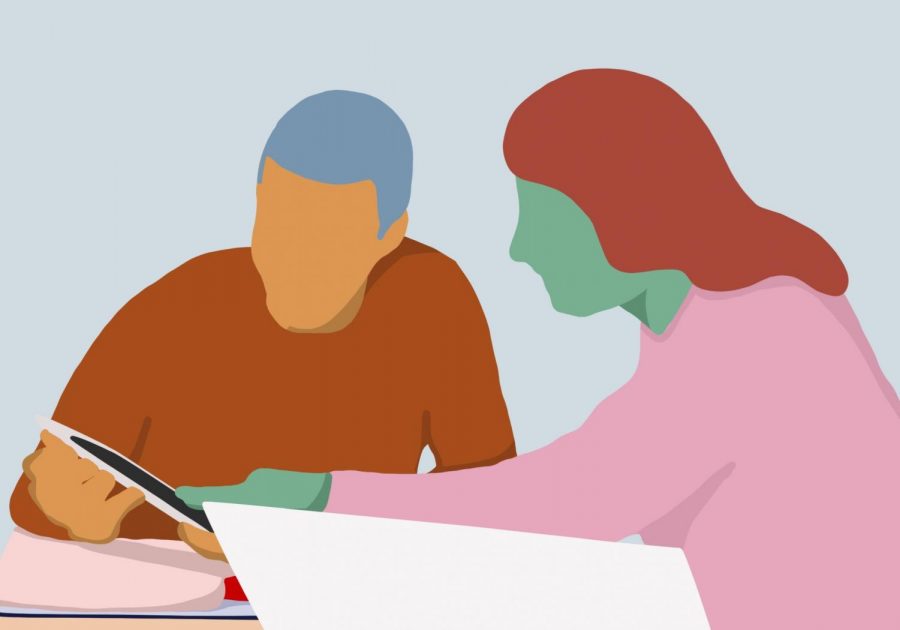 For Melissa Arroyo, current high school senior at Lane Tech in Chicago, and many high school seniors across the country, the college application left her confused. As someone who will be a first-generation college student, the applications, essays, scholarship forms and many other deadlines can be overwhelming and creep up with little warning.

After she heard about Üchange Scholars, an organization started at the Gies College of Business’ Three-Day Startup event, she contacted them in the hope of aid in the college application process.

From their website, Üchange Scholars is an organization that recognizes that “many minorities, financially burdened, and or first-generation students are unequally represented in American universities, and so [their] program aims to tackle these inequalities by offering services that will help bridge the gaps.”

Jenna Mukametkhan, junior in Business and co-founder of Üchange Scholars, said, “Our main goal is to increase social mobility in the long run and help underrepresented students specifically with the college application process because when founding this organization, we found that certain groups of people face a lot of challenges during one of the most important times of decision making in their lives.”

The not-for-profit organization pairs high school students at no cost with college students or recent college grads who are knowledgeable about the application process. They help with everything from advice on college essays, career searching and applications to looking for scholarships and deciding which school is the right fit for the student.

The mentor and mentee meet weekly for check-ins and to answer any questions.

“I first entered the program in late October, so if it wasn’t for them, I don’t think I would’ve started the college process,” Arroyo said. “I felt like I was pretty late, and I wasn’t even sure how to start the process, so when they contacted me, Jenna, my mentor, helped me prepare for that and helped me get in my application for the early action deadlines.”

Kristine Xie, a sophomore in Business and a Üchange Scholars Head of Marketing, said, “During my college application process, I really had no direction at all because at age 18 I didn’t know what I wanted to do with my life at all and so having a mentorship program like Üchange Scholars would’ve been so beneficial at the time.”

While high school students usually can get help from their counselors, the help they receive might not be super individualized due to how many students the counselor needs to look over. Üchange Scholars helps this by having one-on-one mentoring.

Michael Farrell-Rosen, Freshman at Brown University and a Üchange Scholar Mentor, said that he felt that there are many places where people don’t have the same opportunities in the college process due to disparities in education, socioeconomic status, systemic racism, and other barriers, which can lead to unfairness in the college application process. This is the main reason why he wanted to join Üchange Scholars.

“I’ve seen how successful people can be when they have the support and mentoring, all the guidance counseling, and the help on the essays and everything that comes in the college application process,” Farrell-Rosen said.

Mukametkhan said that being a mentor in Üchange Scholars has even changed her outlook on her future career, as she now wants to do something that has an impact on someone else’s life.

She said that she has also had some heartwarming experiences in Üchange Scholars. She said that her mentees have expressed a lot of gratitude for the help. One of her mentees said that when she gets into a college, Mukametkhan will be the first person she tells, even before her mom.

So far, Üchange Scholars has had four mentees in their program, but this spring they will have 20 and are still hoping to expand.

Talia Farrell-Rosen, a 2020 graduate from the College of LAS and Üchange Scholars co-founder, said that Üchange Scholars is looking into expanding to other college campuses across the United States in the future.

“We would like to help people all over the country because there is such a big need that isn’t being met,” she said.

The second group of mentors and mentees will start in March and they are still actively recruiting high school juniors. Recruiting mentees has been a struggle for the group, but they are reaching out to high schools. After recruitment, Üchange Scholars will help the mentee through every step of the college process.

“Üchange has really helped me as a first-generation Mexican student and helped me along the way to better understand the college process and be less fearful,” Arroyo said.

Editor’s Note: There was a spelling error and a title error that have since been corrected. The Daily Illini regrets this error.