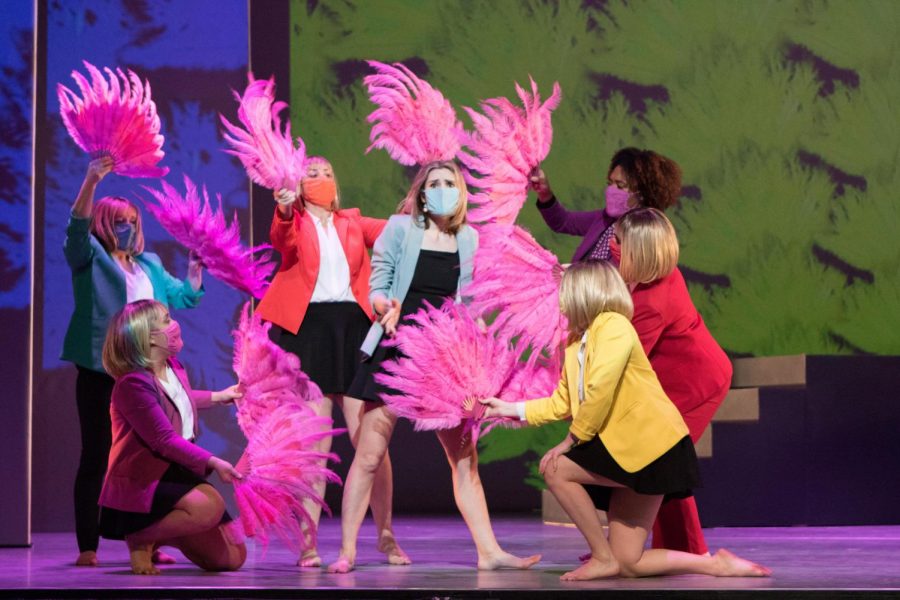 University students perform in the dance “I’m Ally!” choreographed by Rachel Rizzuto on March 20 at the Krannert Center for Performing Arts. The shows went without a hitch despite having to follow COVID-19 restrictions.

When an artist has an idea, they will stop at nothing to share it with an audience. At this year’s March Dance, these artists have also shown they will find ways to come together and share their stories despite COVID-19 limitations.
Four performances were put on at the Krannert Center for the Performing Arts, each one choreographed by Master of Fine Arts students Danzel Thompson-Stout, Roxane D’Orléans Juste, Rachel Rizzuto and Jaylen De’Angelo Clay.
“When putting on a show during COVID-19 times, there’s so many limitations, but for us as artists, you know that artists take limitations and we run with them,” said Anna Sapozhnikov, assistant head of program administration and engagement.
These limitations for the performers and crew ranged from dancers not being able to touch each other to less in-person meetings. Even access to the set was limited until the weeks leading up to the performance.
“We had pictures of it, discussion of it in November but we couldn’t use it until we came back,” D’Orléans Juste said. “I had to think and gave myself the week of winter break to think about how am I going to keep the work I am trying to do and have this platform enhancing those ideas.”
The hard work for performers and crew started well before this year even began. Choreographers and dancers started their practices as early as September and increased the amount of practice time after returning from winter break.
“Around December is when we started getting in contact with choreographers,” said Kayla Sierra-Lee, sound designer. “That’s where I started asking choreographers what their needs are if they need any composition work done or what their vision is.”
With these added difficulties, however, came innovative new solutions and designs for the performances, such as ‘talkbacks:’ a portion after the performance when choreographers answer questions posed by audience members.
“(‘Talkbacks’) definitely give you some insight to what the shows are about and why the choreographers chose to do what they did for each show,” Sierra-Lee said.
Another addition to this year’s March Dance was live streaming each event in order to reach those who could not attend in-person due to limited attendance.
Costume designer Vivian Krishnan said she had to alter costumes for the quality of the livestream.
“You might look out on stage and think ‘wow that lighting looks perfect on that person, yes, that’s looking good,’ then you look at the monitor and you’re like ‘I can’t even see my dancer right now,’” Krishnan said.
Sierra-Lee explained how the sound crew was strained with the addition of a livestream.
“You’ve got essentially three different mixes,” Sierra-Lee said. “You have what your dancers hear, what your audience in the house hears and what your viewers at home hear, and you have to constantly be thinking about that throughout the show.”
However, despite the struggles all the cast and crew went through, Sapozhnikov said they were able to put on a performance they are very proud of.
“Those limitations created some really beautiful choices and happenings that you saw on stage but getting there I know was difficult for everyone involved,” Sapozhnikov said.
Even with difficulties in acquiring material for costumes, Krishnan was able to design and create most costumes with natural materials and dyes.
Sierra-Lee said she is impressed with the choreographers working around limitations and that even though she saw each performance over 40 times, she noticed something new every time.
Although the performances will be taken down on April 5, Sapozhnikov said they will probably remain on KCPA’s Vimeo page for at least a couple days afterwards.
Dance at Illinois will also feature other livestreamed events in the future, with Studiodance II happening on April 2 and Senior Concert on April 31 and May 1.