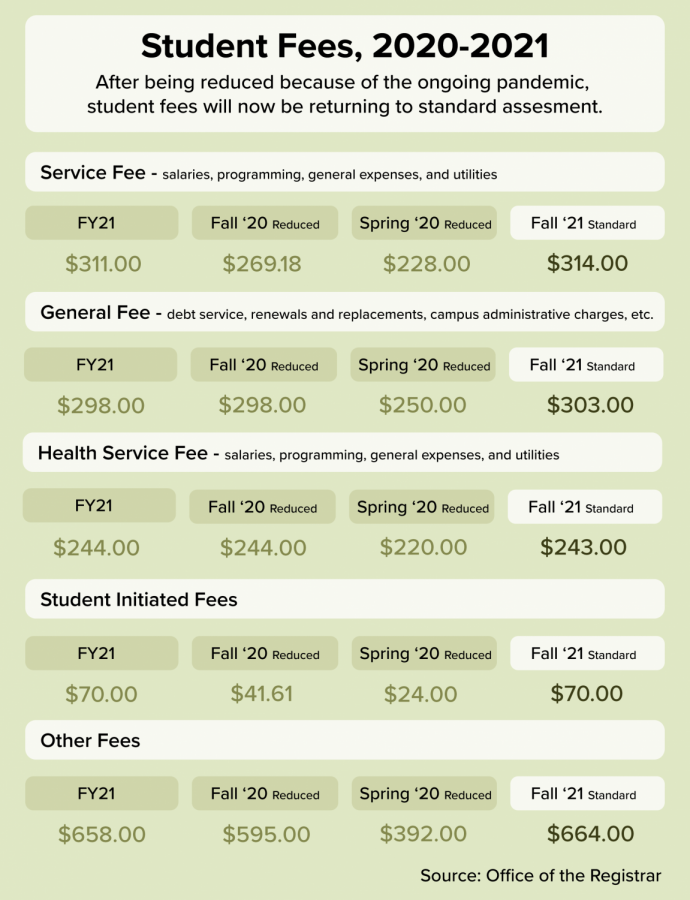 Of all of the elements of normality that have been shattered by the pandemic, at least one is guaranteed to return by the fall semester–student fees. According to a Massmail sent out on March 26, the University will reinstate the standard fee assessment which had previously been lowered.

Over the past two semesters, student fees had been lowered during the pandemic, with every category lowered by at least $50 for students. Alongside lowering fees for University services and facilities, seven of the 12 student-initiated fees were eliminated entirely, including initiatives such as Bicycle Programs & Infrastructure and the Cleaner Energies Technology.

Brian Farber, the executive assistant to the associate vice chancellor for Student Affairs, provided feedback about the decision to change fee assessment and described how the decision to move back to a standard fee assessment came out of anticipation for pre-pandemic conditions and as a way to fund programs which had incurred higher expenses due to the pandemic.

“Whenever we make reductions, similar to what we did in the fall and the spring, of 20 to 30%, it has a significant impact on continuing expenses that we experience during the pandemic,” Farber said.

Farber cited specific expenses such as debt service and mortgage payments as some of the continuing expenses which are usually covered by the student fees, alongside the salaries for the employees in these units. Utility costs also increased during the pandemic, due to increased concerns over filtration in University facilities.

Despite these increased costs, the University’s decision to return to standard, higher fees for students is not an attempt to recover from the expenses which the University encountered last year, but rather to return to the normal operations of the units normally paid for by student fees, according to Farber.

“We’re grateful for the federal government’s assistance with relation to the CARES funding that has come, both the first and second round of funding and the American Rescue Plan that has been approved and hope to have some funding from that as well,” Farber said.

The structure by which fees will be assessed will fully emulate how fees were assessed pre-pandemic. While the University has indicated that online classes will still be available for fall of 2021, students will not have any reduced fees for living outside of the Champaign-Urbana area.

The anticipation of pre-pandemic conditions was influential in the decision to return to a standard fee assessment.

“I certainly hope that August is going to look very different, and a lot of that is based upon our aggressive efforts in vaccination in the state, and efforts to try to vaccinate the student body, hopefully even before (students) all leave for the rest of the semester,” Farber said. “We’re hopeful that we will return to a fall that looks very much like it would have looked before the pandemic began.”