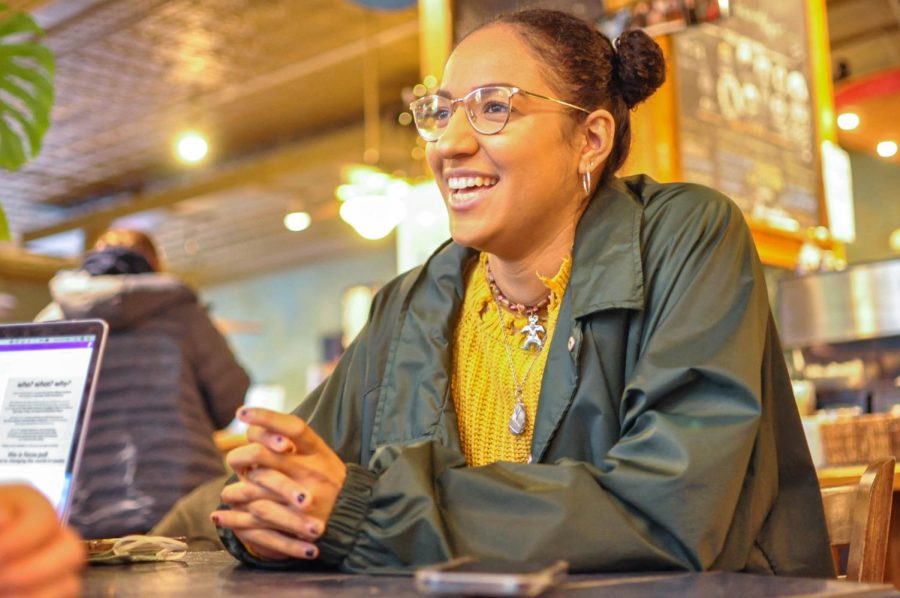 Filmmaker Kat Williams, senior in the College of Media, hopes to inspire other Black student filmmakers with her organization Focus Pull.

Kat Williams is not only a film creator but also a creator of spaces for other Black student filmmakers, aiding them in collaborating and learning more about filmmaking via Focus Pull, an organization she founded.

Williams, senior at the University, is majoring in media and cinema studies. She is obtaining minors in critical film production and creative writing, and she also has a certificate in international development studies.

Williams, known creatively as aristokatic, began experimenting with filmmaking in high school, and she said she’s always known she wanted to be a storyteller.

“I always knew I wanted to work in the industry in one way or another,” Williams said. “Nothing else has just ever really held my interest for very long.”

Williams is the founder and president of Focus Pull, an organization she founded in June 2020. Made by and for Black student filmmakers, Focus Pull promotes Black creativity in the film industry.

She said she formed Focus Pull in reaction to the racism she saw in the entertainment industry, and its creation was also partially influenced by the large number of Black Lives Matter demonstrations during that period.

“I’m not particularly educated or aware or helpful when it comes to policy and government and things like that,” Williams said. “But I do know movies, and I know that there’s a massive lack of Black people who make movies and who are in movies, so I just wanted to change the way that works.”

“It can just be really hard to find your people sometimes,” Williams said. “So, I wanted to just make that possible for future kids here to make it easier to just kind of navigate existing at a white institution as a Black kid and also as a Black kid who wants to make movies.”

The name “Focus Pull” references the focus puller’s role on a film set. Williams said a focus puller controls the focus of the camera lens, choosing what is blurred and what is focused.

She explained how people of color, especially Black people, are typically blurred into the background of history and the film industry, saying, “We’re a big part of everything that happens, but you never really see us.”

“I want to be changing the focus of the media industry to more so highlight what our community does and the talents within our community and just foster that,” she said.

Williams also mentors the underclassmen in Focus Pull. She said it’s fun to see students growing as creatives and developing those skills, and she sees a younger version of herself reflected in the students she mentors.

One of the hardest aspects of filmmaking is writing the script, Williams said, because she has to find inspiration before beginning to write, saying the creative process is a “nightmare.”

“Inspiration-wise, it makes me nauseous to even think about,” she said. “Like, ‘Oh, a creative thought.’ That’s so terrifying because then it’s just going to become my baby, and I’m going to have to make it, like everything is going to take over.”

Despite the pressure of deadlines and scriptwriting, Williams said one of the most rewarding moments of filmmaking is seeing the finished product and showing it to others.

“I really like when things come out, and I watch it with other people, and I know that a really cool shot is coming up, and then I get to watch them see it,” she said. “I think that’s really fun. It makes me happy.”

“Gay Card” is one of Williams’ favorite projects she’s worked on. It was also the longest project she’s worked on; the finished film was just over two hours. It was her first time having a major role on a feature project, and she had the opportunity to take many creative liberties and decide how she wanted to convey moments on screen.

Williams said she’s open to many avenues of filmmaking – like producing, show running and directing – once she enters the film industry.

“Anything would make me so happy,” she said. “Anything where I just get to be part of that process and make those stories happen.

“If you want to make movies, make movies. If people are telling you that’s not a viable career option, they’re wrong. OK, that’s the moral of the story.”