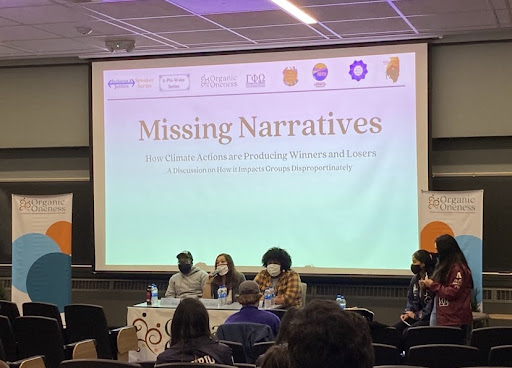 The non-profit social justice RSO Organic Oneness hosted environmental experts from Chicago as a part of their Exchange for Justice Speaker Series with the Gamma Phi Omega sorority. The event was titled, “Missing Narratives: How Climate Actions are Producing Winners and Losers.”

Three guest speakers visited the University to conduct a conversation, hosted by the nonprofit, social justice RSO Organic Oneness as a part of their Exchange for Justice Speaker Series as well as the Gamma Phi Omega Woke Series, regarding the disproportional effect of climate change on marginalized groups affected by racism and capitalism. The event was titled, “Missing Narratives: How Climate Actions are Producing Winners and Losers.”

The panel consisted of Amaris Alanis-Ribeiro, director of the North Park Village Nature Center of the Chicago Park District, Olatunji Oboi Reed, CEO and President of Equiticity and Anthony Tamez-Pochel, Steward of the First Nations Community Garden and member of Chi-Nations Youth Council.

Buzz had the opportunity to talk with these speakers about their purpose behind coming to campus and the importance of their messages.

buzz: Why is it important for you all to be speaking out about these issues in a college campus environment like this one?

Olatunji Oboi Reed: These are the future leaders. They come out of this school and they are going to the city government, working for the state, corporations and nonprofits. We want them to champion what we are talking about, so I’m willing to come teach these young folks who need some lessons.

Anthony Tamez-Pochel: I think it’s important for people to hear native perspectives, especially a campus who’s history has been very violent toward native people. Just being able to come here, share what we are doing in Chicago and break down the narrative of old white men not doing this work. It’s our youth of color who are on the ground doing the work and doing the labor.

Amaris Alanis-Roberio: Education is a space where this conversation can happen, and this a formative time to transition to make more decisions, whether in your place of employment, what you do at your job, how you ask for change at your job, what you buy or your choices. These are the formative years. Education has become a space where we have to have these conversations and why not with college students. It’s time.

buzz: Because of the school’s history with the land it is built upon, what do you think the University can be doing to further honor and respect the Indigenous people whose lands were stolen?

AT: They should do tangible things like hire native faculty and staff. They can host more things that involve native people. They can bring in Indigenous elders or peoples from native communities to teach classes. It’s that same sentiment of holding Indigenous knowledge systems at the same level of Western knowledge systems.

buzz: Because of the rise of performative activism on social media, how can young people do better at amplifying minority voices from informed sources without only taking performative steps?

AT: You’re spending thousands of dollars to go to a university and one of the main things they teach you is to look into the sources of things that you cite or talk about. Make sure that things that you’re sharing are coming from frontline communities or are in some way helping frontline communities. Also, be calling out performative activism because it is very clear when things are performative, so use your platform to call it out.

buzz: If community members of the Champaign-Urbana community and students at the University had to take away one thing from your conversation, what do you hope that thing would be?

OR: Dismantle structural racism in a real, tactical and strategic way. I’ll give you an example: About three to four years ago, the mayor of Chicago said in a press conference that there was racism at the Chicago Police Department. He said it publicly. Around the same time, the commissioner of the Chicago Police Department said, publicly, that there is racism at the Chicago Police Department. That is step one in what we consider to be the healing process. Step one is to acknowledge the harms; acknowledging there is racism is the key to acknowledging the harm because racism is harms inflicted on marginalized racial groups. Step two is to apologize. Step three is to repair the harm. They didn’t do step two and they didn’t do step three. They acknowledged racism in the most powerful institution in our city; there is no more powerful institution than the Chicago Police Department in our city. What the mayor did and what the police commissioner did, by not apologizing, repairing the harm and strategically removing the racism that they said exists, is allow it to continue to harm us. We should all be figuring out, within the systems we’re engaged in, what am I going to do to dismantle structural racism in this system. You don’t have to think about it too big. In your environment, how do you dismantle structural racism. Any injustice, every injustice, experienced by Black, brown and Indigenous people is rooted in structural racism. You should ignore racism, you are allowing the harms to persist. Is that what we want? Then, tackle structural racism.

AA I would add, because I’m an educator and I have to think of the curriculum, this university is known for agriculture and engineering. There is so much you can do in agriculture to think about the different Indigenous practices, food access, the choices we can make in the education and the department. When we are designing built environments and energy, we need to be thinking about this just transition and climate justice. The college students can take environmental justice principles as a guiding document and operationalize that in the university; ask for that in the curriculum and ask for it in policies. I think there are ways and resources that we can make changes with. Being a Big Ten and a university leader in those particular areas, there’s a lot that can be done environmentally.

You can find the full discussion on the Organic Oneness Facebook page. Stay updated about more Exchange For Justice events on their Instagram @organiconeness_uiuc