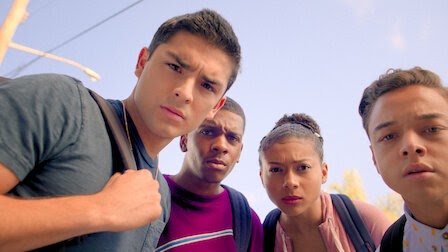 Screenshot of “On my Block.” The series finale of the show premiered Oct. 4.

Fans of the popular Netflix series “On My Block” will be disappointed to know that the series’ latest season release is also its last season. Season four of “On My Block” features the reunion of the beloved friends, Monse, César, Jamal, Jasmine and Ruby. The characters of the drama series have always been forced to grow up at a young age.

In the third season, Monse, played by Sierra Capri, was skeptical of the opportunity to leave her hometown and attend an all-girls high school in another city but ended up exploring her identity through this opportunity. Season four explores Monse’s connection with her father who tells her the bad news: They can’t afford to send her back to her high school. This means Monse will have to reconnect with her old friends and lover, César, all of whom she hasn’t spoken to in nearly a year. Though she is initially anxious at the thought, she ends up reconnecting with her friends in a way she has never thought she would have to: A body they are responsible for murdering was found. This season explores the aftermath of the crime and the reconnection of the friends who continue to form a strong bond. Now that all five friends are in their last year of high school, they have some difficult decisions to make.

In the previous season finale, fans have seen César, played by Diego Tinoco, ultimately make the difficult decision to join the Santos, Los Angeles’ gang that his older brother Oscar, AKA “Spooky,” essentially grew up in. Oscar and César’s relationship has always been rocky, as they both grew up without a strong parental figure. This season focuses on their relationship in a way past seasons have failed to capture. Oscar, played by Julio Macias, was released from prison and decided to turn his life around and become the role model César needs. While preparing to welcome his baby with his love, Isabel, Oscar risks it all to save his brother César from getting into more trouble, even if it means putting his own life on the line.

This season continues to explore the confusing relationship between César and Monse with yet another classic love triangle. While fans will see bits and pieces of César’s soft spot, this season would have benefited from more character development from him. Perhaps facing the most challenges throughout the series, César’s character deserved to overcome more challenges than he did, and his story was often overshadowed by the other characters, which was disappointing.

Ruby’s character, played by Jason Genao, was the strongest developed character over the last four seasons. Throughout the first two seasons, Ruby was faced with challenges no high schooler should have to face, like being shot and nearly killed. Season three depicts Ruby beginning to overcome his trauma, while season four shows what kind of person Ruby would be if he stopped letting fear get in the way of taking risks. Ruby finally allows himself to gain the closure he really needed through his relationship with his shooter and his relationship with his true love, Jasmine.

Jasmine, played by the hilarious and bubbly Jessica Marie Garcia, explores what her relationship with Ruby truly means to her. Jasmine started off as a minor character but grew to be the star of the show. While the other friends were stressed out about real-world issues like going to prison, murder and being followed by ominous gnomes in mysterious places, Jasmine was worried about which dance move she would dazzle her classmates with at their senior prom. Though she had a slow start, Jessica Marie Garcia’s comedic energy truly stole the spotlight in “On My Block.”

This season highlighted a complete opposite side of Jamal that fans haven’t seen before. Jamal, played by Brett Gray, finally becomes the most popular guy in school, though he finds the amount of girls who are now in love with him unbelievable. In previous seasons, fans have seen Jamal as the self-described “geek,” so the ability to see the rest of the school viewed as cool was a refreshing twist. Throughout this season, Jamal explores how his newfound popularity affects his personality and his relationship to his friends. He ultimately ends up choosing his friends over the numerous girls nearly falling at his knees.

The Latinx representation in “On My Block” is refreshing to see from Netflix, especially since Netflix lacks representation of the younger Latinx community. Fans of “On My Block” can expect to feel bittersweet after watching the series finale as well as feel a satisfying sense of accomplishment. Fans really did watch these characters grow up over the last four seasons, and most of them did get the happy ending they deserved.