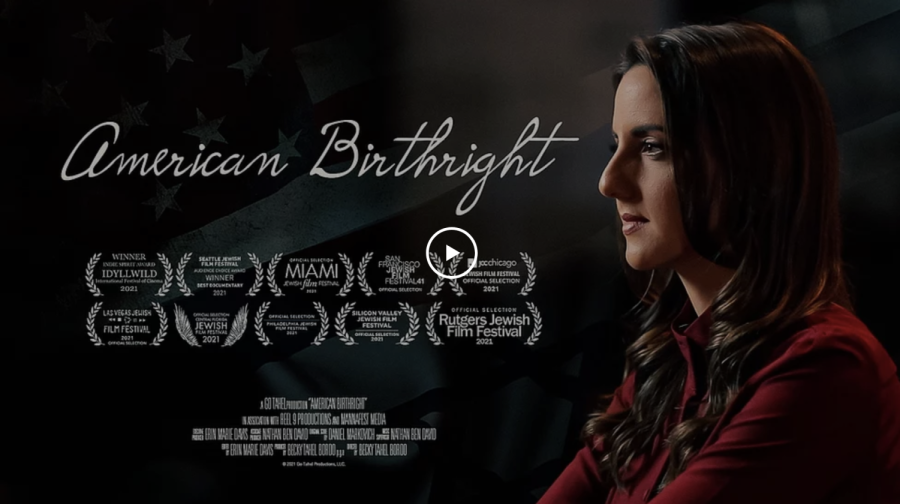 The movie poster for “American Birthright” is shown above. The film is being shown at JCC Chicago’s annual Jewish Film Festival, which starts Nov. 5.

Ilene Uhlmann and Hillary Wenk, the festival’s curators, said the festival has been a success in the past.

“It amazed me that at a small Jewish film festival in a small town near Chicago, people really enjoyed it; we viewed it as a way of bringing people together,” Uhlmann said. “It’s really grown from what started as a small festival of 12 films and 800 people. In 2019, there was a total of 18,000 attendees.”

Uhlmann and Wenk said they view the outcomes from the pandemic as finding a way of providing people with opportunities to view the festival in a way they have never been able to before. Bringing the film festival to a virtual platform has allowed people from all over the Midwest, and even the world, to participate in the festival.

The festival curators are particularly excited about the opportunity to speak directly with the filmmakers this year as part of their post-film discussions.

“The great thing about the Jewish Film Festival is we typically have a discussion after the films, but Zoom showings have been allowing us to talk directly with the movie creators live, adding a layer of enrichment to the filmgoers, and it’s been wonderful to have access to so many interesting people,” Wenk said.

This year, the festival will consist of more documentaries and fewer narratives as these types of films were easier to produce during the pandemic.

“There will also be a nice selection of Israeli films, English-speaking films, Holocaust films, things that will just inspire and just get conversations started,” Wenk said.

This is an important festival for the curators not only because of their passion for film and artist culture but also because of their opportunity to share their love of Jewish faith with other people.

“Our goal is education and inspiring connection to Jewish communities,” Uhlmann said. “For some Jewish people the only Jewish thing they are going to do this year is watch a film. Watching something where they can see themselves reflected in notes of the film, that is enough to inspire a connection to their Jewish self.”

Uhlmann’s favorite part of the festival is hearing the viewers talk about the film as they leave the theater.

Wenk explained that when the festival was first launching most of the videos were about the Holocaust. In the last few years, the variety has really expanded and now covers stories about humor, comedy and love stories, Wenk said.

Uhlmann said one of her favorite films from this year’s festival is “American Birthright,” where the main character goes on a journey of religious growth when she finds out her Jewish sister is marrying someone who is not of Jewish faith. The film follows the characters grappling with the question of why is it important to be Jewish.

“The main character really goes on this journey, and to me, it’s a very Jewish film; her search to answer these questions,” Uhlmann.

The festival will begin Nov. 5, and all films will be shown live on Zoom with a discussion with the filmmakers after the viewings.

The film curators said they forward to planning their next festivals, including a social justice festival in January and a hybrid festival in March.