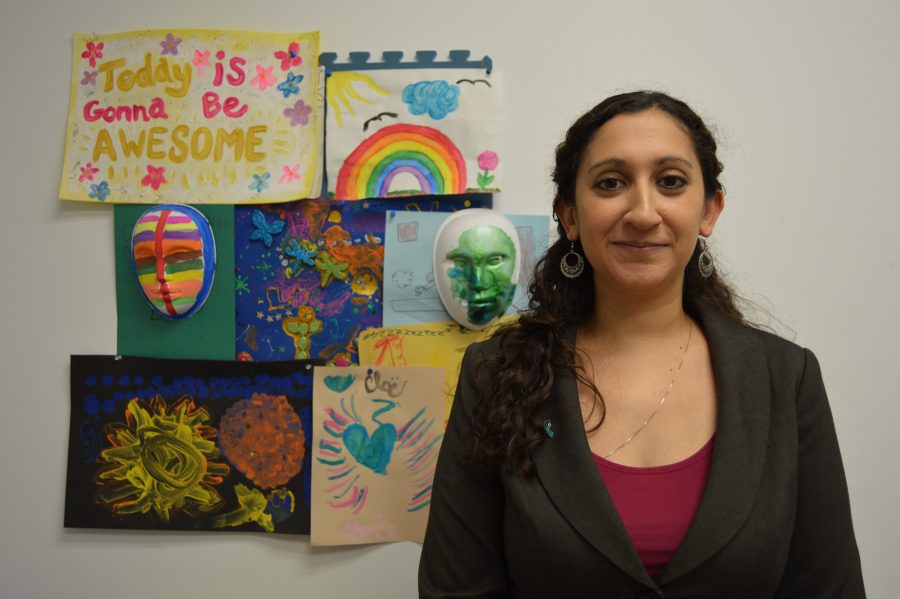 Jaya Kolisetty stands in front of paintings at the Rape Advocacy and Education Service center in Urbana on Sept. 7. RACES runs out of funding on Dec. 31.

Illinois has gone eighteen months without a long-term budget. A stopgap funding measure gave some reprieve, but the state-centered money runs out on Dec. 31, leaving local social services scrambling to find additional funding.

The Rape Advocacy, Counseling, and Education Services, RACES, located in downtown Urbana, has experienced tremendous consequences from the budget crisis, which forced the center to lay off almost all of the staff and to discontinue most services last May.

Interim Assistant Director Jaya Kolisetty, currently the only salaried staff member at RACES, said she went to part-time over the summer and was waiting for the state to make a decision regarding funds before returning to her full-time position.

“It’s very strange going from a staff of seven full-time people and four interns and a couple of part-time educators down to one person,” Kolisetty said, looking around the empty office.

In the past, RACES, one of the first rape crisis centers in the state, provided free and confidential counseling for victims of sexual assault, prevention education, legal advocacy and in-person crisis intervention services.

“We’ve been very carefully using those funds to make sure we try not to take advantage of state funding for the short term,” Kolisetty added. “We’ve been very fortunate in that the United Way (of Champaign County) gave us a $25,000 grant, which is really what kept our door open.”

Sean Black, the communications coordinator of Illinois Coalition Against Sexual Assault, said the state-funded sexual assault program normally receives $4.6 million from the Illinois government to disperse across the 29 centers, including RACES.

Black said the Coalition receives about $14 million to $15 million in federal funding, but the funding comes with many restrictions.

“The general revenue funding is really crucial because it’s what keeps the doors open. It doesn’t have the restrictions on it that other funding does,” Black said. “Many rape crisis centers have to take out lines of credit or other avenues.”

Black said the decreased budget is resulting in a “drain” on communities, with people in need of specific services which cannot be offered.

“I think overall, the budget impasse has been a tremendous negative to services across the state in all aspects of social services,” Black added. “It’s been a really difficult year for rape crisis centers and also for the state.”

When the budget crisis began to hit RACES in September 2015, Kolisetty said that the center did a lot of fundraising throughout the community, which helped programs provide services longer.

Right now, Kolisetty said one of her main intentions is to maintain an established presence in the community, since RACES serves Champaign, Douglas, Ford and Piatt counties.

“That’s something we really struggled with, because people thought when we reduced services we closed,” Kolisetty said. “And we want to make sure people know that there are still crises services and we’re working on bringing back those prevention programming and long-term programming and counseling services.”

An even mixture of students and community members would utilize the counseling services at RACES in the past, according to Kolisetty.

College-aged women are “at an elevated risk of sexual violence,” according to the Rape, Abuse and Incest National Network, allowing RACES to fulfill a specific need in the Champaign-Urbana area.

In addition to RACES, Illinois students have the opportunity to reach out to the Women’s Resource Center.

“I get a number of people from the community looking for support,” said Joan Wingo, a secretary at the Women’s Resource Center on campus. She said she has noticed an increase in community callers in the past year.

But calls to the RACES crisis hotline have stayed about the same, Kolisetty said.

“We do see people who were clients before call a little more, maybe because they don’t have that regular way of checking in and talking to their counselor,” Kolisetty said.

Even with the budget in a state of limbo, RACES is planning on expanding its services, growing to what it once was.

The center plans on hiring an executive director and a counselor, which Kolisetty said is a good direction for the center.

“Even though things are very uncertain, we’re feeling more hopeful,” Kolisetty said. “We’re excited to be bringing on more staff members, and we’re just being very strategic on how to utilize other funding sources, because we’re not holding our breath, but we’re determined to get those services back up and running as quickly as possible.”