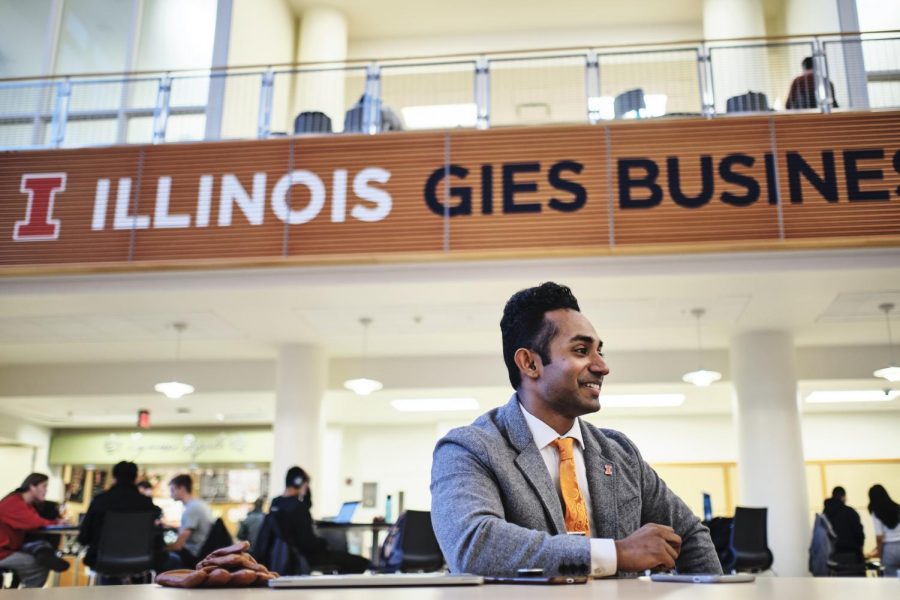 Manu Edakara, Associate Director of Entrepreneurial Communities for the Gies College of Business, speaks about his personal experiences as the leader of iVenture Accelerator at the BIF atrium on Monday. He earned the Forbes 30 Under 30 honor.

Manu Edakara is the associate director of Entrepreneurial Communities for the Gies College of Business and leader of its iVenture Accelerator, a resource beacon for student startups. iVenture takes no ownership stake in the startups it helps. Before that, the class of ‘14 Illinois graduate was a technology entrepreneur.

Edakara came away with a renewed business perspective and a desire to give back to his college community. Last Tuesday, Edakara was honored in the education category of Forbes 2020 30 Under 30, alongside several members from three iVenture businesses. He sat down with The Daily Illini’s senior reporter Ethan Simmons to discuss the award, his career and the future of campus entrepreneurship.

DI: Let’s start at the beginning. Describe the moment you found out you made Forbes 30 Under 30 list for education.

Manu Edakara: It was almost like unwrapping a Christmas gift. I had some good indicators, but I couldn’t unwrap it until Tuesday morning. I felt a deep sense of satisfaction. I was glad they were recognizing the work that we’re doing here, and it was a very joyful moment for sure.

DI: How would you describe your position to someone who has never heard of iVenture?

ME: I help young people that have ideas who are working on projects they want to make into businesses or other kinds of movements. I help them build those dreams.

DI: What was that transition like from doing your own startups to educating people on it? Did you feel well-equipped at the time?

ME: Definitely not. I had no idea what I was doing. When I first got the role, I was overwhelmed. So professor Noah Isserman, who is co-founder of iVenture Accelerator, he gave me some good counseling. He was like, “Part of being a good leader and a coach is not having all the right answers but helping the students find the right answers.” Why don’t you just ask “why?” or “what do you think?” I incorporated that a lot and became a good listener, really empathetic. That helped me work through problems.

There’s no hard and fast rule. The answer is no one knows, and things go wrong all the time.

DI: Members from three iVenture graduates (MakerGirl, OptiVolt Labs and Cast21) all made Forbes 30 Under 30. What is it like for you to see their success post iVenture?

ME: I can’t take credit for those teams. As far as how it makes me feel, all of them are my homies. I text them all the time. They’re great people, and to be quite frank, it doesn’t surprise me. Ashley’s been named to 20 under 20, Julie and Lizzie have been recognized all over the country for their work, and Rohit is a Thiel Fellow.

It’s a great honor, but we hold our students to standard of excellence where they should be doing cool stuff.

DI: What has iVenture taught you about entrepreneurship?

ME: A lot. Startups are intensely personal. You have to be comfortable with failure. Not necessarily failing and your venture folding but in trying out different ideas. True failure is when you stop trying. You can always pivot.

Whatever you start with, try to build it as cheap and lean as possible, get it out into the hands of people. They’ll tell you what to fix. Reiterate and put it out there again.

ME: Batman. When you look at Batman, he was born out of tragedy. I know he’s kind of an Übermensch, and no one can actually be him. I like the idea of training yourself, building yourself with a goal. His whole goal is to make sure no kid suffered like he did.

DI: Do you consider being under 30 an advantage? Why?

ME: It must’ve been a shocker to some people that I was under 30. Being young in this role certainly has an advantage. Students feel comfortable with me. I just live in an apartment on campus, I go to the ARC a lot, go to all these clubs and no one knows who I am. It’s an advantage because there’s no real barriers.

DI: What is the one failure that’s provided the most growth for yourself and your entrepreneurial dream?

ME: I’ve got one, but it’s serious. One of the reasons I left AdCat, my second company, was my good friend from middle school called me and told me his little brother had gone missing. The little brother was schizophrenic and bipolar.

I got his face on a billboard on the highway. I turned the basement into an FBI spot with a timeline and photos. I called my friends at Google, and we hacked his social media. I treated it just like a venture and only because my friend asked me.

At the end of the week, a police drone found his body at the bottom of a gorge. That was the first time I really felt failure. It was different than laying off employees or getting ousted by your parents because you’re doing a career that’s not culturally acceptable. We did all this work, we searched, we didn’t think twice about prevention. That was visceral and personal.

I know it’s not the most uplifting subject, but I think it brought our community together in a way that it never had before. We know we’ll do anything for each other. When you talk about failures and successes, I think most people look at their personal lives. 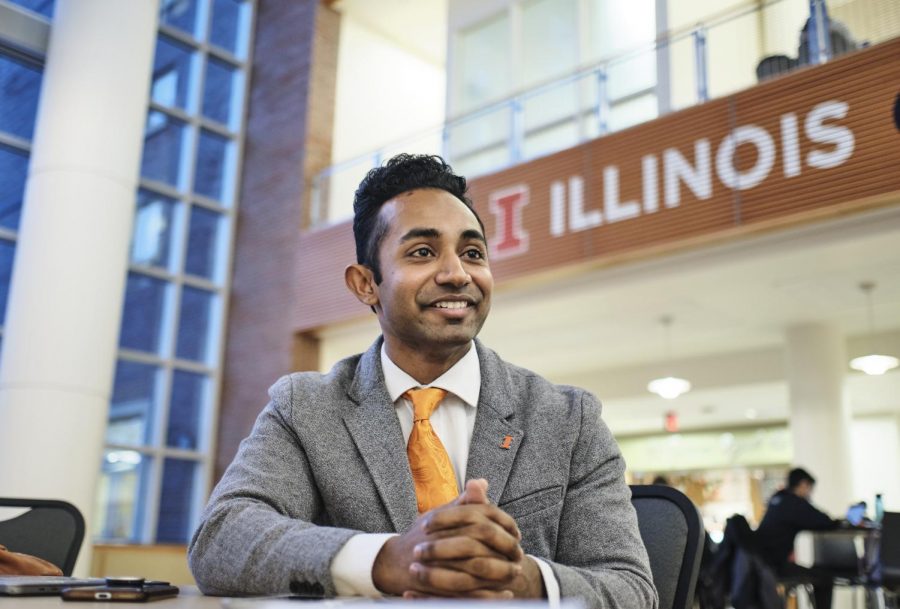 DI: What’s on the horizon for you as well as iVenture?

ME: I think a huge focus on inclusion and diversity. On our campus, certain people think of themselves as entrepreneurs while to others it’s a completely loaded term.

We’re slowly seeing that. The last couple iVenture cohorts have been 45% female founders and 25% underrepresented groups. When you look at national averages of where the money is going, I think 2% of venture capital money goes to female founders, which is insane. We want to hear different voices. Diverse teams are stronger teams.

Last week was our next round of iVenture applications. We’ve got to admit the next generation of entrepreneurs. This award changes nothing. We’ve got great work to do here, and we have great people supporting us. I used the Batman analogy; there’s tons of Robins; there’s a whole Justice League. I’m very happy to be a small part of this entrepreneurial ecosystem.

DI: Who were the key mentors that have helped you in this job and entrepreneurship experience?

ME: It really does take a village. First would be my department, the Origin Ventures Academy for Entrepreneurial Leadership. I know it’s a mouthful. There’s only four of us, and our programs including the iVenture Accelerator permeate all across campus. One would be our senior director John Quarton. He’s been a stalwart in supporting me, incorporating me into leadership talks and always being positive.

Valeri Werpetinski is our associate director of entrepreneurial education, and she runs social innovation here. A lot of her programs have been first of their kind. Women in Entrepreneurship, 3-Day Startup with the folks at social impact, Entrepreneurs Without Borders. Those things have really helped us expand the definition of what it means to be entrepreneurial. So it’s not just white, male, Asian, engineer, software, app. It can be cultural projects, social projects, and that’s been really pivotal in cementing our spot on campus.

My colleague, Noah Isserman, he’s the co-founder of this program. He’s amazingly brilliant, very patient. This whole team is like a family. John is like our cool dad, Valeri is like our cool aunt and Noah is like my big brother.

The entrepreneurial ecosystem is very important. The Technology Entrepreneur Center, Illinois Ventures and Research Park. All the leaders there have supported us. They’ve supported me through coaching, and they’ve actually helped me select teams in the Accelerator.

The reason I’ve had a good time in this role is because of the students. My schedule is pretty intense. I don’t know how many hours I work. What keeps me going is passionate student entrepreneurs. If you have students creating apps that teach thousands of people how to play the violin, nonprofits that are educating young girls in India, screening products for oral cancer. These are things that are tough not to get fired up about.

I do want to thank a few colleges. The College of FAA supplies our workspace over the summer in Temple Buell Hall. The School of Social Work, where this idea came out of. The Grainger College of Engineering, which supplies the majority of our students. Definitely the Gies College of Business. The leadership here through Dean Jeff Brown has been very supportive of our program. Giving $10,000 to teams and half a million in resources and access to billionaires and big investors is risky.

One more group would be the community. The way we’re able to teach is we go out and find investors, venture capitalists, nonprofit leaders. Our community invested over 100 hours of workshops last year. Without them, we wouldn’t be able to teach much. It’s a collective win.

Editor’s Note: This interview has been lightly edited for length and clarity.