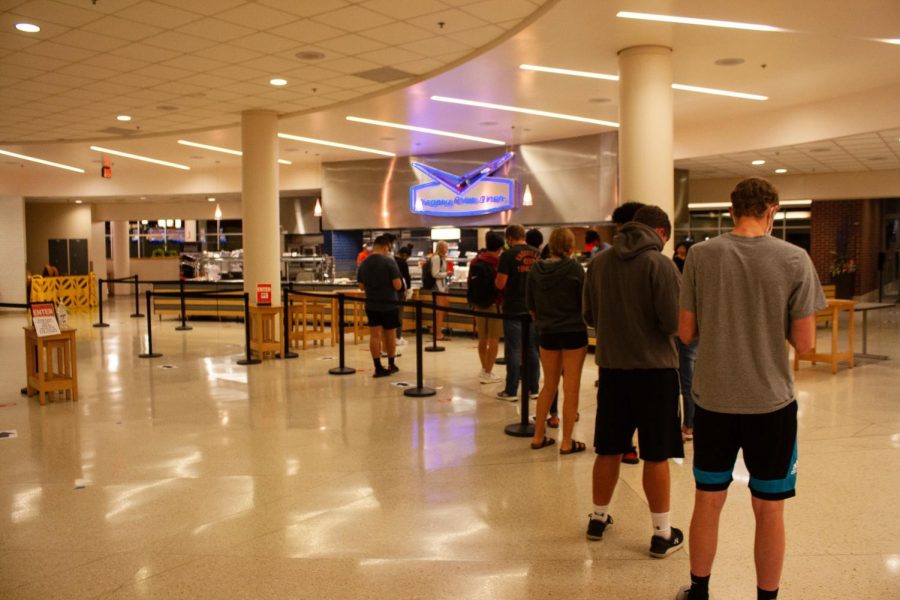 Students stand in line at the Ikenberry Dining Hall on Tuesday evening. Some quarantined students have had difficulty receiving food from University Housing.

The University of Illinois’ COVID-19 testing policy has gained national attention as students across the country returned to their college campuses. Due to hiking infection rates, many colleges have since sent their students back home and shifted back to an entirely online curriculum — but not Illinois. Despite over 800 University students quarantining by early September and over 2,000 cases by mid-September, the University has stood its ground.

The University has remained optimistic about staying open this semester, even after the two week lockdown Chancellor Robert Jones imposed on the student body only two weeks into the new school year. With frequent testing, use of the Safer Illinois app and enforced quarantining, it seems as though the University has it all together.

However, holes in testing protocol and the Safer Illinois application have been revealed. Incidents of students attempting to test out of their positive test result or using a screen recording of the Safer Illinois app showing a negative test result instead of showing their actual status have come out. Holes within the University quarantine facilities have also come to light.

Illini Media received an anonymous tip from a concerned parent stating that their child was in one of the University quarantine and isolation facilities and had not received food for a day. While The Daily Illini was unable to trace down this specific student, two other students who were comfortable being interviewed also experienced inconsistency in food delivery.

Rahil Sadruddin, freshman in AHS, was quarantined in Bousfield Hall earlier this semester. Sadruddin said he was not completely sure how he contracted the virus, but believes he was infected before he came to the University and found out he had it when his first test result of the semester came back positive. Within 30 minutes of receiving his positive test result, Sadruddin got a call from the housing department stating he would have to stay in isolation.

“They give you your lunch and dinner at 10 a.m. every day, so that first day, I didn’t eat,” Sadruddin said. “I was calling them and I didn’t have any food, and I was just so hungry.”

The University quarantine facilities also give quarantine and isolation residents a snack box as soon as people move in, according to Sadruddin.

“I didn’t get that until the second or third day, and they didn’t give me water until the third day,” he said. “I was drinking tap water from the sink.”

Sadruddin stated he also knew people from his high school community who were also quarantined in the same facility as him who had experienced similar situations.

Sadruddin and his friends weren’t the only ones who tolerated instances like this. Jonah Blazek, sophomore in Art + Design, is quarantining in Hopkins Hall and has also experienced inconsistencies with the meal plan provided to the residents in quarantine or isolation. He was exposed to the virus when a friend requested he drive them to the hospital from their isolation room on campus. The next day, Blazek was notified he had to be quarantined for 14 days.

“I noticed that for a couple days, I wasn’t receiving what I had picked on the survey,” Blazek said, referencing the meal plan survey students in isolation and quarantine receive. “I’m not a picky person, so I just ate it.”

While some aren’t receiving food regularly, others have food that has been sitting outside their dorms for extended periods of time.

“I noticed there’s a couple of doors that have two, three, four days worth of food outside, and it’s just sitting there,” Blazek said.

Blazek also noted that the area around him was not well-kept; cockroaches and crickets — dead and alive — showed up in his dorm, in the halls and in the bathrooms.

The University has stated it will provide “Daily meals, taking into consideration dietary needs and restrictions.” However, it seems as though there may still be holes in its system.