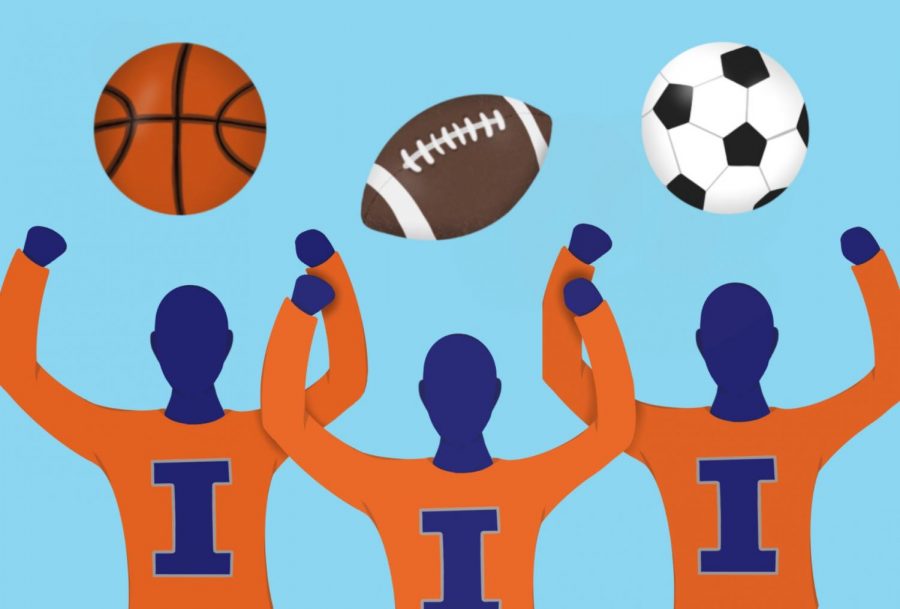 With the rise of the COVID-19 pandemic, people have been spending a great deal of their time online. This has led to an increased importance of online communities for many people. After a few months of lockdown, Mike Cagley, an Illini super fan, grew tired of the constant discussions of politics and found he couldn’t escape it. He couldn’t find the perfect community, one that was passionate and immersed in Illini sports, and he wanted to build a place to bring this community together.

Sharing this goal were four other Illini super fans who would join Cagley in the building of Illini Guys, a refuge built so that Illini fans can focus solely on their sports teams.

“We are Illini fans who built this for Illini fans,” stressed co-owner Larry Smith, the resident media professional who has worked with CNN and Turner Sports for upward of 25 years.

Not only were the founders of the site Illini fans, but the community they built is also filled with “some of the smartest Illini fans you’ll run into,” said co-owner Cagley. People around campus might not recognize Red Grange, but they will on Illini Guys, he added.

Their timing in opening the site was perfect as many are hopeful Illinois sports is emerging into another golden age with a nationally ranked basketball team under coach Brad Underwood and a growing football team sparked with hope under new head coach Bret Bielema.

“We really feel like we’re at a point where the Illini sports fan may see (great) results on the field because of these great coaches, but we want to have a place where not only can they enjoy the game, but everything that is going around it as well,” Cagley said.

The Illini Guys are coming through with that promise, offering a myriad of content revolving around Illini sports: podcasts, bracketology, rankings, pre- and post-game analysis and an active message board. One does not need to be a close fan of sports to enjoy some of the feature articles written for the site.

It is no wonder that they had such a successful launch in January with the nearly 80 different pieces of content that they published within the first two weeks after their first day up. One of the biggest reasons that they were able to put out so much quality content right away was because they had been working on this for awhile.

Not only were they working the few months between the inception of the idea to its launch, but they’ve been Illini sports fans and professionals for most of their lives.

Brad Sturdy for example, has been covering the Illini basketball team for well over a decade, one of the integral “guys” of the Illini Guys. Cagley first described Sturdy as an “Illini Sports Encyclopedia,” knowing not only all of the facts and stats about the Illini, but also having insight on the personalities tied into Illinois sports since he has been around the scene for so long. Now, he is bringing that insight to the Illini Guys’ website.

Overall, the site is a destination where fans can unplug from everything besides the Illini, and that has just as much to do with the community inhabiting the site as it does with the site itself.

“When you get a lot of fans who are really passionate, who really enjoy their team and get behind it, who are really immersed in that experience, it is really fun to be a part of that group,” Cagley said.

Cagley would also stress how much their fans add to their website. He said he understands that they care just as much about the site and community as they do, so he makes sure to pay close attention to all of the feedback that the Illini Guys receive. Everyone is all working towards one goal, and that is to create the perfect destination for the Illini fan — the one place where you can go to get as much quality information about the Illinois sports as possible.

One of the biggest influences for Cagley was that he always wanted to know the “why’s” like why did that player get taken out of the game, or why did this player get benched? Now, he along with the other Illini Guys have created a site where others who share that curiosity can hopefully get the answers to some of those “why’s,” and at the very least join in a community with a shared passion.

“People are in this to have a good time, you know; sports are supposed to be fun, so we wanted to set up a situation where people can enjoy Illini sports,” Cagley said.