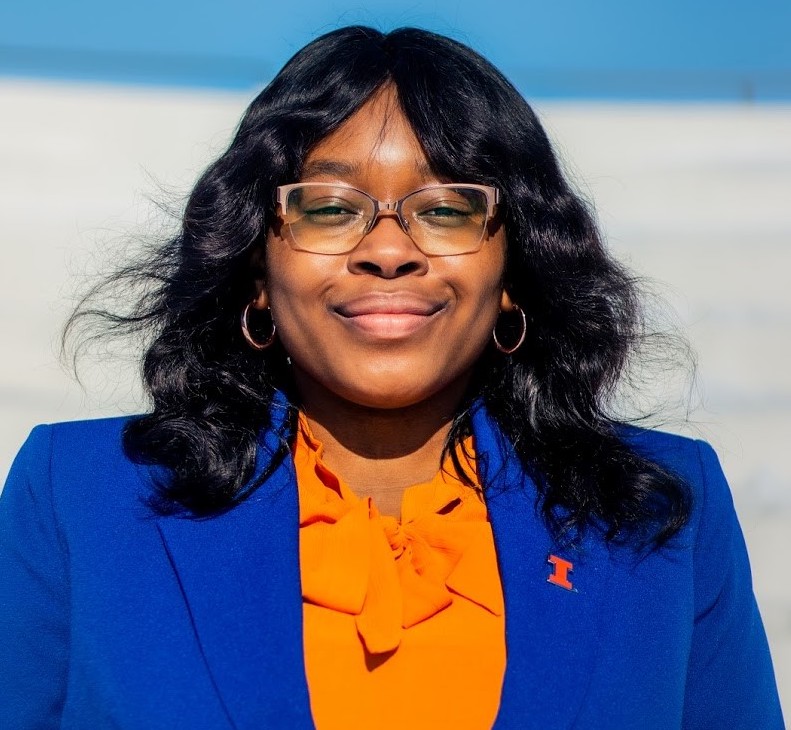 Enoma Egiebor, sophomore in LAS, poses for a photo at the Krannert Center for the Performing Arts. Egiebor and her running mate Nicole Arnold are the first all-female and all-female-of-color duo to be elected Illinois Student Government president and vice president.

A daughter of Nigerian immigrants sat in the middle of a circle of her classmates in her second-grade classroom.
Small hands stroked her hair, which was in braids at the time.
As the only Black student at an entirely white school in the suburbs of Chicago, for most of her life, Enoma Egiebor, now a sophomore in LAS, said she often felt like she had to represent the Black community.
“It’s so tiring sometimes having to be like, ‘Oh, I have to be perfect because I’m the only one that looks like me here and if I mess up people will look at all Black people in a bad way,’” Egiebor said.
Egiebor and her running mate, Nicole Arnold, sophomore in LAS, were recently elected Illinois Student Government president and vice president with 55% of the vote.
They’ve now made ISG history as the first all-female and all-female-of-color ticket to win.
However, their victory wasn’t met with the traditional celebration because of the pandemic. Instead, Egiebor and Arnold said they instead found themselves screaming to each other on FaceTime.
“It was a big moment for us and there was a lot of emotion,” Egiebor said. “After all of these odds against us, we still managed to win.”
The odds Egiebor referred to were the fact that they are both women of color in the midst of heightened racial prejudice.
Egiebor said representing so many identities during this hot-blooded time was a huge worry throughout the campaign. But after seeing they had won, she said she was relieved.
“People have a lot of discriminatory thoughts so I thought that may play a factor,” Egiebor said. “But we ended up winning so I just felt relief.”
Sophia Jandry, freshman in LAS and ISG senator, campaigned for Egiebor and Arnold’s campaign throughout March. As a Muslim woman, Jandry said she got involved with ISG because of the racial disparities she saw on campus.
“I realized that a lot of the time minorities and people of color aren’t treated with respect or given as many resources as they are promised,” Jandry said.
Running on a platform built on diversity, equity and inclusion, Egiebor and Arnold said they have plans to improve the experience of students of color at the University.
As a woman of color, Jandry said she believes that the representation of women of color in office shows that they will focus on the needs of students of color.
“These women come from a place of understanding and represent some of our most marginalized groups on campus including Black, Asian and LGBTQ+ students,” Jandry said. “This is why I believe they will fight harder for marginalized communities and advocate more on behalf of them.”
Preparing to take office April 21, vice president-elect Arnold said she thinks the biggest challenge will be proving to ISG that they are established leaders, that are also women.
“We need to be able to prove ourselves,” Arnold said. “And that’s not something that men usually have to think about.”
While Egiebor was one of the only people of color at predominantly white institutions growing up, Arnold said her experience was the opposite. Arnold, a queer woman of color, grew up in a diverse community where it was rare for people to attend a school like the University.
Arnold said the reason she and other students from her high school were able to attend the University was the announcement of the Illinois commitment which guarantees free tuition for in-state students with family incomes under $67,100.
To her, initiatives like that are an important step in allowing more students of color to have the opportunity to come to the University.
“I want to see more people like me here,” Arnold said. “I want this to be a place where more people who are people of color can feel comfortable coming here and have the opportunity.”
Although several all-female candidates have run for student body president and vice president within the last few years, they were never elected.
Now the first, Arnold, in tears, said she’s not sure why the student body chose them. However, she said their victory proves that progress is being made for students of color to find leadership opportunities on campus.
“It shows a lot about our progress as an institution,” Arnold said. “Maybe freshmen will come and see us in office and know that they can succeed.”