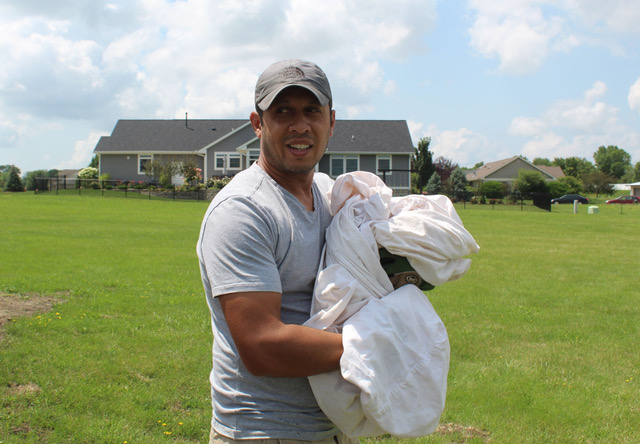 Sean Williams, Champaign resident, carries a goose wrapped in a sheet at Beringer Commons on July 18. Friends of Geese, a Champaign-Urbana-based animal rights activist group, protects and saves these birds from deliberate killings in the area.

A man wearing football cleats and gardening gloves stood holding a goose inside a gathered sheet at Beringer Commons on Sunday, July 18.

Sean Williams, Champaign resident, captured the goose after responding to a call from Friends of Geese, a Champaign-Urbana-based animal rights activist group. They said the goose was deliberately hit by an unmarked car.

Although Williams is not a member, his love for animals motivated him to bring the goose to the Wildlife Medical Clinic at the University of Illinois for rehabilitation.

“I love animals,” Williams said. “I just feel bad for them.”

Since the summer of 2020, Friends of Geese members have decorated themselves in feathers and goose hats, carrying signs urging cars to “honk to stop killing geese” in protest of the over 100 geese that were killed at Crystal Lake Park.

The killings were approved by the Urbana Park District. After Friends of Geese members and community members protested and created a petition that amassed over 11,000 signatures, the Park District pressed on with the killings.

“This was not an action we took lightly and was only performed after many years of increasingly intensive management efforts to limit the impacts of geese on the park,” the Urbana Park District wrote on their website. “The harvest reduced the population from over 180 to 35 birds, and numbers continue to fluctuate today.”

Friends of Geese have led presentations attempting to bring awareness to alternatives to killing geese. They’ve also submitted numerous Freedom of Information Act requests, to expose and pound city officials who have signed off on geese-killing operations.

The Illinois Department of Natural Resources responded to questions by email saying that the department tries to find non-lethal management strategies before deciding to cull geese.

The motivation behind this activism for most members of Friends of Geese is their deep love for the gray birds. For member Susan Parenti, who received her masters and doctorate from the University, activism is her whole life. She said she really feels as if she has relationships with them.

“I know the geese,” Parenti said. “I have names for them.”

Penny Hanny, a member of Friends of Geese, said that the more a person protests, the more they are able to understand a goose’s point of view.

“I think it transforms the person who does it themselves,” Hanna said. “You become much more able to understand someone else’s point of view — in this case, it’s understanding the geese.”

While many don’t consider the point of view of the geese, Hanna said it’s important.

Micheal Ward, professor at the University of Illinois and goose expert, said that scientific research proves that geese have emotions.

“It’s probably not the same (as human emotions), but they have responses,” Ward said.

For example, many argue that geese are an invasive species that are overpopulated. However, Ward said that while geese are becoming overpopulated in urban areas, the species isn’t necessarily invasive.

“(Geese) populations have greatly increased in urban areas,” Ward said. “And when they get out of control where the population is very large, it can cause a whole litany of problems.”

“Geese have to be the number one nuisance bird in Illinois by a lot. But that doesn’t mean they’re invasive — they’re just taking advantage of what we provide for them.”

And what do we provide for them? Lakes, ponds and streams that build homes for geese.

Ryan Askren, a graduate student who studies geese under Ward, said that geese haven’t started flocking to urban areas for no reason. Askren said much of their natural habitat has been eradicated.

“We’ve really just destroyed all the habitat that they historically would have had in Illinois,” Askren said. “These urban areas provide relief from natural predators and hunting pressure.”

Often, Askren said geese are looking for bodies of water surrounded by low grass to look out for predators.

Many of these bodies of water, including the ones at Beringer Commons and Crystal Lake Park, are designed to look appealing to geese. Parenti said this makes their killings even more inhumane.

“It’s as if you’ve invited people to your house, and then you kill them because they came,” Parenti said.

This is an ongoing worry for Friends of Geese.

Crystal Lake Park is “getting a facelift” and renovating many of its facilities. They’re building new amenities such as an aquatic center and sand volleyball courts.

Friends of Geese members said measures to protect the geese should be a prioritized renovation.