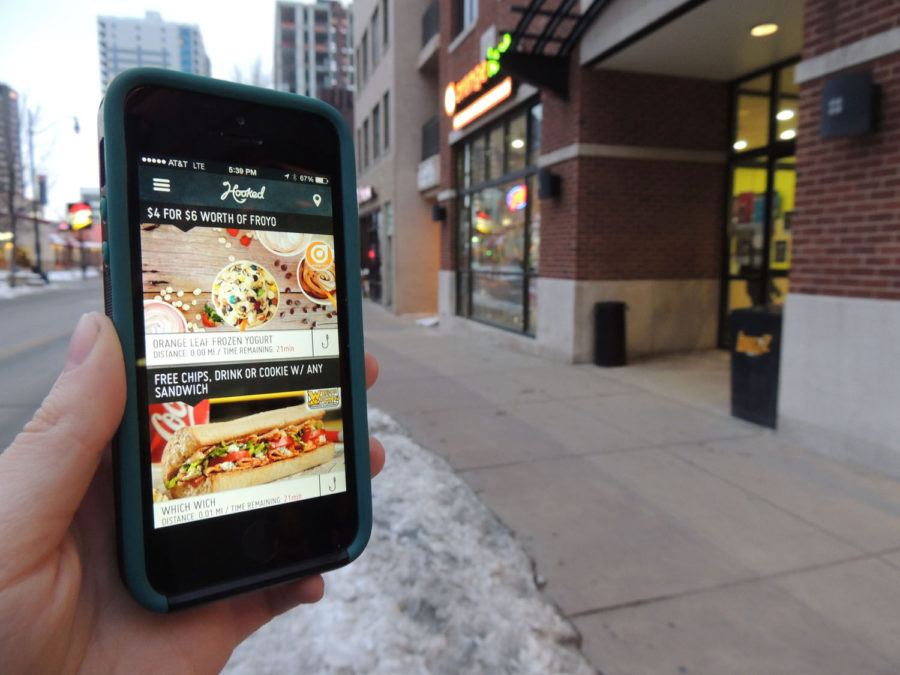 Orange Leaf, a frozen yogurt shop, was one of the original 32 restaurants working with the Hooked app when it launched.

From 4 to 7 p.m. Tuesday night, customers moved in and out of the Silver Mine Subs on Daniel Street during the dinnertime rush. But only some were picking up the typically $4.29 small subs for $1 each — and the difference was in the customers’ smartphones.

New to Champaign-Urbana since Jan. 18, Hooked is an expanding food and beverage discount app offering real-time specials from popular restaurants within walking distance of the University campus. By creating a newsfeed of the nearest time-limited deals, users are able to scroll through brightly colored images of the closest food offerings from their specific location. Anyone on campus can download the app for free.

“Hooked is a way to help your meal decisions become easier,” said Tim Rothwell, co-founder and CEO of the app. “It really allows you to check out new restaurants around your university community and save money along the way.”

The app first launched in C-U with 32 partnered restaurants and food trucks, and now has expanded to 40 with plans to add more. Over 5,000 users now check the app frequently, according to Rothwell.

Tuesday’s extended special at Silver Mine Subs was just one of the events promoted by Hooked and its four student ambassadors on campus. Allie Goldstein, student ambassador and junior in FAA, helped run the event and market it through promotional posts on her Facebook account. Since being hired as an ambassador over winter break, she’s helped promote many of Hooked’s free food events through flyer and social media posts, especially during the first two weeks of the semester, she said.

Goldstein first heard of the app herself through word-of-mouth from students at the University of Wisconsin—Madison, one of the five campuses the app is currently on. The other three include University of Texas—Austin, University of Michigan and Michigan State University.

Dimitra Mourikes, sophomore in LAS, downloaded the app after participating in Hooked’s free food event weeks at the beginning of the semester. She said it’s already introduced her to new restaurants on campus, such as Orange Leaf and The Cookie Jar. She admitted she doesn’t check the app every day because of her dining hall meal plan, but she recommends the app, especially to those living outside the residence halls.

“It’s something I’ll definitely use more of next year when I’m living in an apartment,” she said.

One of the app’s appealing aspects is its focus on discounts students want. Hooked makes it a priority to work with its partners on keeping the deals engaging, fresh and relevant to students, Rothwell said.

Orange Leaf, located on Green Street, was one of the original 32 restaurants working with Hooked when it launched. Its manager, Sonya Brock, said the location has had fabulous results with the app as it has brought an increase in new business.

“(Hooked) is very on top of things,” Brock said. “If I ever need something changed on the app — if I wanted a different promotion or anything like that — it’s done within 24 hours. … I’m really impressed.”

The app was first launched in January 2012 by co-founders and childhood friends Rothwell and Brett Berman, also COO of Hooked.

“Local businesses, up to this point, have a pretty limited in terms of marketing solutions that are available to them that can effectively connect their business to customers in the local community,” Rothwell said. “Social media platforms, loyalty programs, print coupon books, daily deal websites — they’re just not cutting it. They’re not doing an effective job, which is why we’ve built this mobile-focused marketing channel.”

Over its first year, Hooked developed strategies focused on university-based audiences to reach the millennial, mobile-focused markets. The Hooked team is already planning to take the app national for the upcoming fall 2015 semester with the introduction of new college locations. However, Rothwell said the app doesn’t plan to limit itself to just college campuses in the future, although that’s where it got its start.

“If you have the right product, it can go viral very quickly amongst a tight-knit community,” Rothwell said.