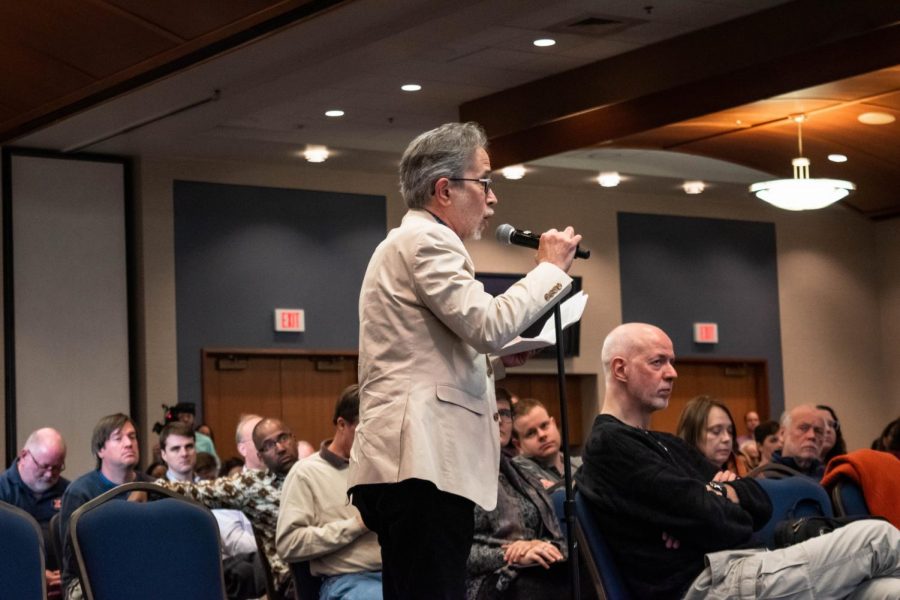 Bruce Rosenstock, professor in LAS, speaks at the annual faculty meeting in the Alice Campbell Alumni Center on Oct. 14. The University does not have a plan for anti-Semitism training.

“There is no plan. It doesn’t exist,” said Bruce Rosenstock, professor in LAS. “It’s simply words that were used to respond to what was raised as the most serious infraction of anti-Semitism on our campus. Words are one thing. There is no action being projected, nor should there be.”

Rosenstock said the program should be broadened and redesigned as training for prejudice in general, focusing on how the University sensitizes themselves to what discrimination looks like. However, no training should begin until an official policy statement is implemented to address action.

The campus will be conducting an “external review” of the University Housing multicultural programs to identify and implement the best possible practices.

As a professor of religion, Rosenstock formally requested to be involved in the training.

“(I) thought it would be important for a knowledgable faculty member on the history of the complexities of anti-Semitism to be involved,” he said.

After Chancellor Robert Jones accepted, the two then discussed the issues which may result from such a hotly debated topic.

“It’s a question of to what extent a critique of Israel can be properly done,” Rosenstock said. “Every state in the world can commit crimes and acts that we speak about.”

He added introducing a definition of anti-Semitism on campus would make it impossible to hold open debate, due to the censorship of ideas and viewpoints.

“At the heart of the debate on campus is, ‘Where do we cross the line?’” Rosenstock said. “The threat to us on this campus comes from those who put swastikas in bathroom stalls or who write, ‘I hate the ‘N-word.’”

For universities all over the world, introducing a definition of anti-Semitism could threaten academic freedom and the freedom of speech.

“If we were to refrain from speech and activities where any student feels uncomfortable … we would simply turn off the lights at this University,” Rosenstock said.

Even though the methods of action have not been decided, training for University Housing staff will be implemented by the end of the semester, said Chantelle Thompson, director of marketing and communications for Student Affairs.

“The University of Illinois is not unique in that higher education institutions and communities across the country are all facing issues such as this on a regular basis,” Thompson said.