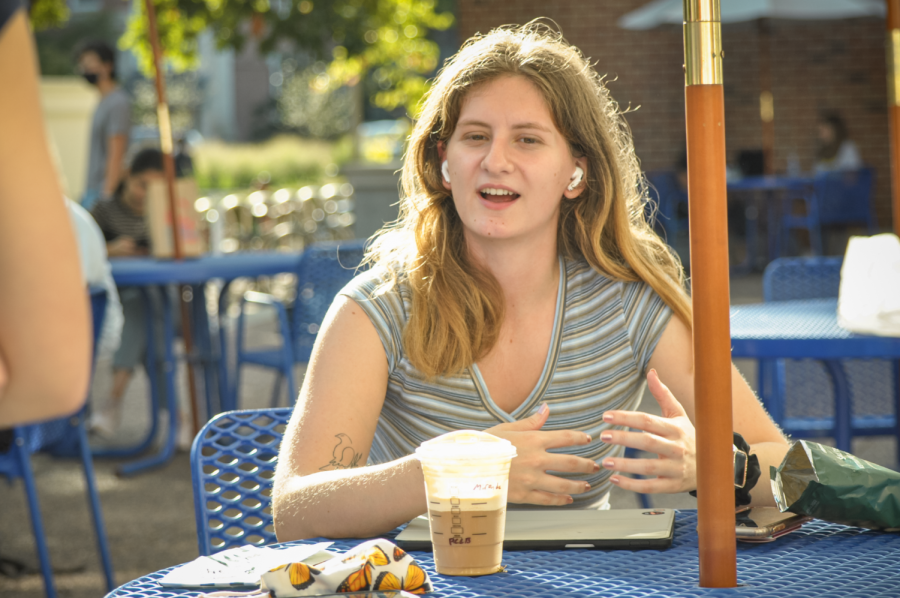 Miranda Stillwell, sophomore in LAS, shares her opinion on protesting policies the University has put in place. The deadline for the public to comment has been extended due to feedback from students.

The University plans to adopt a policy regulating on-campus speech and expression. The policy consolidates existing regulations and creates new restrictions regarding expressive activity and has received significant pushback from students.

The new regulations in the policy, entitled Expressive Activity on Campus, include a section giving the University the power to restrict usage of the area surrounding Alma Mater and a section stating students must get approval before using amplified sound devices during expressive activities. The policy would require restrictions of the area surrounding Alma Mater to be approved by Chancellor Robert Jones and posted to the Office of the Registrar’s website.

The section stipulating that the University could restrict usage of the area around Alma Mater has received attention from students who believe this section of the policy constitutes overreach.

“Alma Mater is a symbol, (it’s a) very easily recognizable well known symbol of the University,” said Dat Luu, junior in LAS and co-chair of the UIUC chapter of the Young Democratic Socialists of America. “The fact that our administration wants to restrict protest and visibility for these protests at well known symbols like the Alma Mater, is, in my opinion, an attempt to reduce the outrage of activists and people who care enough about something where they want to protest.”

An emblematic symbol of the University, Alma Mater has often served as the beginning or end point for community protests. On Oct. 6, protestors with the CU Women’s March gathered at Alma Mater to begin their rally. Other recent significant protests and rallies at Alma Mater include the Students for Environmental Concerns’ Climate Strike, as well as Students for Justice in Palestine’s rally in solidarity with the people of Sheik Jarrah.

“The proposed policy includes reasonable and legally permissible parameters on the time, place and manner of expressive activities,” said Robin Kaler, University spokeswoman, in an emailed statement. “We are not increasing limitations on expression. Instead, we are consolidating and clarifying existing policies, and making sure that students can safely exercise their First Amendment rights without depriving others of participation in university activities.”

Other sections of the policy consolidate information on where students can post and distribute written or printed materials, clarifies that chalking with water-soluble chalk will be permitted on University sidewalks, but not on any other University property and asserts that campus community members and visitors are allowed to distribute written materials inside common-areas of publicly-accessible buildings while open to the public. Areas prohibited in this section include computer labs, classrooms, auditoriums, retail shops and dining halls.

Another section of the policy under scrutiny by the student body is the section that, if passed, will ban “amplified sound,” unless approved by the Reservation of University Property Policy or Chancellor’s Special Event Advisory Committee. The policy states that students “must moderate noise so as not to materially and substantially disrupt, impair or interfere with teaching, study, research or administration of the University.”

Leadership from ISG, including Student Body President Enoma Egiebor, Student Body Vice President Nicole Arnold, and Speaker of the Senate Ari Kelo, met with the authors of the policy on Oct. 8 to express their discontent with the policy. President Egiebor, junior in AHS, believes that the policy is not in the best interest of the student body.

“My official stance is that this policy should be scrapped and thrown out because it doesn’t serve the interest of the students well,” Egiebor said. “With all these student concerns and students expressing how bad the policy is, the University should just get rid of it. We talked to the office and told them to get rid of it, and they didn’t really listen to us, so we’ll see what happens.”

The policy was initially uploaded to the Campus Administrative Manual’s website on July 15 to little fanfare. However, a post made to the UIUC subreddit, as well as an infographic posted to instagram by Kelo, senior in FAA and LAS, have recently driven student attention toward the policy.

“We had to get the word out to students,” Kelo said. “The way things get passed without concern for the student voice is that there’s a feedback period, but no sort of announcement about it, so it goes under everyone’s radar. It’s because of that they’re able to pass things like this without anyone finding out.”

After reading through the policy and discussing it with the leadership of ISG, Kelo designed the infographic on canva and posted it on their instagram page. The graphic has received over 1,000 likes as of Wednesday.

“Protest on a college campus is one of the most fundamental traditions of American culture since the Civil Rights movement,” Kelo said. “This is a pivotal moment in American history where we need people to speak out and say what they want and protest for what they want, but this is just making it so much harder for students to feel safe when they do that. It’s really suppressing the student voice, whether it’s intentional or not.”

During a Senate Executive Committee meeting on Monday, Vice Chancellor for Academic Affairs and Provost Andreas Cangellaris claimed that the Reddit post may have miscommunicated information about the policy.

“To the best of my knowledge, some of the concerns that were expressed were prompted by a Reddit post that misrepresented, or perhaps presented confusing information about this draft policy,” Cangellaris said during the public meeting.

In response, Jones asserted that the policy will not be used to restrict student expression.

“I think part of the concern that I’ve heard says (the policy) is supposed to limit free expression in some way, and it’s just the opposite,” Jones said during the SEC meeting. “That’s antithetical to the whole purpose of this, (which is) to make sure free expression can occur in a very safe environment that aligns with University values about free speech. It’s all about promoting free expression in ways that are congruent with our policies and practices at this University.”

While the University asserts that the policy won’t be used to stifle student speech, some students fear this policy could suppress protest. Although policies are currently in place stating that protests cannot obstruct pedestrian traffic nor disrupt classes, the University’s affirmation of their stance and their clarification of the language regarding disruption has drawn criticism from students.

“It feels like the University doesn’t want protests to be disruptive in general, because being disruptful is how protests make an impact,” said Niko Johnson-Fuller, sophomore in LAS and co-chair of the UIUC chapter of the Young Democratic Socialists of America. “It seems as if they’re taking action to try and make protest as powerless as possible, because if they’re powerful, they’re actually going to challenge the interests of the administration.”

One of the main student concerns about the policy regards the ambiguity with which certain sections are written, and fears over discrepancies regarding which groups the policies could be applied to.

“My biggest issue with this policy is that it allows so much room for people of color and other minority students to be discriminated against,” Egiebor said. “We’re the ones who are out here on the frontlines protesting the most since we have the most to lose unfortunately. It really creates that opportunity for that.”

There is no set date on which the University plans to officially adopt the policy. The public comment deadline for the policy has been extended to Nov. 12 due to feedback from students.