‘Meeting with the Chief’ results in alleged vandalism, assault and police involvement 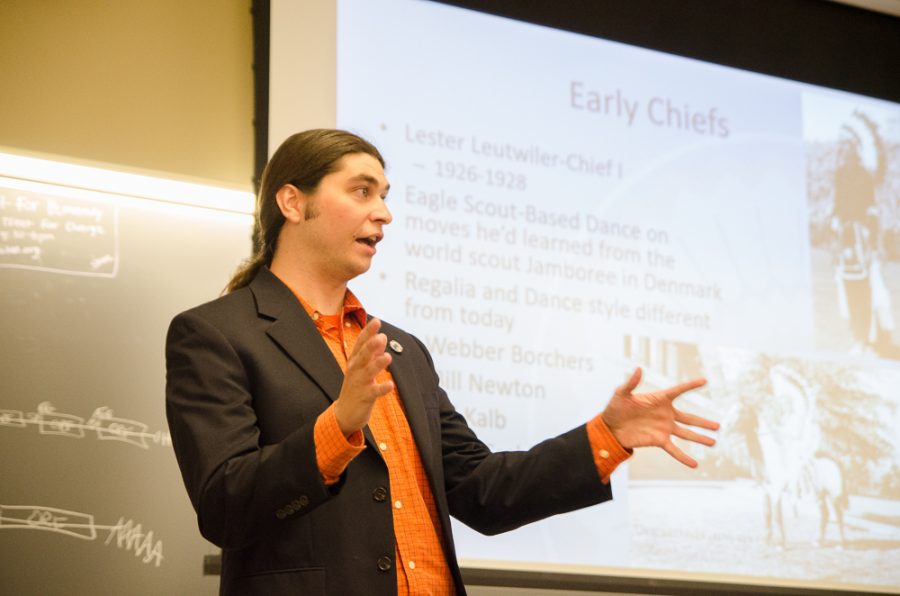 Ivan Dozier, the unofficial Chief Illiniwek from 2010-2015, spoke at this week’s meeting of the Illini Republicans on Thursday Oct. 26, in Lincoln Hall. Dozier informed those in attendance on the general history of the Chief, how it was started, how it was carried out, and why it was retired.

A routine Illini Republicans meeting was disrupted when a University employee was escorted out by the University of Illinois Police Department after vandalizing multiple posters.

The meeting featured a presentation by Ivan Dozier, the unofficial Chief Illiniwek from the years 2010 to 2015. Dozier received his undergraduate and graduate degrees from the College of ACES in 2013 and 2015. He is a board member of the Honor the Chief Society.

The employee was identified as Angela King, a member of the Facilities & Services department at the University. King entered the room 15 minutes into the meeting, recorded the presentation, then walked to the front of the room and began ripping posters belonging to the Illini Republicans, Dozier and the Honor the Chief Society. The Daily Illini did not reach out to King for comment.

Breelyn Mehrtens, philanthropy chair of the Honor the Chief Society, attempted to restrain King, which led to an altercation between the two in which Mehrtens grabbed King by the waist, arm and clothing. King accused Mehrtens of assault. UIPD entered the premises and escorted King and Mehrtens out of the classroom for questioning. Neither were arrested at the scene.

“I’m amazed that anyone would go out in public and embarrass themselves like that,” Jack Johnson, sophomore in Engineering and vice president of the Illini Republicans, said. “It was disrespectful to come in and freak everybody out without warning.”

Among the ripped posters was one of Dozier’s face.

“I got beheaded,” Dozier said. “Imagine if someone dressed a pinata of you and smashed its head off — that just happened.”

Dozier also said that this incident was the definition of an unsafe campus.

Jon Heideman, senior in LAS and president of the Illini Republicans, said he will be pressing vandalism charges on King on behalf of the organization. No charges have been filed as of Monday.

“That was insane. I wasn’t really expecting that,” Amelia Peterson, graduate student in Information Sciences, said. ”I didn’t think that this event would be at that level of provocation.”

Dozier also received death threats before coming to the meeting.

“It’s not new. When I first got chosen as the Chief, a few of those were coming in. Sadly, it’s not surprising, but I will say that the hostility has definitely risen this year,” Dozier said.

Dozier’s presentation was meant to be educational, he said, and to give background to students about the long-running controversy surrounding Chief Illiniwek, the University’s former mascot.

Following a 2007 NCAA ruling, the University banned the Chief. The ruling required universities to get permission from surviving descendants of officially recognized Native American tribes before using their likeness as an official mascot or symbol.

The closest descendants of the Illinois tribes on which the Chief is based, the Peoria Tribe of Oklahoma, did not give the University permission to continue using the Chief’s Illiniwek, but later in 2010 said that if they were approached to discuss the matter, they would be willing to reconsider. The University has not done so in the past seven years.

The issue of the retirement of the Chief has sparked intense controversy in the years since it was banned. In September, the University also retired the Fighting Illini war chant. The Illinois Student Government will also be boycotting the homecoming parade in protest over the Chief.

Dozier covered the history of the tribes collectively known as the Illini, the history of the Chief as the University’s official mascot and later as the unofficial symbol, and an overview of the controversy and polarity caused by the issue. He then left open for questions and comments.

“I really didn’t have an opinion on it before I came here, but from what I’ve heard I’d say that the Chief doesn’t seem as offensive as many of the other portrayals of Native Americans in athletics,” Peterson said.

Joe Bateman, senior in LAS, said that though Dozer is pro-Chief, he made it a point to talk about things he doesn’t believe in. “He doesn’t dive in 100 percent and say that everything about Chief Illiniwek is perfect, because it’s not. It was a very fair discussion, and it was good that he let the opposition have their chance to talk.”

Bateman said that he has been told the Chief is racist, but that those people are not Native American, so their opinions don’t count for as much.

“It’s nice to hear from a Native American about what their thoughts are. Although I have an opinion, I don’t think it counts for much, because I’m not Native American,” he said.

Mehrtens is a Native American of Shawnee and Cherokee origin and said she was unsure on some people’s offense in using the Chief’s likeness.

“I understand racism because it was within my own immediate family,” Mehrtens said. “I have grown up understanding what racism really is, so when these students say they’re offended by this, I don’t understand why. I’m yet to run into a Native American who embraces their culture.”

Dozier said that the intense resistance from protesters and the violence he has witnessed has motivated him to speak out more strongly about the Chief.

Correction: A previous version of this article stated that charges of vandalism would be charged. No charges were filed, and the headline and text have been changed to reflect this. Clarification about the interaction between King and Mehrtens and lack of outreach to King have also been added. The Daily Illini regrets the error.