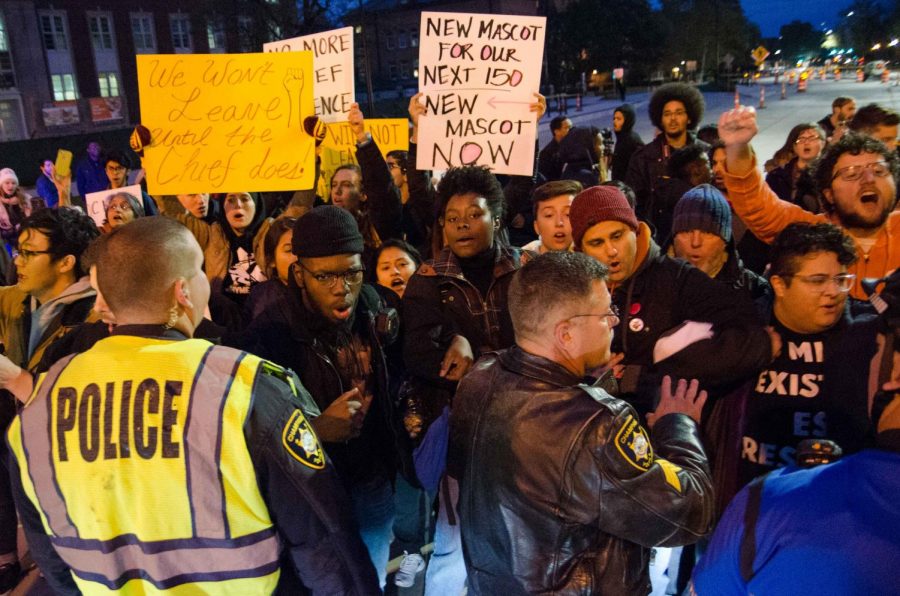 Anti-Chief Illiniwek protesters faced University police officers on the corner of Wright and Green streets after forming a blockade. The protest was organized by the Illinois Student Government and included other student organizations.

Last night, the Illinois Student Government called for the University to move forward with creating a new mascot.

ISG was flooded with almost two hours of public comment about the organization’s actions regarding the mascot and the Homecoming Parade protests.

“This resolution reaffirms our stance that the University should move forward with a new mascot,” Raju said. “It’s not about moving back, it’s about moving forward.”

Tariq Khan, Ph.D. candidate in the Department of History, thanked ISG during public comment for standing up against the use of Chief Illiniwek and backing up their words with actions.

“Some of these pro-Chief people were getting very ugly, vulgar and in some cases even violent,” Khan said. “In the face of their ugliness, President (Raneem) Shamseldin remained dignified and did not allow these pro-Chief bullies to silence her and her righteous message.”

Khan said the Chief tradition came out of a climate of racism and from the imagination of a white bandleader in the 1920s.

Madeleine Hubbard, sophomore in Media and former Illini Media Company employee, said during public comment that the ISG violated Illinois law when it created its own parade without a permit after stopping the Homecoming Parade with its protesting.

“ISG can not and should not silence others simply because they do not agree with their beliefs,” Hubbard said.

Senator Sully Peterson-Quinn, senior in FAA, said there were 16 student organizations that helped put the protest together.

“When we all stand together as a student body we can really make a difference,” Peterson-Quinn said.

Student Body President Raneem Shamseldin, senior in LAS, said that what was meant to be a walkalong protest may have turned a little more “spontaneous.” She said she is glad everyone was safe.

Joey Domanski, vice president of ISG and senior in LAS, thanked everyone for coming to public comment and said, “It is important for a representative government to hear both sides of the issue.”

Raju said he does not want to rehash the discussion of whether this University is ready for a new mascot. He said the committee that was created two years ago came to that conclusion.

ISG voted to send the resolution to ISG’s Committee on Campus Affairs.

Andrew Minik, senior in Business, said “there are students in this student government who believe that the words on posters are more dangerous than the acts of ripping it up.”

Minik said he is worried about the future of the student government after it sponsored the event that occurred over Homecoming Weekend.

“You have absolutely disgraced this University,” Minik said. “I am absolutely afraid of the future for this student government. Less than a quarter of the student body even considers you relevant enough to vote you into office.”

“We can say what we want in the realm of not harming anyone, not slandering anyone,” Heideman said. “I hope that as senators we can move to include conservative students such as myself in that (inclusiveness) on campus.”

Ivan Dozier, University alumnus and former unofficial Chief Illiniwek, was one of the voices heard during public comment at the meeting.

“Do not say you are doing this for Native American people because it does not represent all of us,” Dozier said. “We are capable of thinking for ourselves; we are capable of learning and understanding and discussing. That is not the type of environment that we are fostering here at the University of Illinois. We are not allowing for discussion.”