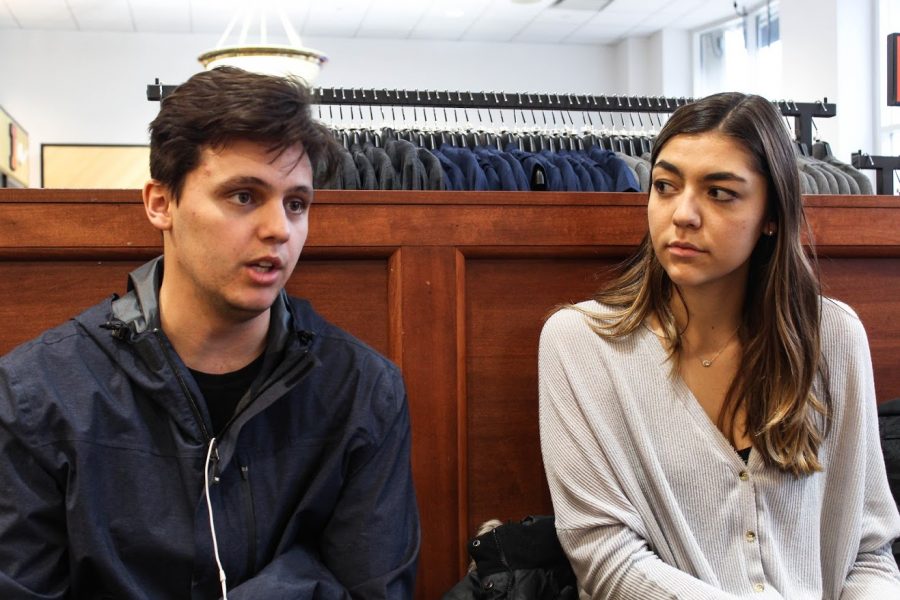 Ezra Wallon (left), junior in Engineering, and Katherine Florence (right), junior in AHS, speak about their organization Green Greeks. The aim of the organization is to help fraternities and sororities be more eco-friendly.

From red Solo cups to Styrofoam trays, waste in Greek housing is piling up, prompting students to take action. A new campus organization aims to reduce waste and promote sustainability in Greek housing.

Julia Irle, junior in LAS; Ezra Wallon, junior in Engineering; and Katherine Florence, junior in AHS, formed Green Greeks to try and change people’s thinking when it comes to sustainability.

Unlike University Housing, which has sustainability programs and people to oversee them, Greek housing has no one encouraging sustainable practices.

Co-founders Irle and Florence started to notice Greek housing’s sustainability problems when living in the house of their sorority, Kappa Alpha Theta.

Some of the major problems they noticed were heavy disposable plate and utensil use, lights being left on and high water usage.

Irle at first wanted to create a sustainability chair in her sorority, but after finding that was not possible, she and Florence started researching Greek life sustainability programs at other universities.

After consulting with other programs across the country, Irle and Florence created Green Greeks.

Green Greeks is part Registered Student Organization and part liaison to the Certified Green Chapter Program within the Institute for Sustainability, Energy and Environment.

Getting Greek housing residents to recycle is one of the organization’s main goals, Florence said.

Irle said many people living in Greek housing do not actively recycle, and many houses are not even signed up for recycling with the city. She said part of the reason people don’t recycle is they don’t know what is and is not recyclable.

Although it differs house to house, Wallon, co-vice president of Green Greeks, said many fraternities choose to use disposable plates and utensils rather than washable dishes.

Last year living in his fraternity, Wallon said he became so frustrated with the waste of his house that he bought everyone on his floor ceramic plates.

“Here, this is what you are eating on now. Use it, not Styrofoam,” Wallon recalled saying.

Wallon said unfortunately it lasted for about two weeks.

Styrofoam plates and plastic utensils don’t biodegrade, which contributes to a lot of waste in the environment. Wallon said Green Greeks wants to encourage people to use more reusable dinnerware.

Irle said party culture has been one of the biggest contributing factors to waste, not only in Greek life but on  college campuses as a whole.

“In fraternities, for the most part, there are going to be a lot of cans and cups, and without a recycling system those are just going to end up being thrown away,” Irle said.

Irle said house parties aren’t the only problem. Bars are full of plastic cups, and many do not offer reusable options. Irle said Green Greeks wants to implement some strategies to reduce this kind of waste as the organization grows.

Although the organization is currently looking at smaller actions like recycling, turning the lights off and reducing styrofoam and plastic use, Wallon said they are looking toward making some more house design implementation systems in the future.

No Greek houses have been certified yet, but Wallon said they are working on recruiting ambassadors to represent each house on campus so they can start implementing more of their plans next year.

When people become ambassadors, they enroll their chapter through the iSEE website. Then, members can start “greening” their chapter. When they feel like they have achieved all their goals, they can reach out to the Certified Green Chapter Program team to finalize certification.

Different actions unlock one of the three levels of certification for Greek chapters: bronze, silver and gold. Sororities and fraternities are encouraged to continue reaching for the highest level. Once a chapter is officially certified, it is for one calendar year.