University to use The College Board’s ‘adversity score’ for student admissions, retention 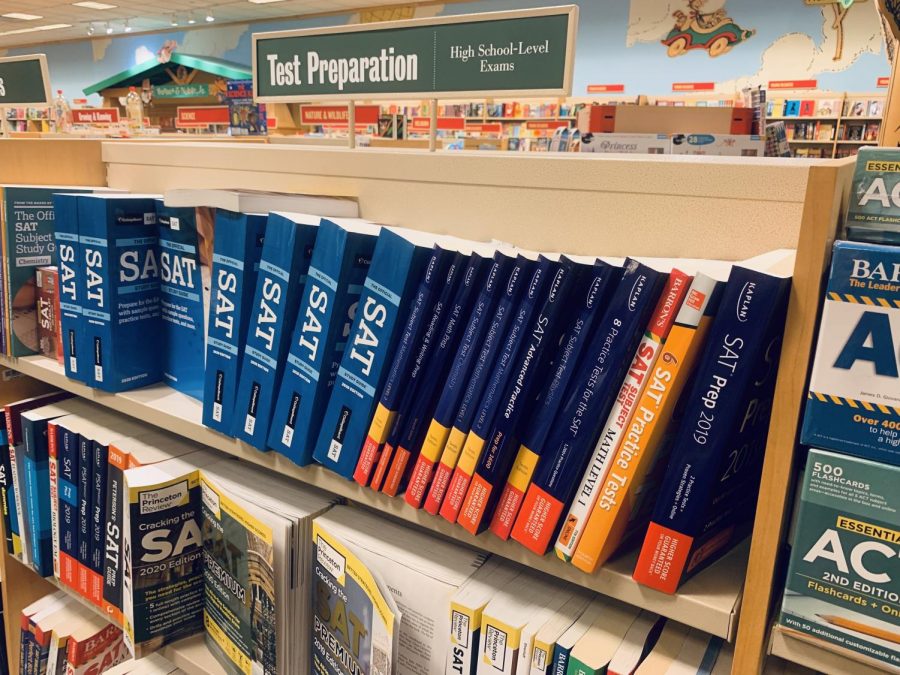 Books intended for SAT preparation sit on a shelf at Barnes & Noble on Wednesday. The College Board recently announced the Environmental Context Dashboard, a tool intended to measure social and economic adversity in college applicants’ backgrounds.

The College Board recently announced a new college admissions tool that measures the economic and social adversity of students who take the SAT exam.

The Environmental Context Dashboard is meant to help schools diversify their student populations without looking explicitly at race.

The ECD determines an “overall disadvantage level,” or score, based off contextual data of 31 factors across two categories: a student’s neighborhood and a student’s high school. These factors include family income, family structure, educational attainment, housing stability and crime.

The score can range from 1-100, with a higher score indicating greater student adversity.

College admissions officers have full discretion of whether or not to consider these scores when making admissions decisions.

Students currently don’t get to see their score, but The College Board president David Coleman recently said to WBUR the organization will reconsider sharing the scores with students and families.

The College Board piloted the ECD with over 50 colleges and universities in the past three years. This year, the organization will expand their research partnership to more institutions.

The University is still in the “analysis phase” of reviewing the ECD and has not yet actively started using it for admissions purposes, according to the Director of Undergraduate Admissions Andy Borst.

He added the University will use a component of the Dashboard to better define under-resourced high schools in the admissions process next year.

For the University’s purposes, Borst said he thinks the real potential of the information from the ECD is to better understand barriers to student success and further better design student success interventions to help address these barriers such as lack of academic preparation and financial inequities.

Borst also said the ECD will help the University better understand the environment of a student applicant, especially of those applying from out-of-state or from rural areas where admission officers may be more unfamiliar with an area.

This review process already takes into account various external influences such as school resources, habitus, socioeconomic status and family context that can contribute to or hinder a student’s accomplishments.

The College Board’s announcement of the ECD, and the idea of measuring student adversity into a single score, has also been met with some criticism.

“It’s people reacting to headlines and making assumption on how it’s being used,” Borst said. “It has not been a great rollout from The College Board in terms of how it’s been conveyed to the public, even though there’s quite a bit of research that’s gone behind the development of the product.”

While Johnson isn’t directly involved in admissions, he said he thinks having more information about a student is generally a good thing when it comes to the admissions process. But he also has some concerns.

“It definitely shows that (The College Board is) acknowledging that there are different levels of privilege and adversity that students face and that affects their experience,” Johnson said. “I have some concerns about trying to boil down all that complexity into one number.”

The University has to figure out how to protect against oversimplifying the ECD data and how to keep from creating a self-fulfilling prophecy for students from high-adversity backgrounds, Borst said.

Borst also adds a limitation of the new college admissions tool is it only applies to national students and not international students, who account for about 15% of the total undergraduate population.