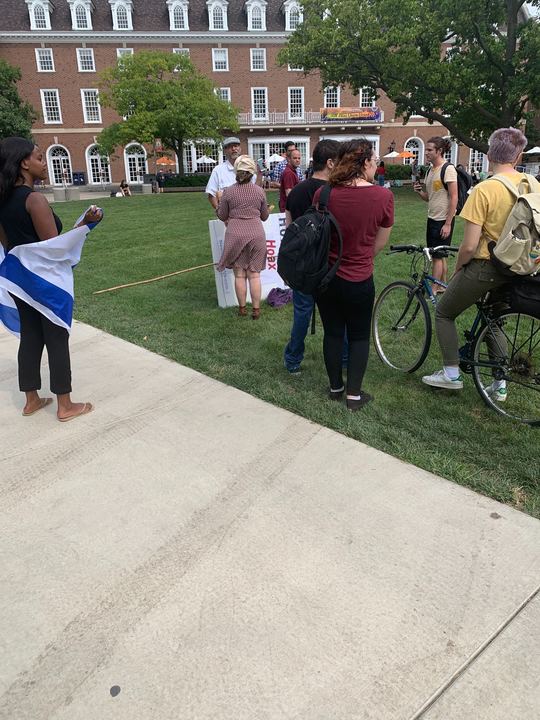 Counter-protestors confront an anti-Semitic speaker on the Main Quad Tuesday. Rabbi Ariel Naveh, a senior Jewish educator at Hillel said he wasn’t shocked by the speaker’s presence. Others also expressed disappointment and shock.

On a sunny Tuesday morning on the Main Quad, minority students and faculty at the University were reminded of a troubling rise of campus bigotry when an anti-Semitic demonstrator arrived with a sign declaring the Holocaust to be a hoax.

“We started getting calls about this guy at around 10 a.m. (Tuesday) from concerned students, concerned faculty members and concerned parents,” said Erez Cohen, executive director of the Jewish organization Hillel at the University.

“I got here and there was a cohort of students not engaging him but just being present, and there was another crowd just standing, incredulous to what was going on,” Naveh said.

For Ahava Zarembski, a Jewish educator at Hillel, the speaker’s rhetoric brought to mind a painful family history of discrimination and suffering.

“It’s chilling,” Zerembski said. “For me, what comes up are my grandparents. My grandfather was in Auschwitz and my grandmother was in numerous camps.”

Zarembski was one of many on the Quad who directly confronted the speaker, joining a chorus of “Nazis aren’t welcome!” and telling him about her connections to the Holocaust.

Zarembski said she was one of many on the Quad who were shocked at the seeming rapidity of the rise in discriminatory speakers and actions across campus.

“A student shared with me that she was in shock that after the whole thing happened with the noose, a week later this is happening,” Zarembski said.

Naveh said in the end, the speaker’s display failed to bring actual discourse and seemed intent on merely provoking and upsetting students.

“I understand that this is a public university and your First Amendment right is precious, but if your purpose is to engage in a conversation, doing so with that message and in that kind of manner is useless and doesn’t express good faith in the people you’re engaging with,” Naveh said. “It tells them, not only do I not care about the pain of you and your family and your community, I don’t believe the pain they suffered or that you’re suffering even exists. That’s not civility, that’s just needless provocation, and that’s disappointing.”

In a quick response to news of the speaker’s arrival, Hillel organized a booth where students could grab popsicles and discuss their feelings and concerns with representatives.

“The best response to this is to be there for the students that are seeing this and to be a supportive friend to them,” Cohen said. “If hate is going to be here, we’re going to be here to respond to it by showing love, by showing caring.”

The speaker was eventually lead away by campus authorities at around noon, to the raucous cheers of counter-protestors.

Naveh said that students who may not be directly impacted should reach out to affected groups who are currently targets of damaging attacks.

Cohen said the Hillel organization offers countless opportunities for students of all backgrounds to connect with the University’s Jewish community and its history.

“Students that are concerned but afraid to address this directly, they should know that we’re here for them all the time at our center every day of the week,” Cohen said. “We’re also having a play on November 16 and 17 at the Hillel Building about Kristallnacht, which was one of the first events of the Holocaust. It’s really about learning what the Holocaust is and about the pain and suffering of Jews and many others.”

Zarembski said in the face of dark rhetoric and divisiveness, the University’s values of diversity and inclusivity need to be preserved by students and faculty alike.

“We need to be positive and kind to one another,” Zarembski said. “At the end of the day, that’s what going to beat out that kind of darkness. I appreciate the fact that there’s resistance happening, whether you’re speaking out and resisting or just being kind and learning your history.”