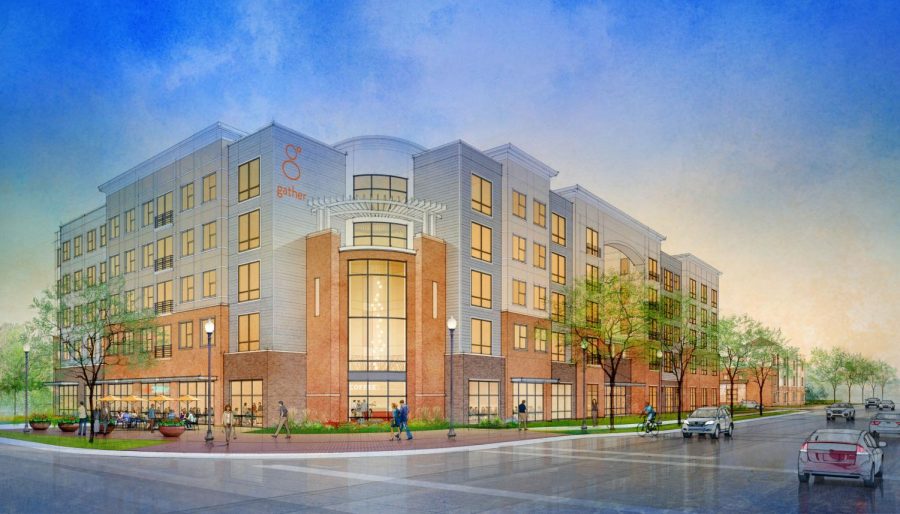 The new Gather residential area was designed by real estate company Rael Development Corporation. The development will consist of two main buildings, a five-story apartment complex north of Clark Street and a three-story collection of hotel rooms and townhomes just south of it.

Demolitions have begun on the southeast corner of University and Lincoln avenues to make way for the new Gather residential area.

The property, designed by real estate company Rael Development Corporation, will feature 200 apartments, 16 townhomes and at least 30 extended-stay hotel rooms. In all, it should house about 365 people, said principal developer Graeme Rael.

“We’re not going up 25 stories; we’re trying to build a project that’s beautiful and also one that fits into the Urbana historic district, so architecturally, it’ll blend in,” Rael said.

The Gather property follows an influx of upscale student housing buildings coming to campus. Rael said this project will set itself apart with its unit types and convenient location for certain majors located near the North Quad.

“We’re gravitating from the four-bedroom unit plan that’s prolific in the market; we’ll have a lot more studios and one-bedrooms and two-bedrooms that cater to the student who prefers a little more privacy,” Rael said.

The residential area will sit near Carle Foundation Hospital, which has responded favorably to the new development.

“We’re excited to see renewed growth in the neighborhood surrounding Carle Foundation Hospital. We look forward to serving our new neighbors and their visitors through the services we provide and collaborating with new business owners,” said Lynne Barnes, Carle’s chief operating officer in an email.

A rezoning agreement to build the Gather project passed the Urbana City Council Feb. 26 after a 4-1 vote. Several residents of the West Main Street Historic District, a couple blocks south of the development, expressed complaints prior to the vote.

Among their concerns: the height of the buildings, increased sewer load, lengthy construction time and severe transportation disruption.

The development will consist of two main buildings, a five-story apartment complex north of Clark Street and a three-story collection of hotel rooms and townhomes just south of it.

The apartment complex will encompass the entire southeast corner of Lincoln and University Avenues, stopping at Busey Avenue on the east and Clark Street to the south. The hotel rooms and townhomes will take up the northwest portion of the Clark Street and Lincoln Avenue block.

Rael expects to start construction on the project near the end of October. If all goes well, Gather will arrive in spring 2021, he said.

Urbana Mayor Diane Marlin is excited about the “attractive” Gather project. Combined with upcoming street renovations, “the gateway intersection to the city will be completely different and transformed,” she said.

Before that happens, the corridor will be a hotbed of construction. At some point in the next couple of years, workers will be rebuilding University Avenue, resurfacing Lincoln Avenue and constructing the Gather project all at the same time, Marlin said.

“It keeps me up at night,” Marlin said.

Marlin said the University Avenue improvements, funded by an $8 million grant from the state of Illinois, will make the entire area safer for all transit types.

“I would just ask all the pedestrians, bicyclists and the driving public to be very patient over the next 18 months to two years because there’s going to be a great deal of construction on the University and in the Lincoln Avenue corridor,” Marlin said. “It’ll be wonderful chaos, but it will be chaotic.”