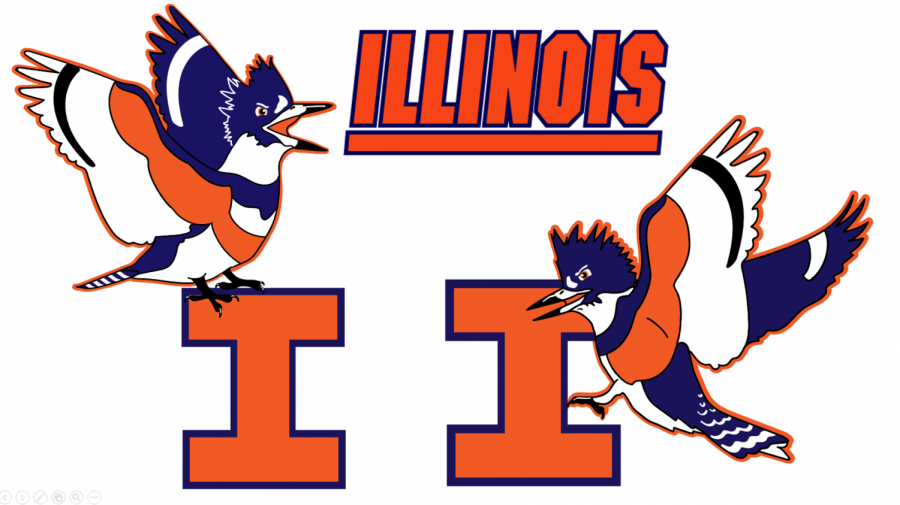 A belted kingfisher is making the rounds as a potential mascot for the University.

Growing up on a farm in Kinmundy, Illinois, Hulsey always loved birds, especially the kingfishers that hung around her pond.

While doodling on Adobe Illustrator, her birding interest, artistic ability and Illinois pride came together in a moment of inspiration.

In June, Hulsey finished designing her idea for a belted kingfisher mascot. She posted her designs to online University communities earlier this month.

It was met with a strong, mostly positive response, which caught the attention of the Illinois Student Government.

Hulsey’s original design post garnered nearly 800 upvotes on Reddit and was reposted by another student to the popular Facebook page “UIUC Memes for Underfunded Teens,” where it got over 1,100 reactions from students.

“The post was just a haphazard toss to see what happened,” Hulsey said. “Reddit is nicer than I expected it to be.”

On Oct. 13, Hulsey brought her designs to the ISG Public Relations Committee, where she won over many representatives with her “really positive energy,” said Mariama Mwilambwe, ISG press secretary and freshman in LAS.

Hulsey isn’t attached to her initial designs, which she said were her “having fun on Adobe.” When it comes to the kingfisher as a school symbol, Hulsey’s convictions are strong.

“The bird, you can’t argue with how perfect it is. It’s native to Illinois. It’s true to the orange and blue — it is literally an orange and blue bird,” Hulsey said. “It’s completely untapped potential.”

Besides its presence in Illinois and flashy school colors, Hulsey said the kingfisher has more to offer as a school symbol.

A belted kingfisher’s “cool crest” could make for hats to wear at sporting events, and kingfishers can be “made to look angry,” since they’re a predatory bird, Hulsey said.

According to Mike Ward, professor in ACES and bird migration expert, Hulsey’s assessments are accurate. The kingfisher is found all over Illinois, and her designs reflect the correct posture of the bird.

“They’re a feisty bird. They hunt by diving headlong into ponds and streams to spear fish,” Ward said. “From an ornithological point of view, the kingfisher is a good choice.”

ISG officials encourage the resurfacing of school mascot talk, and adopting a new symbol is a “top priority” for them, Mwilambwe said.

“I just want something that’s very creative, that unites everybody,” said Arnoldo Ayala, junior in LAS and student senator.

With a positive in-house response, ISG has discussed voting on the mascot themselves. If a vote occurs and receives a two-thirds majority in the student senate, ISG will send out a referendum to the student body, much like last year’s question to adopt Alma Otter as a school symbol, Ayala said.

Last spring, the Alma Otter referendum helped produce the largest voting turnout for an election in the school’s history, where it was voted down 3,807  to 3,510. Any referendum that garners over 50% support from students warrants further action by student government, Ayala said.

Before any of that happens, ISG would like to speak to the Native American House on campus about the kingfisher, Mwilambwe said. The Facebook post received multiple dissenting pro-Chief comments, and an independent designer posted a mock-up of the kingfisher reminiscent of the Chief logo.

“The consensus I’ve gotten is that people are really tired of the old mascot defining the culture on campus. Every homecoming, there’s just been a lot of really negative experiences,” Mwilambwe said.

Anna Sekiguchi, senior in LAS and student senator, spearheaded the 2019 Alma Otter referendum. Sekiguchi said she has a “fear and hesitation” another referendum would be too similar to last year’s controversial vote.

“If we put the kingfisher on the record, I think we wouldn’t get as high of turnout and as much hype,” Sekiguchi said.

However, Sekiguchi said she likes the idea of the mascot being formed “organically in the U of I community,” and the kingfisher may bridge the gap of mascot philosophies.

“You can have cute and cartoony and funny, or you can go the completely opposite direction and try to project strength, pride and honor,” Sekiguchi said. “The kingfisher falls in the middle of those two extremes.”

For many ISG representatives, as well as Hulsey, moving on to a new school symbol is appealing, no matter where the idea comes from.

“We need something. I feel like there’s a void. If you line up all the Big Ten, all 13 of them, you can see there’s mascot, mascot, mascot and a Block I,” Hulsey said. “We could have something that fits perfectly.”