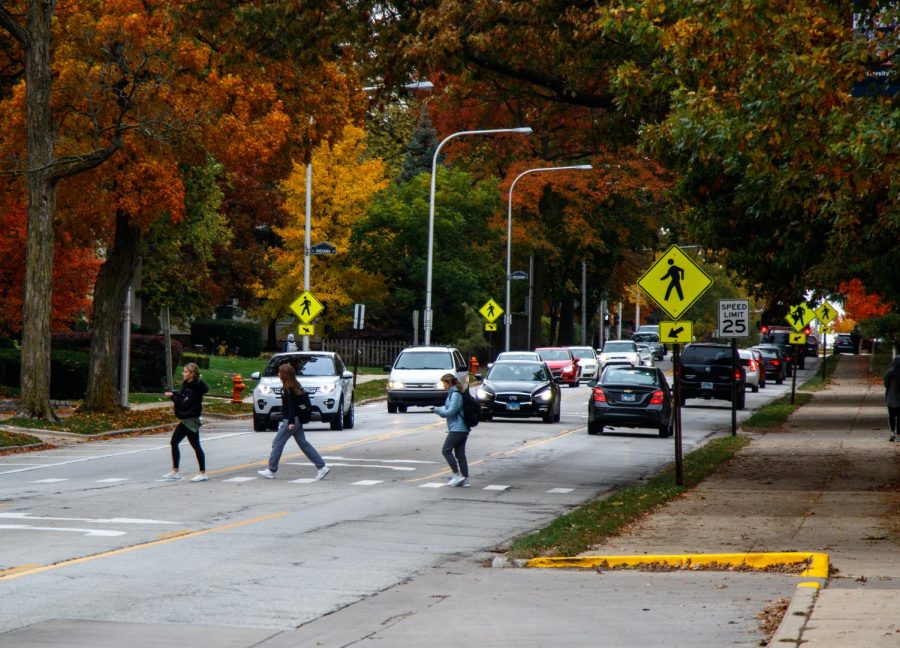 Students cross Lincoln and Indiana avenues on Tuesday. The City of Urbana is working to create more regulations for pedestrians to reduce accidents and improve safety for residents crossing Lincoln Avenue.

The City of Urbana is in the works of creating better pedestrian regulations to reduce accidents on Lincoln Avenue.

Lincoln Avenue Residence Hall, several establishments, apartments and a couple of sorority and fraternity houses lie on Lincoln Avenue. Many students cross this street while commuting to and from their classes. Although there are pedestrian signs and street lights along the street, they do not always ensure pedestrian safety.

The city has been taking incremental steps to improve safety for all types of travel along the Lincoln Avenue corridor, said Carol Mitten, city administrator of Urbana, in an email. That includes roads such as Nevada Street and Pennsylvania Avenue.

“In May 2018, public works sought and received approval from the city council to lower the speed limit in this section of Lincoln Avenue from 30 miles per hour to 25 miles per hour and install flashing enhanced pedestrian warning signs at each end of the corridor,” Mitten said.

For the current Capital Improvement Plan, $198,000 has been budgeted to determine options for safe pedestrian crossings of Lincoln Avenue, specifically between Nevada Street and Delaware Avenue.

Mitten said there is a budget limitation on programs to improve Lincoln Avenue. However, the city still prioritizes the safety of its pedestrians.

“We have limited funding available to study individual intersections and specific corridors to determine what is the best approach for a particular set of conditions,” Mitten said. “That requires us to prioritize.”

Mitten said there haven’t been any recent complaints about the street made to the department.

“I asked (the) public works staff whether we have received any specific complaints regarding enforcement of the traffic control measures along this corridor, but they weren’t aware of any,” Mitten said.

Bella Scott, sophomore in LAS, works at Caffe Paradiso, a coffee shop located on Lincoln Avenue. She said she believes there should be more regulations reinforced when it comes to stoplights.

She said the stoplights on the corridor are inaccurate and said she has nearly gotten hit by a car because of its inaccuracy.

“Basically anyone who lives in the Urbana area, they always kind of talk about or complain about how dangerous it is to cross the street, especially in the intersection of Green and Lincoln,” Scott said.

Alondra Colunga, senior in ACES, lives in an apartment on Lincoln Avenue. Although she has not been in an accident while crossing, she said she believes the street is dangerous for students.

“It’s a very busy street,” Colunga said. “It is difficult to cross the street because there (aren’t) a lot of crosswalks. If there are any, they are really far from where I live.”