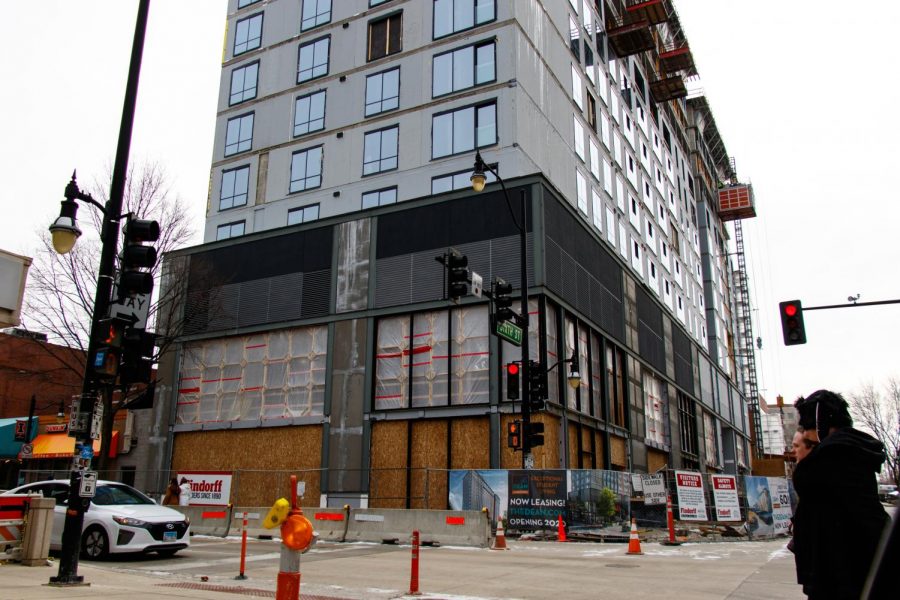 A Target is being built on the first floors of a high rise apartment building on the corner of Fifth and Green streets. With development booming in the Champaign-Urbana area, many businesses like Trader Joe’s are considering moving to the area.

On top of the recent establishment of Chick-fil-A in Champaign and the Target scheduled to open on campus this year, Trader Joe’s may be the next business coming to the area.

Kenya Friend-Daniel, public relations director for Trader Joe’s, said in an email that the business is still in the early stages of planning for future locations.

“We think Champaign is a great city, and we’re always looking for great locations that would be a great fit,” Friend-Daniel said. “Whether or not we open a store there in the near future, or ever, will depend on a number of factors, including finding a great space/location.”

Athena Lai, sophomore in FAA and former employee at Trader Joe’s, said she still always visits Trader Joe’s whenever she has the chance.

“I like to try their new items,” Lai said. “But some items that I would always repurchase are their gnocchi, dark chocolate, dried fruits and yogurt.”

Lai said she thinks if a Trader Joe’s is close to campus or at least a walkable distance, students would shop there regularly.

“I believe the price is similar to Meijer, County Market and Walmart,” Lai said. “Since (Trader Joe’s) sells products of its own brand, it decreases the cost.”

According to a News Gazette article, Dan Bane, CEO of Trader Joe’s, said he is looking at population density, median household income and education as factors in a new Trader Joe’s location.

“These are factors that are important for most companies. And I would say that Champaign-Urbana does have these characteristics,” Lai said. “In addition, Trader Joe’s is a popular store amongst the younger generation, so throughout the school year I believe the business will run smoothly.”

In addition, a new Trader Joe’s could potentially help students out with more than just groceries. Lai worked at a Trader Joe’s in California for about half a year when she was 17.

“Trader Joe’s produces similar products to other stores with its own brand, which is the reason behind its low cost, but the best part is that they sell almost anything, such as dog food, beauty products, fresh produce and snacks,” Lai said. “Also, the company is aware of different customer needs like vegetarians, gluten-free diets and cultural dishes, hence the variety in their food products.”

Lai added Trader Joe’s allowed her to have a flexible work schedule in high school. She had a positive work environment with friendly co-workers and great benefits.

Allan Sokol, sophomore in LAS, also said he will go to Trader Joe’s when home from college to buy groceries and snacks.

“The store often offers really tasty foods at a low cost, which matches the needs of students,” Sokol said. “Trader Joe’s would (be) high quality and probably cost much less than County Market.”

Sokol said he thinks offering grocery delivery systems, such as Instacart, would bring in more sales for the store.

“My roommate, for example, only orders groceries online,” he said.

Sokol said he would shop at Trader Joe’s if it were on campus and close to his apartment on Green Street.

“It’s all about location and price,” Sokol said.

Dan Bane, CEO of Trader Joe’s, was unable to comment at the time of publication.