Champaign places No. 50 of 100 cities for sexually transmitted diseases 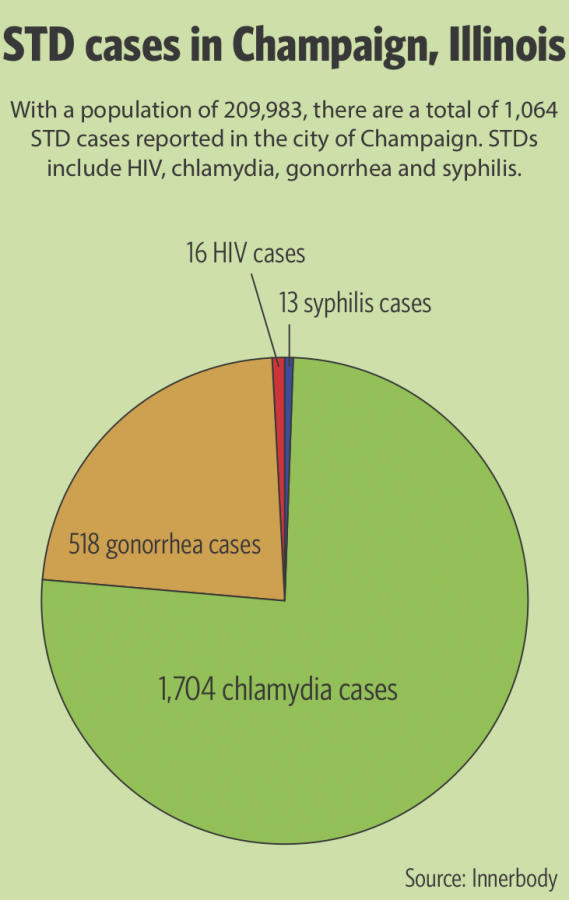 Ranking 100 cities in the United States that have high sexually transmitted disease cases, a recent study ranked the city of Champaign to be number 50 of the highest STD rate per 100,000 people.

Innerbody.com, the largest medical and wellness testing guide online, published the study that ranked U.S. cities with the highest STD rates by collecting data from the Centers for Disease Control and Prevention.

The CDC published its STD Surveillance report, which includes updated data on STD cases across states and metro areas.

The CDC report included numbers from 2018; however, the Innerbody report was published early January. A CDC report of 2019 STD cases is not yet available.

Innerbody’s research team was able to analyze the CDC’s data on a “city-by-city basis.”

According to Innerbody.com, “STD rates continue to run rampant in the South. Nearly half of the top 25 cities with the highest STD rates are in the South.”

The top three cities according to Innerbody are Los Angeles, Chicago and Houston, respectively.

Eric Rodriguez, co-founder and managing editor for Innerbody, said this article will create a new perspective and increase awareness of STD testing for its readers and the community.

“The STD rates are rising across the nation, and we are trying to shed some light on this fact and our kind of secondary motive,” Rodriguez said. “We are a website that promotes getting tested for STDs. We are trying to promote the fact of how easy it is to get tested these days.”

According to the study, with a population of  209,983 people in Champaign county, there are 1,064 STD cases per 100,000 people. Within these cases, STDs include but are not limited to the human immunodeficiency virus, chlamydia, gonorrhea and syphilis.

According to Rodriguez, CDC did not report on all STDs because they only report on the four most common types of diseases.

“Millions of people in the United States currently have an STD, but they do not know about it. This data only counts reported STD cases, and it significantly undercounts actual member of STD cases,” Rodriguez said.

Although the study did not focus on why there is a high rise of STDs, specifically in Champaign, Rodriguez said he believes the reason Champaign placed No. 50 is that it is a college town.

Two types of cities that frequently appeared in their study are large college towns and cities with military bases, Rodriguez said.

Doctor Robert Woodward, medical director at McKinley Health Center, said he also agrees that a reason why Champaign received that rank is the result of the population.

“In looking at the list, almost all of these cities have one or more universities in them, and a young healthy population is more sexually active,” Woodward said in an email.

Rodriguez said he hopes higher authorities would take action in offering better resources for individuals regarding their sexual health.

“I would say if you increase funding to free testing clinics, that would raise and make more people more aware that they do have STDs and will help them from spreading,” Rodriguez said.