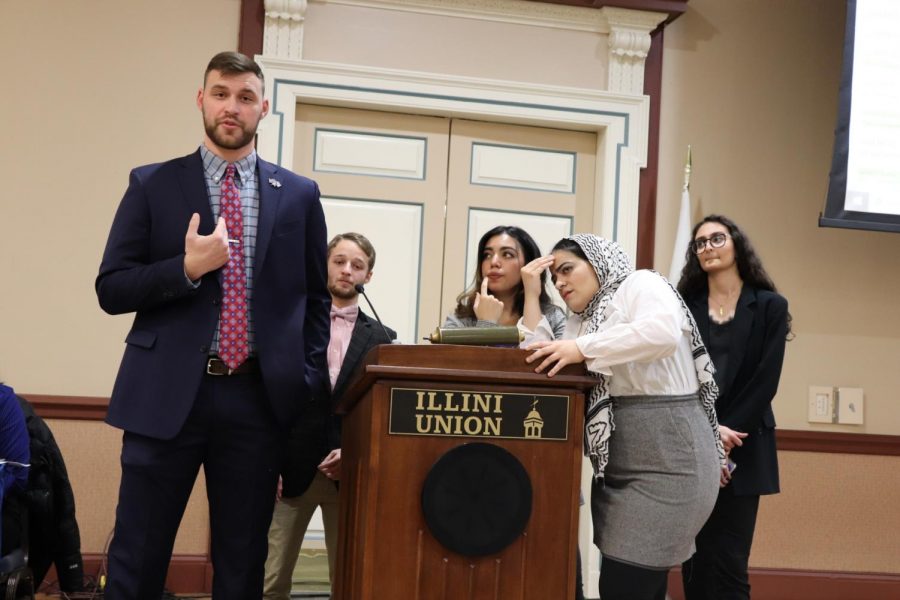 Illinois Student Government senator Ben Crane answers a question about the proposed amendment to Resolution 03.61 as the bill’s authors look on. The resolution passed through the student senate on Thursday at 12:30 a.m. in Illini Union Rooms B and C.

Resolution 03.61: “Violations of Human Rights in University Investments,” passed through the student senate with 20 in favor, nine against and seven abstentions at 12:30 a.m. Thursday after five and a half hours of public comment, amendment discussion and senate debate.

The non-binding resolution calls for the University to divest from three leading defense companies: Elbit Systems, Northrop Grumman and Raytheon, all of which have supplied weapons or defense technology to Israel.

It also mentions the companies’ supply of weapons to the Chinese, Brazilian, Chilean and Honduran governments — the latter three to resist civilian protests — as well as supplying surveillance technology to the Russian Ministry, U.S. Immigration, Customs and Enforcement and the Los Angeles County Jail.

The resolution, authored by three Palestinian students from the UIUC Divest RSO, divided the audience down pro-Israel, pro-Palestine lines. Representatives from Illini Hillel, the Chabad Jewish Center and five Jewish Greek life organizations showed up to oppose the resolution. Some student organizations showed up in support, mainly the University’s chapter of Students for Justice in Palestine.

The meeting opened with over two hours of public comment. Of the 34 individual speakers, eight favored the resolution and 26 argued against it.

Supporters focused on the violations at hand, framing its potential passing as one step closer to a more holistic divestment solution. Several supporters cited Jan. 14, 1987, when the University Board of Trustees voted to divest $3 million from South African companies as a suitable precedent for the resolution.

Detractors argued the resolution’s five direct mentions of Israel were “disproportionate,” and the document was a veiled attempt at reviving the Boycott, Divestment and Sanctions movement, which they called anti-Semitic.

BDS advocates for the cutting of economic ties to Israel until the state ends occupation of the West Bank and grants equal rights — and right of return to Israel — for Palestinians and their descendants.

Several labeled the resolution as a continued silencing of Jewish voices on campus after October’s controversial ISG Resolution 3.29, “Condemning Ignorance of Racism and Equating Anti-Zionism with Anti-Semitism.” Others pointed out merits of the mentioned companies, as well as the difficulty of ditching the index funds that the University uses to invest in them.

The public comment phase was rife with interruptions and exclamations from audience members.

Nina Raab, freshman in LAS, referenced a previous confrontation from the passing of Resolution 3.29 while voicing her opposition to the current resolution.

“When I walked into the room, I was confronted by a huge sign held up by SJP that said ‘F— Nazis.’ They called us Nazis!” Raab said.

“They’re right!” one student in the audience said.

The clip of the confrontation has since circulated on Facebook to over 3,000 views.

According to ISG senator Sudarshana Rao and SJP, authors of the resolution and other members of SJP met with the student afterward to condemn the statement.

“This comment was made by someone that is unknown to SJP and its allies. Once we were made aware of who this person was, we demanded for them to apologize to the affected parties,” SJP said on their Facebook page.

After the public comment phase, the authors weighed in on the resolution, focusing on the justification for mentioning Israel.

“Even with a historical and material basis on the murder of Palestinians, the opposition has decided to dehumanize Palestinians,” said Buthaina Hattab, co-author of the resolution. “Three Palestinian women who authored the bill, including me, mentioned Israel because our experiences, our lived experiences, bring us to the forefront in the struggle against apartheid.”

An early amendment by student senators Cody Bainbridge and Fawaz Tirmizi corrected a few citations and figures in the original resolution and passed through the Senate 36-1-0.

Two Jewish student senators, Ian Katsnelson and Ben Crane, led the Senate opposition. Katsnelson presented his case via slide deck “that the true intent of the resolution” was to continue BDS.

Katsnelson proposed an amendment that would remove all references to countries and “named entities that are overly specific” from the resolution. He sent out a draft of his revisions to the student senate.

Many student senators, and the authors themselves, reacted harshly to the proposed amendment.

“If this amendment passes, I am not an author anymore,” said co-author Dunia Ghanimah, senior in LAS. “If you take out Israel’s name, then you are literally delegitimizing everything that we were talking about today.”

Several senators criticized the removal of the ICE from the amendment, and the lack of advance notice given for an amendment that would significantly change the resolution.

“It would be counterproductive to remove countries that are committing human rights abuses that we want to divest from, especially removing the countries that are targeted by them too,” said student senator and sophomore in LAS  James Kosmopoulos. “It gives me a kind of sentiment similar to ‘All Lives Matter.’”

Casey Griffin, student senator and senior in FAA, called it a “toothless” version of the original resolution, and “incredibly disrespectful” to the authors and senate body.

After 20 minutes of senator debate, the amendment was voted down 11-22-6. Katsnelson acknowledged his presentation was prepared “last minute,” and that he did not consult the authors of the original resolution prior to presenting.

Once the resolution was passed, Illini Union Rooms B and C broke into cheers and applause from supporters, while several Jewish students shouted “veto” in hopes that the executive branch would stop the bill.

On Sunday, their calls were answered. ISG president Connor Josellis vetoed Resolution 03.61 at his cabinet meeting, condemning all remarks that “have made students feel unsafe and have fostered climate of hate on this campus.”

“One of my primary obligations as student body president is to make sure that all students are able to participate in a campus environment where all feel safe to learn and be themselves,” Josellis said Sunday. “Approving a resolution that hundreds of students have said will do the opposite would not be doing my job.”

Illinois Student Affairs put out an online statement after Wednesday’s meeting, reiterating the non-binding nature of ISG resolutions, adding the University has “no plans to act on this one.”

“Illinois Student Government … provides students the opportunity to engage in discourse on issues such as this one that have been debated around the world for centuries, but does not represent the university administration,” Student Affairs said in the statement.