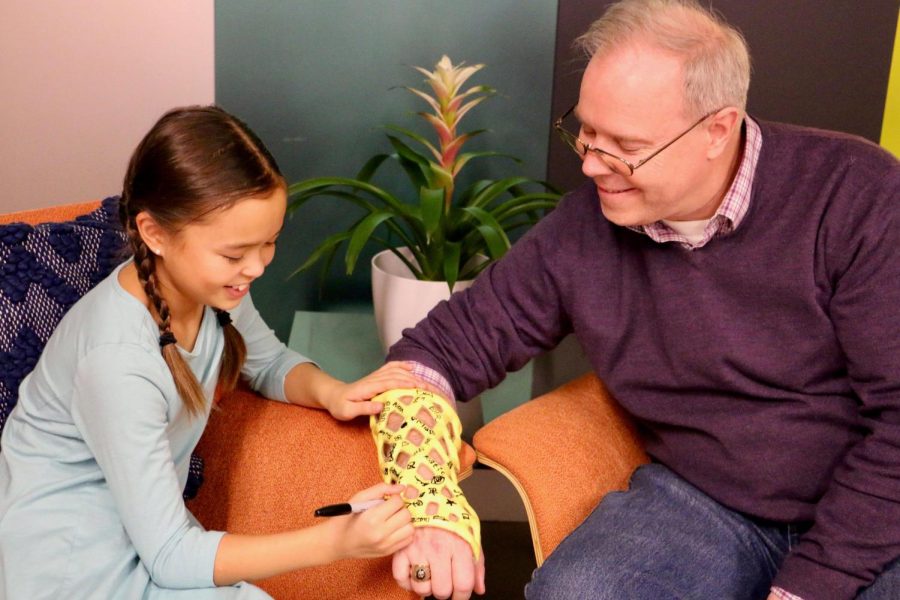 Pictured above is a The Cast21 Solution product being signed. The product was created by University alumni.

A startup originating at the University, The Cast21 Solution, was recently named in the Forbes “30 under 30” list for 2020.

The co-founders, Ashley Moy and Jason Troutner, were awarded recognition for their achievement in Healthcare with their creation and success of the innovative Cast21 product.

Moy graduated from the University in 2016 with a major in bioengineering and a minor in chemistry and also earned a TEC innovation certificate, which was previously referred to as the iFoundry Innovation Certificate.

According to Moy, the cast provides patients with an alternative to a traditional cast or brace used for broken bones. It is waterproof, lightweight and can be manufactured at scale.

One user, Marijo Cox, wore a cast after a car accident. At first, Cox was given a traditional, bulky cast but was then able to switch to the new Cast21.

“The doctor brought it in and told me it’s much more comfortable — it’s lighter, you can shower in it — and asked me if I’d be interested. I took one look at the big cast I was wearing and one look at the one in his hand, and I said, ‘Yes, please!’” Cox said.

The project originated as a brainstorm for an independent project between Moy and a few other students at the University. Then, it became a senior design project and continued to grow.

Moy said the process of making the idea of the product into a reality was a beautiful blend of exciting and nerve-racking.

Since then, the product has seen success, receiving recognition for its achievements and becoming available in different states around the country. Soon, the company looks forward to adding more clinics in other states to be able to reach even more patients and doctors.

“We were really excited to have some of our team members recognized in the ‘30 under 30’ list,” Moy said. “But for us, the wins are the amazing feedback that we get from our doctors and patients, like when a doctor or a patient calls us and just lets us know what an amazing experience they had.”

Moy said the process of creating the product is ongoing. It’s one that is a constant feedback loop between the design team, users and partners. Additionally, the name of the cast itself is currently in the works, but for now, it remains The Cast21 Solution.

The startup is one of a long list of successes from the University entrepreneurship.

Stephanie Larson, associate director of Innovation & Entrepreneurship for student programs, said the vibrant entrepreneurship ecosystem on campus and in the community is crucial for a successful startup.

“According to many student entrepreneurs and successful alumni, like Ashley Moy of (The) Cast21 (Solution), I believe you have to be passionate about your idea,” Larson said. “Entrepreneurs say that determination, perseverance, hard work, risk tolerance, personal experiences, unwavering commitment, consistency and more help while creating a startup.”

As for students who are pursuing entrepreneurship, they should go for it, Moy said.

“I do not personally think there’s a better time in your life where you’ll have the risk profile that could tolerate entrepreneurship,” Moy said.