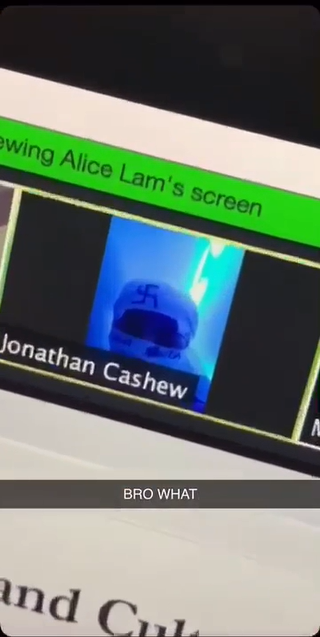 A student’s Snapchat video depicts a man wearing a headband with a swastika drawn on it disrupting an online Zoom class.

It’s the first high-profile instance of “Zoombombing” the University has had to deal with, where uninvited users disrupt virtual chat rooms.

Hundreds of students attended the virtual I-Connect workshops. The incident is being investigated by the University of Illinois Police Department.

According to Pat Wade, communications director for UIPD, a workshop facilitator said he does not believe the offenders are affiliated with the University.

Some of the hijackers revealed their faces on the screen, while others attempted to hide their identities by shutting off their video or wearing masks.

Many students took to social media to share their accounts of the incident, along with videos some of them captured showing the hijackers.

Abbey Malbon, freshman in Social Work, was a participant in one of the meetings. She said that while she could only see two of the hijackers on her screen, it sounded as if there were many more.

“One of them appeared to be a grown man who was showing his swastika tattoo on his chest,” Malbon said. “The other person I saw had their face hidden. His face was covered in what looked like gauze, and you could just see his eyes.”

Riccelo Guidorizzi, freshman in Engineering, said he saw at least four or five of the hijackers’ screens.

“You could see in the background Nazi symbols and so forth,” Guidorizzi said. “There was actually one guy in the corner who actually decided to show us his ass. So that was definitely an uncomfortable sight.”

Guidorizzi believes a registered student shared the Zoom link to another website, which gave access to the hijackers.

“I spoke up and said, ‘I’m pretty sure someone in this Zoom meeting shared a Zoom link to some kind of online racist hate group,’ and after that, the I-Connect meeting was shut down,” Guidorizzi said.

Emma Holzhauer, sophomore in LAS, said prior to the “Zoombombing” there were multiple disruptions and instances of students not taking the meeting seriously. One participant called a facilitator a “b—-” and was removed from the meeting.

Once the hijackers showed up, the meeting quickly spiraled into chaos.

“People were becoming louder, and started using threatening words like ‘kill the n-words.’ Then, a person wearing a mask with swastikas drawn on it said something along the lines of ‘Well, I have something better,’ and he pulled up his shirt and showed that he had a swastika tattooed on his chest,” Holzhauer said.

According to Holzhauer and other students in the meetings, the hijackers joined the group simultaneously, which made it difficult for facilitators to remove all of them. After a brief struggle, facilitators from all three meetings decided to end the workshops altogether.

Holzhauer said she thinks the University, specifically the Chancellor, should try to address the issue on a larger scale.

“I just worry for minority students on campus who are worried about all of the incidents on campus about white supremacy, and they’re not really being told about it. I wouldn’t want to just find out about that stuff through Twitter. I want to know that the University is taking actual systemic action against it,” Holzhauer said.

Following the incident, the participants of the hijacked I-Connect meeting received a detailed email from Ross Wantland, the University’s director of diversity and social justice education. In the message, Wantland passed along the statement of the students who were facilitating the meeting:

“As the facilitators that were in charge of the workshops tonight, we want to personally reach out to say we are sorry that all of you had to witness this tonight. This was something that no one should have had to go through. We hope no one feels this unsafe or shocked in a university-sanctioned space again. To the people who were defending us against disruptors, thank you. To those who were just trying to have a normal workshop, thank you. To the people who were shocked and confused by what happened, and maybe even personally affected or triggered, we are standing in support of you and we are here for you.”

The students who attended the I-Connect meeting will still receive credit despite the workshops ending early. The incidents in the three separate meetings have been reported to the University’s Office of Student Conflict Resolution and Bias Assessment Response Team.

“It’s important that the University doesn’t treat this like it’s an isolated incident,” Holzhauer said. “I just got here this year, and I can think of now three different incidents of white supremacy on this campus. The noose in Allen hall, the swastikas on the side of the building and now there are neo-Nazis infiltrating a workshop on inclusion and diversity.”

“I think that without recognizing that this is a pattern of white supremacy, it’s just going to act as the Band-Aid over a way bigger issue.”