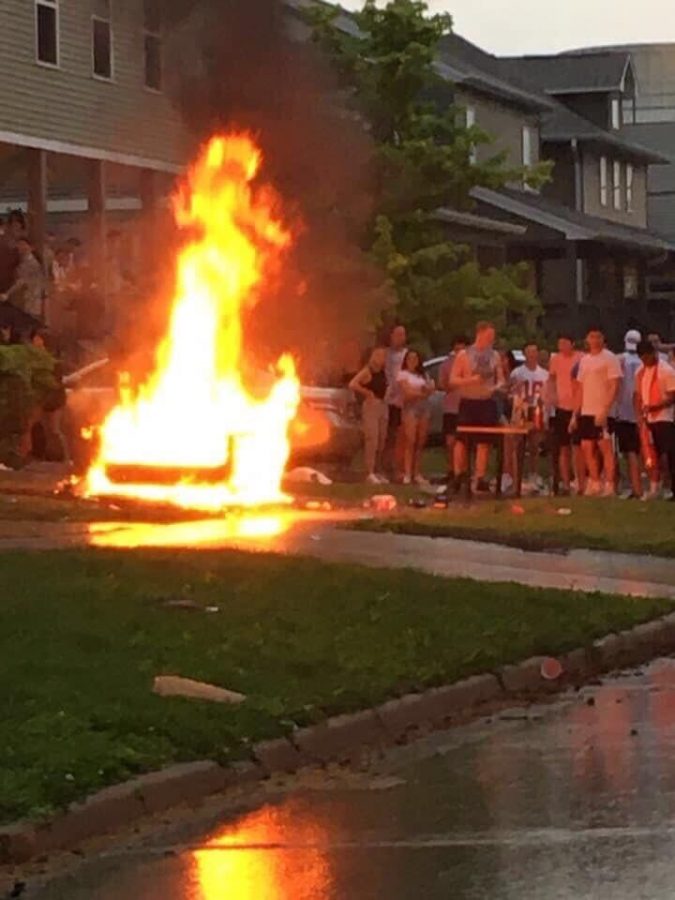 Students watch as a couch goes up in flames in Champaign on May 16.

On May 16, the Champaign Fire Department responded to a call about a fire on the front lawn of a senior house on campus.

The incident took place just hours after the University’s virtual commencement celebration. Graduates, their families and friends attended the online ceremony as the regular in-person commencement was postponed due to safety concerns amid the COVID-19 pandemic.

Sam Lesak, senior in Engineering, said he was at another senior house nearby when the incident occurred.

“I couldn’t tell you a time exactly, but we started seeing smoke,” Lesak said. “We started seeing people running the streets. At that point, I knew something was happening. So everyone just merged outside and watched.”

According to Lesak, the entire street was rowdy, as it was the last day the seniors could be in their houses before moving out.

“I’m pretty sure every house down the block was completely filled. Everyone was having a good time; rain started coming down,” Lesak said. “And then I think it was a couch, I don’t know what they lit exactly, but it went off with a bang, literally.”

After the fire started, it was only a matter of time before CFD showed up.

Lesak said the fire was so close to the house he worried it would catch on fire. He added that once the department showed up, a group of firemen with a hose began spraying out the fire as everyone circled around, taking in the scene: all while recording and still drinking.

“It was just some seniors trying to leave their mark and to go out with a bang. It was nothing political or organized like that,” Lesak said, “I just know that whenever there’s a big celebration of something like sports, whenever a town wins, they usually head to the streets and light random things on fire, so I assume it’s something like that.”

Randy Smith, public information officer for the CFD, said it was around 7:28 p.m. when the department received the call. The department does not know exactly when the fire started.

“Firefighters described the scene in their report as a group gathered around what appeared to be a couch on fire in the front yard,” Smith said. “Once on the scene, firefighters deployed a single, small diameter hose line and quickly extinguished the fire.”

One witness posted photos of the fire on social media in the private Facebook group “Spotted in Chambana.” The post quickly generated attention from users in the group who took to the comments to voice their opinions on the incident.