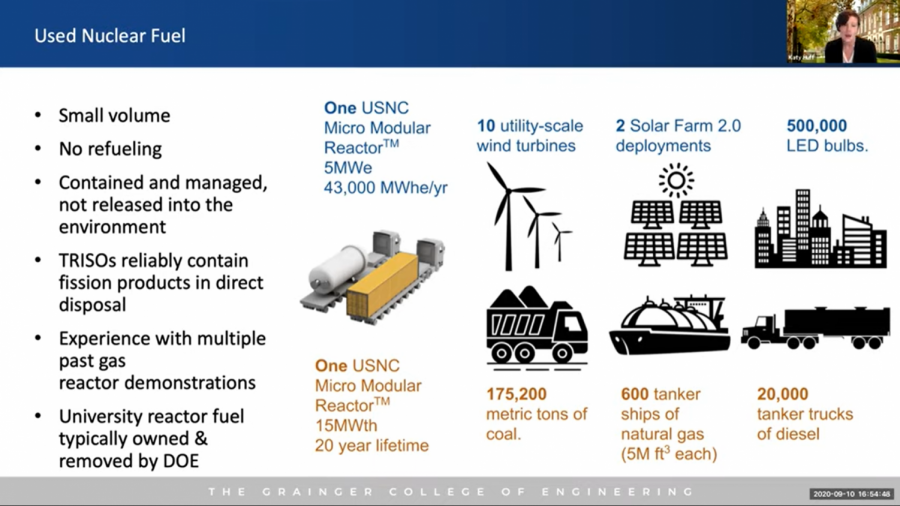 The University may soon be home to a new micro-nuclear reactor, which would provide campus with clean energy, as well as opportunities in research and education on campus.

The project is pending approval and funding by the U.S. Department of Energy. If awarded, work will begin in 2021, with projected completion by 2026.

The DOE would give the University $44.8 million for the project, said Caleb Brooks, professor of Nuclear, Plasma and Radiological Engineering.

“It’s no surprise that the University of Illinois has been working at the cutting edge of future energy and technologies,” Brooks said. “And if the project is awarded, the University is in position to deliver on a critical research and education necessary for a climate-conscious energy future.”

The reactor timeline would consist of four and a half years of regulatory review and environmental impact, safety, operational license review by federal and state authorities, then construction if all else goes well. Currently, the plan is to locate the reactor next to Abbott Laboratory.

“It fits wonderfully (like) a glove on the hand in terms of campus needs, not only in terms of training and research, but also in terms of the energy needs of the campus,” said George Gross, professor in Engineering.

The Illinois Institute for Sustainability, Energy and Environment hosted a meeting over Zoom with nuclear engineering faculty and student and faculty leaders to talk about the proposed technology.

According to Katy Huff, assistant professor of NPRE, the micro-reactors are small, transportable devices, that are manufactured in factories for economic efficiency and quality assurance.

“Notably, the strongest of these feedback mechanisms respond hundreds of times faster than any human could react, stabilizing that reactor temperature without the need for human intervention,” Huff said.

The micronuclear reactor can last for 20 years without needing a refuel. The lengthened fuel life is more efficient, reducing the eventual nuclear waste volume.

The University’s utility system is broken down into three parts: electric, steam and chilled water. The implementation of the reactor would be able to supply energy for both the electric and steam systems.

“The fact that the reactor can provide both steam and electricity is really a very fortuitous situation of the needs of the campus, and is going to help very much with reducing the carbon footprint,” Gross said.

In parallel to the University’s reactor, three units are proposed to be constructed for power delivery at the site of another consortium partner. In addition, two units are planned to be built in Canada.

Creen Ahmad, senior in ACES, said there is further excitement as the University is prioritizing sustainable development.

“The perspective is optimistic, constructive and insightful,” Ahmad said. “The most common belief I have heard is that we cannot decarbonize energy without having nuclear in the mix. As expected, many concerns were raised regarding safety. But as we have already learned, the system is ensured to be safe and foolproof.”