Opinion | Lundgren Hall is not the worst 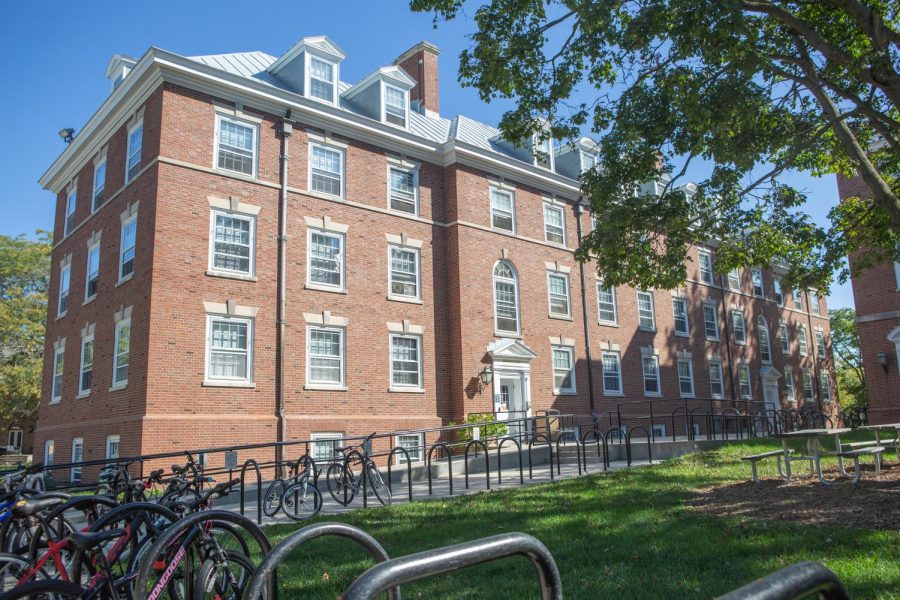 Lundgren Hall stands on the corner of Gregory Drive and Fourth Street on Sept. 21. Lundgren Hall has many benefits that new students should take advantage of.

If there ever were a theoretical survey of least appetizing university dorms, Lundgren Hall may top the list.

Yet for those more appreciative of campus’s less-craven housing, Lundgren is the premier position for one’s commencement into the University.

For those unfamiliar with the dorm, Lundgren sits beside the Ikenberry Dining Hall and betwixt Fourth and Gregory Street. The building — opened in 1941 — embodies a yesteryear feel of campus with its classic exterior marked with red brick and charismatic windows. As for the interior, the building’s mid-century traditional aesthetic serves as the appropriate appetite for those with earnest regard for academics.

Still, whenever Lundgren is brought up amidst conversations over dorms, the building yields a sympathetic and anxious “Oh… Lundgren?”

Advertised as a prime location for serious solitude and a relaxed atmosphere, Lundgren delivers on those promises, yet there remains a peculiar social stigma attached to the run-of-the-mill dorm.

Common attacks on Lundgren include its lack of air conditioning — similar to several other dorms — as well as its contemporarily orthodox “all-male” policy.

It can be conceded that Lundgren’s fixation on the “all-male” aspect is unconventional in the 21st century, yet with that oddity aside, Lundgren itself perseveres as a capable choice.

Lundgren is best analogous to considering relationships in concern to how your parents may feel.

On the one hand, Wassaja Hall may be the flashy, Wall Street yuppie who would easily hang with your dad and crack open a cold one. On the other hand, Lundgren is dependable — when not refitted to COVID-19 housing — and is an adequate, safe option to lovingly write home to mom about.

Nevertheless, Lundgren’s biggest attraction is its offerings of single rooms.

Although there are scattered options across campus for single rooms in dorms, Lundgren’s are unique due to their mid-century traditional charm and independent quality.

Likewise, nothing situates you better for life than consistently waking up to a monstrous garbage truck at 5 a.m.

Because of the absent air conditioning, one must relentlessly open their window to occasionally invite even the tiniest refreshment of cool air. With this, one is greeted daily by C-U garbage trucks at the crack of dawn.

An obvious drawback to many, this con resolves into a pro because it vehemently — for better or worse — immerses one into a city-like environment. Primarily for those who later desire a New York, Chicago or Los Angeles livelihood, Lundgren is the necessary practice to acclimate yourself to any city’s hustle and bustle.

Despite my Lundgren experience being cut short due to COVID-19 housing restructuring last year, I stand by Lundgren as an acceptable choice for housing.

Although the big-whigs like Wassaja or Nugent Hall will certainly be first or second preferences, consider Lundgren not only in your rankings but in your heart as move-in season swiftly approaches.