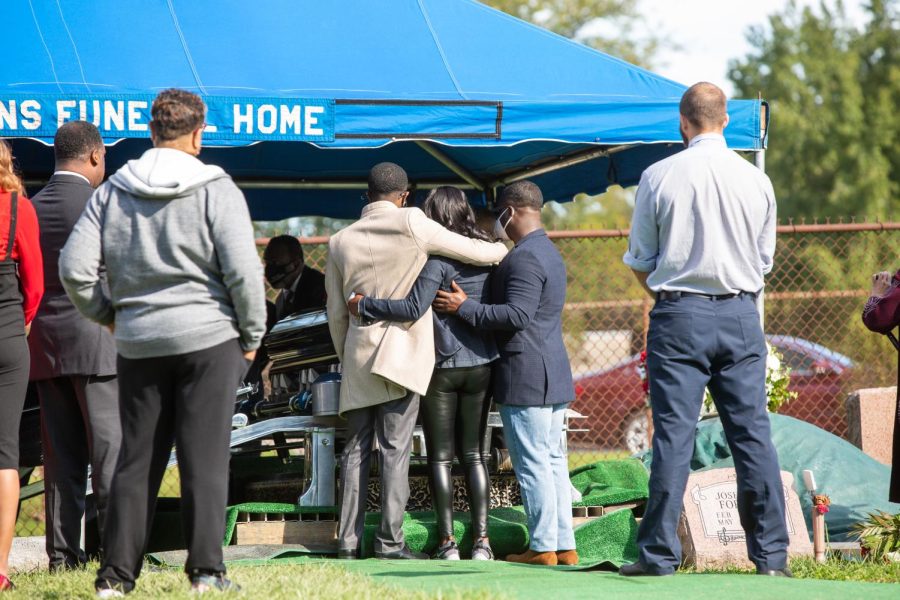 Carmen Day, mother of the late Jelani Day, stands in front of his casket embracing family members during his funeral service at the Spring Hill Cemetery in Danville on Oct. 19. It is important to utilize your voice in seeking justice for Jelani Day from authority figures.

By The Daily Illini Editorial Board
October 25, 2021

There are countless misdeeds to the Day family amid Jelani’s bewildering disappearance and death. However, the worst crime amongst all misconduct is lack of closure.

Jelani, a graduate student from Illinois State University, was reported missing on Aug. 25. Following the discovery of a body in Peru — an hour north of Bloomington-Normal — Jelani was not identified for an additional month. On Oct. 26, LaSelle County coroner determined drowning to be the cause of death. The manner of death remains unknown.

“I’m not the first mother to lose a child, but when somebody loses their child, majority of the time they know what happened to them or know why they’re burying them,” Jelani’s mother, Carmen Day, disclosed to The Daily Illini at her son’s funeral.

Without this critical closure, the Day family remains in a purgatory where counteracting narratives fly, and justice is absent.

At a recent event addressing Illinois collegiate organizations and activists, Rev. Jesse Jackson and organizers from his Rainbow PUSH coalition urged students to become involved in obtaining justice for Jelani, beginning with a march on Tuesday at 2650 N. Peoria St. in Peru, Illinois.

Commencing at noon — with organizers suggesting to arrive at 11 a.m. — the march will begin around the Peru police station and end at the Illinois Valley YMCA, where Jelani’s car was found. As this represents the next crucial step for public pressure and accountability, students should participate to deliver the Day family justice.

Besides ambiguity surrounding Jelani’s last moments, the investigation itself warrants thorough scrutiny and attention from bodies like the FBI and/or Illinois State Police. With “unusual circumstances” encircling Jelani’s death, investigators have yet to conclude both how Jelani ended up in the Illinois River, as well as what/who contributed to this devastating case.

Moreover, Day has continually pleaded for assistance from the FBI, Illinois State Police and the Illinois Attorney General to intervene and provide the answers local law enforcement have floundered. As such, it is the public’s responsibility to echo Day’s requests and urge these entities to supply justice.

For students, steps to bring Jelani justice begin with Tuesday’s march and spreading the message of injustices committed. For each passing day without answers, Day’s family suffers from the open wound. For instance, Day recently highlighted the obscurity of whether local law enforcement was cooperating with the FBI, in addition to discrepancies with autopsies committed by the LaSalle County Coroner’s office versus an independent autopsy ordered by the family.

As a result, there is no cohesive narrative where justice may enter for Jelani.

“I see that Gabby is missing, and I see (her) getting the help. I wasn’t getting that attention,” Day divulged to “Good Morning America” in September.

While the media and law enforcement resources focused on Gabby’s case — its most recent “Missing White Girl” — Jelani and countless other missing Black youth are deprived of the necessary attention to assemble accountability and justice for their respective investigations.

With the public concentrated on one specific person, local law enforcement, such as in Jelani’s example, are given a pass to deliver mediocrity, not justice.

It is now our responsibility to compel the powers that Jelani’s life is worth more than a “cause unknown.” When considering how to assist Day’s family, we must ask ourselves how we view particular lives. Is Jelani’s life worth less than Gabby’s because of the color of his skin? Is it acceptable the best justice provided to Day is “unknown” causes of death?

Equal treatment under the law is distant from the Jelani case. Similarly, with inconsistencies within the investigations, higher authorities must step in to clean this mess.

Utilize your voice in standing up against this injustice. In a chorus of public pressure, only then can the law be legitimately applied. Following Tuesday’s march, justice will remain a difficult feat, yet the marathon to assemble it requires your presence.