Pedestrians should stay out of bike lanes 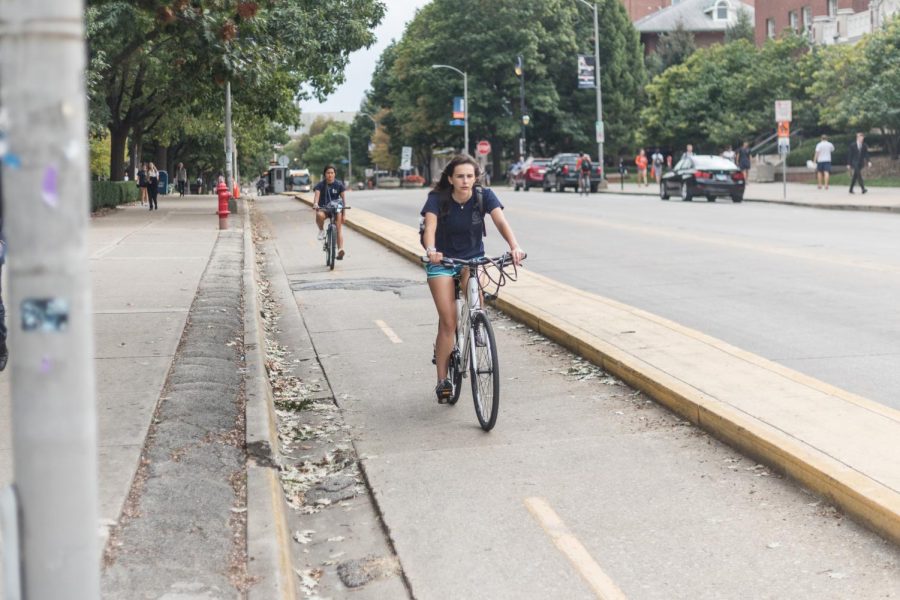 Students ride their bicycles on Wright Street on Tuesday. Columnist Kyra advocates for both pedestrians and cyclists to exercise caution when crossing bike lanes.

One of the most hotly contested conflicts on campus — more than our rivalry with Purdue and more controversial than the competition between Engineering and LAS students — is the comport of bikers and pedestrians in their respective lanes. Bikers rejoiced after the new bike lanes were built on Green Street in front of the Union; but, as a biker, my joy was dampened by the swarms of people disembarking from buses, who stroll leisurely across the bike lane.

If pedestrians don’t want bikers plowing through people on the Quads, they need to respect the bike lanes. Give a little to get a little.

The complaint about bikers I hear most frequently is they bike on sidewalks or through the Main Quad. These are legitimate arguments. Cyclists move at high speeds relative to pedestrians, from 10 to 25 miles per hour. It’s dangerous for bikes to be on the same path as pedestrians, not to mention frustrating for the people walking to class.

But, in order for us bicyclists to get out of your way, our own lanes have to be clear! I can’t count the number of times I have been on my way to class and need to nearly throw myself out of the way to avoid hitting someone with earbuds in and texting who has stepped into the bike lane on Wright Street without looking.

Champaign and Urbana both have unusually good resources for bikers. In 2010, Champaign was named a bicycle-friendly community by the League of American Bicyclists. As a Chicago native, it is a nice break to be able to use bike lanes protected by concrete like the one on Wright Street adjacent to the Main Quad.

These precautions are not just for bikers’ happiness — they save lives. Over 800 cyclists were killed by cars in 2015 in the U.S. While we bikers love it, it is sometimes a dangerous form of transport. As such, it’s necessary for cities to construct bike lanes, like those we see around Campustown and elsewhere in C-U.

Further, in order for bike lanes to be effective, they have to be respected. They are not constructed solely for the benefit of cyclists; they’re also a help to pedestrians. It gets those bikers who might balk at the idea of peddling down the street off of the sidewalk. This, in turn, makes the sidewalks safer and more enjoyable for pedestrians.

This is not to say cyclists shouldn’t be held accountable for how they conduct themselves. It’s important to actually stop at stop signs and red lights; to signal when turning; to let pedestrians know about an oncoming bike; to invest in lights, reflectors and even bells for the safety of bikers, drivers and walkers alike.

But road courtesy is a two-way street — pun intended. Bikers will use bike lanes more if pedestrians look both ways before crossing them — even better if pedestrians avoid walking in them. If everyone on the street is a little more aware of the needs of their peers on skateboards, bikes, roller blades and more, then everyone will be able to get to class safely and comfortably.

Kyra is a sophomore in LAS.