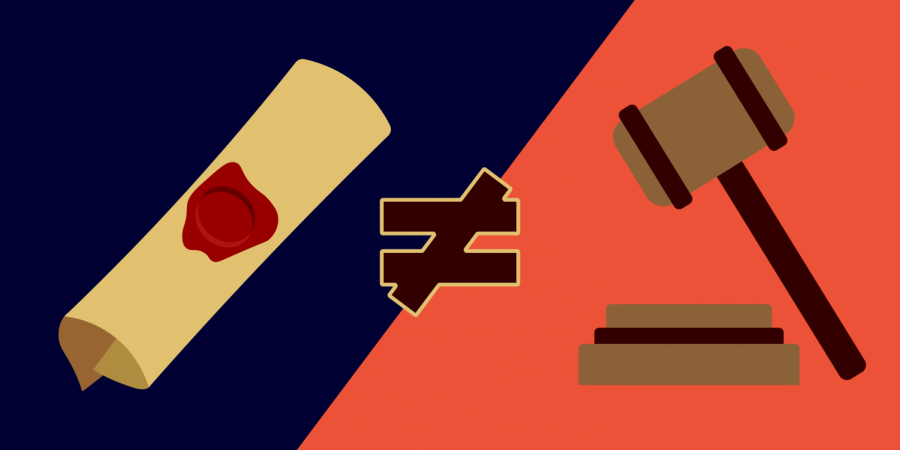 Every time I tell someone here at the University I am majoring in political science, the same question hits me in the face like a snowball: “So, are you planning on going to law school?”

I understand people are curious about my plans after college. It’s a conversation-continuer. After a while, I began to grow a little more annoyed telling people, “No. I don’t plan on attending law school.”

Fellow political science majors: If you are not planning to pursue law school after earning your bachelor’s degree, you’re not alone. Don’t let people assume you will attend law school in the future.

While the pre-law route remains an option, you are by no means obligated to take that path. There are so many other paths in the world of political science.

You could concentrate, for example, on public policies and democratic institutions, which covers various areas of study like policy issues, political parties in the United States and how Congress operates on a day-to-day basis. This could lead to future jobs like a legislative assistant, lobbyist or even some level of elected official one day.

You could concentrate on citizen politics, which covers topics like political campaigns, media and elections. This could lead to future jobs like a campaign manager, political journalist or even a pollster. In these jobs, you work behind the scenes and still have an impact on politics.

During my time in high school, I shadowed and campaigned for Illinois State Representative Avery Bourne and Illinois State Senator Andy Manar, neither of whom went to law school. Even though they reside on different sides of the political aisle, both politicians serve my hometown of Taylorville, Illinois, as part of their legislative districts.

While working hands-on with them on multiple occasions, they gave me a glimpse of how state politics operates in both legislative chambers. They also taught me so much about what politics is like in a real-world setting.

Because of my time working with them, my interest grew in both the legislative process and political campaigns. As a journalism minor, I am also interested in political writing, whether that may lead to a job as a political columnist or even a speechwriter in the future.

To those of you political science students who plan on attending law school, be proud of yourself. There are so many of us out there who do not want to follow that route.

If you’re a person who assumes political science majors will attend law school, don’t find yourself doing that again. We all know what assuming will do. Just let the conversation flow, and see what you will find out about someone’s plans.

To all of my political science classmates, I wish you the best of luck in whatever you decide to do in your future.