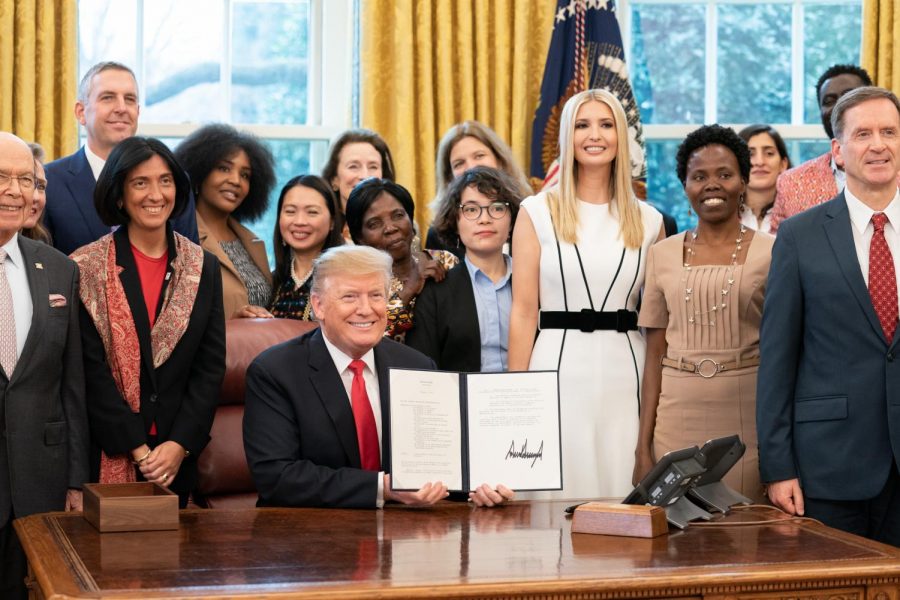 President Donald J. Trump, joined by Advisor to the President Ivanka Trump, members of his Cabinet and guests, addresses his remarks at the siging of National Security Presidential Memorandum to launch the “Women’s Global Development and Prosperity Initiative” Thursday, Feb. 7, 2019, in the Oval Office of the White House.

Of all the politically disastrous policy decisions a statesman can make, there is perhaps no more unpopular choice than cutting entitlements, such as medicare or social security.

Social security essentially forces workers to save some of their income in an account to be used in retirement in order to mitigate high levels of poverty among the old and incapable.

Although the payroll tax pays for social security, workers expect that money to return to them eventually. So when these entitlements are cut, to those harmed by the cuts, it feels like the government is reneging on a long term agreement that can strand a retiree with no financial safety.

The government does not have a hidden vault filled with billions of dollars waiting to be spent on social security annuities, it is a “pay-as-you-go program.” The payroll tax collected from the current generation of workers directly pays for the annuities of the current generation of retirees. In 1950, the ratio of workers to retirees was 16 to one, but by 2015, that ratio had shrank to three to one.

As the life expectancy increases, the birth rate declines and people retire earlier, the burden to pay for social security has worsened. For decades, politicians have been clamoring about the inevitable: Social security is on a road to bankruptcy.

Current projections indicate the program could be insolvent as soon as the 2030s, and so a number of potential course-corrections have been suggested. Lawmakers could raise the retirement age in the U.S., which is already slightly higher than the average in the developed world, they could raise the payroll tax, increase the size of the workforce or reduce benefits to higher earners, among other suggestions.

Rather than increase the payroll tax, the Trump administration, ever the populist salivating at the thought of tax cuts, made cuts to the payroll tax. Against the advice of Congressional Democrats and Republicans, an executive order had to be signed to make these cuts. It was said to have been cut to provide relief to Americans affected by the coronavirus, but such stimulus fails to aid the millions of currently unemployed Americans, who will now be paying less payroll taxes on their nonexistent income.

The most expedient solution to social security longevity would be to increase the size of the workforce. No one has to see their entitlements cut, and no one has to delay retirement. However, in a developed country such as the U.S., birth rates have inevitably declined to a rate that is below replacement level. The only reason the American population continues to increase is due to immigration and partially due to a phenomenon known as “population momentum.”

Regarding increasing the size of the workforce, the government could offer tax incentives to those who have more children. In Sweden, it has been done with relative success, but Sweden is also a country that enjoys childcare subsidies and lengthy maternity and paternity leave, meaning a tax credit may not be the only factor affecting a family’s choice to grow. Additionally, these solutions would be costly.

Even with a tax credit, it’s uncertain whether the U.S. birth rates would rise. Developed countries will simply have less children as more women enter the workforce and fewer children die in infancy. The only reliable way to increase the size of the workforce is to increase immigration.

Slowing all immigration and cutting the payroll tax make are a deadly duo of policy decisions which will only bankrupt social security sooner.

There are other shots of morphine that may revive social security, like reducing benefits to higher earners. In an administration which implemented tax cuts disproportionately benefiting the wealthy and believes in supply-side economics (also known as “trickle-down economics”), this is clearly not a likely path for the president to pursue.

President Trump has claimed he alone will “save” social security, but actions speak louder than words. The administration’s actions reveal a calculated deconstruction of the program by slashing its primary life sources. It would not be the least bit surprising if the administration proposes “necessary cuts” to social security and blames the struggling program on its predecessors rather than itself.

Come Nov. 3, remember that your social security really is on the line.

Andrew is a junior in LAS and the Opinions desk editor at the Daily Illini.