Opinion | One must accept election outcome 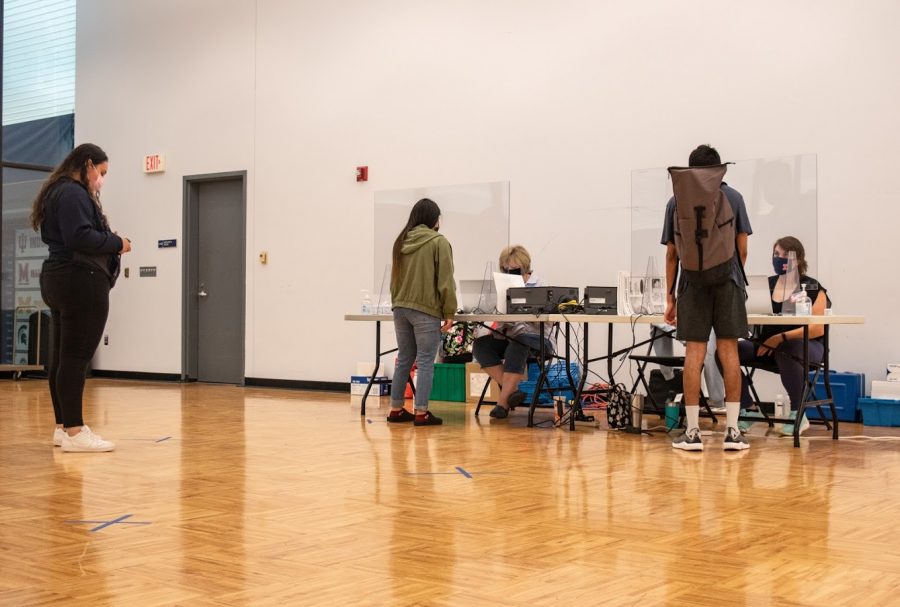 Student voters check in at tables in Multi-Purpose Room 7 at the ARC on Friday.

The United States of America is divided. There are no two ways around it. Considering politics plays a major role in this division — among numerous other issues — the upcoming election will no doubt split the country even further, no matter the outcome.

In these final weeks of one of the wildest presidential campaign cycles in recent years, it will all come to an end on Nov. 3. Or will it? Only time will tell. Whatever the election results, accept the outcome, whether you like it or not.

If you don’t know the candidates, then you must be living under a very large rock. Incumbent President Donald Trump is seeking reelection against former Vice President Joe Biden. It’s probably not the race most people wanted to see, but it’s what America has been watching closely for the past year or so.

As the ongoing COVID-19 pandemic continues to strike the country in many forms, closing down businesses and schools, keeping events from occurring and shattering the lives of everyday Americans, this upcoming election keeps topping what a wild, confusing and unprecedented year 2020 has been.

Where to start? Now with over 200,000 COVID-19 deaths, both candidates continue to use the pandemic against their opponent. Trump doesn’t think Biden can handle this or anything else if elected. Biden thinks Trump hasn’t handled anything well while in office.

Even so, as the candidates and Americans are in the home stretch of the election, there have been a number of October surprises, turning heads and shaking fists in the process. A few weeks ago, Trump, some members of his family and many of his staff members all tested positive for the coronavirus, keeping him off the campaign trail for a while. Rest assured he’s now back to rallying for crowds of thousands of people. But wait, there’s more.

Pandemic aside, last month’s passing of Supreme Court Justice Ruth Bader Ginsburg, Trump was quick to nominate her replacement Amy Coney Barrett to much criticism. Along with those shocking events, Trump and Biden faced off in a wild screaming match that was the first presidential debate, which sparked much conversation.

Since then, Vice President Mike Pence faced Biden’s running mate, California Senator Kamala Harris, in a somewhat calmer debate, but it still had its most discussed moments among voters and political experts. Last week, Trump and Biden participated in town hall events for CNN and ABC, respectively, on the same night, which brought much more criticism.

Recently, Biden’s son Hunter is under fire for purportedly having relations with a Ukrainian natural gas firm, a scandal still ongoing. Who knows what will come about it, but it will continue to be a hot topic at least until the election is over.

With this presidential election just around the corner, there’s no telling what will happen or what the outcome will be. Either way, accept it. Whether you’ll be upset and happy, what happens will happen and no one can change it.

It’s best to accept it for everything it is. It may not be the outcome you want, but that’s the beauty of democracy. You can help change it in the next election cycle.