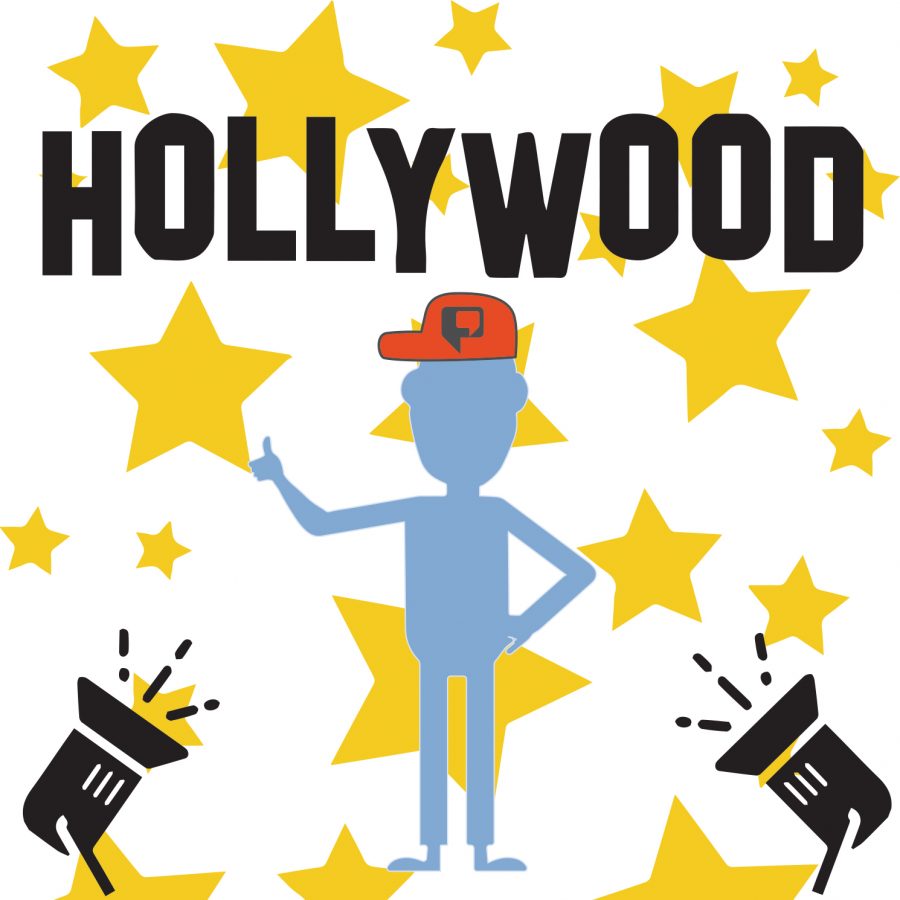 Fame and fortune await Scout. Standing beside Hollywood Boulevard — successive to Scout’s Pride venture — Scout appears simple compared to the pageantry of Hollywood. Still, the pursuit for the “real America” looms large over this operation into show business. Thus, the show marches forward.

Hopping off a bus in front of the Chinese Theatre, stardom is well within Scout’s reach. Subsequently, Scout detects there is a distinct air surrounding Hollywood — unique and incomparable to the maize-influenced atmosphere back home in C-U.

With the sun sweltering above, and a certain reporter’s stomach grumbling, soon this journalist departs for fairer pastures — wistfully distant from the opulent Hollywood theaters.

Upon closer inspection, these signs demonstrate this protest as one against the “cheugification” of Hollywood Boulevard.

A woman standing amidst the crowd brandished a sign asserting “Hollywood is for the stars, not for tourist hogs.” Similarly, speakers at the protest remarked how Hollywood merchandise is “not what it used to be.” Fortunately, to the reader’s delight, Scout secured an interview with the anti-cheugy rally’s organizer, Ella Emhoff — step-daughter to Vice President Kamala Harris.

“We march for the silent majority: Those of us who know Hollywood Boulevard doesn’t have to be all ‘Minions’ merchandise and stuff,” exclaimed Emhoff. “Today we take that first step in reclaiming Hollywood back from the normies.”

When questioned over what exactly is the plan to “de-cheugify” Hollywood, Emhoff, along with her fellow favored model and celebrity-children friends, declared, “Our only hope is that by us being here, we make Hollywood cool again.”

“If you or your family enter Hollywood with a ‘Live, Laugh, Love’ shirt or tote or openly wear Jimmy Kimmel merchandise, we will promptly escort you outside Los Angeles city limits,” concluded Emhoff and company.

However, Scout will admit he has doubts over this fabled “escort” considering the Santa Ana winds may itself lift these “model protestors” out the city with a sole gust.

Nevertheless, Scout was perplexed. If these individuals — both “cheugy” and celebrity — failed to embody any semblance of the genuine America, who would? Heartbroken, Scout’s last vestige for optimism in Tinseltown remained while reflecting on the Hollywood Walk of Fame.

Hopeless that the American spirit may be as deceptive as show business, Scout knew of only one location which could salvage his journey across America. Accordingly, it was not until reaching luminary Nick Offerman’s Hollywood star did Scout understand his ensuing campaign for the real America.

“Orange County,” a voice ricocheted across a nearby abandoned alley. “Escape these cheugy, liberal mayhems for a while and go orange.”

Curious as to why anyone would suggest visiting Orange County, Scout pondered this mysterious voice’s commands. Could this be the American spirit directly communicating with Scout?

Resolved of his earlier apprehensions, Scout comprehended and accepted the feasible spirit’s directions: Orange County it shall be.

Scout nervously recommends Hollywood for the cheugy and cool alike. One would conceive that a community revolving around ego would not divide itself into the cringe camps of “pro- and anti-cheugy,” yet once again, polarized times present polarized lifestyles.