New students can look forward to Illini wins in all sports 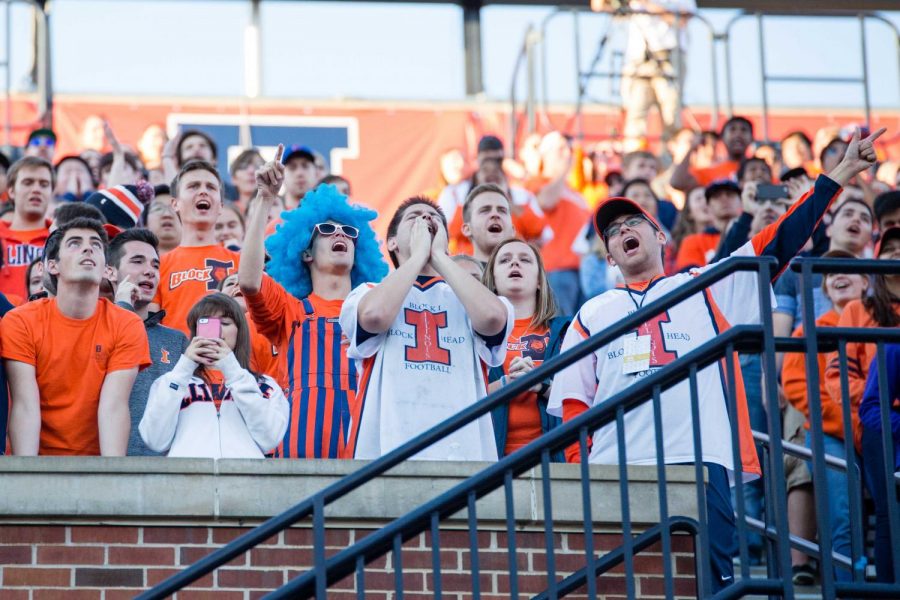 Students in Block I cheer during a football game against Purdue at Memorial Stadium in 2016.

It’s safe to say some recent graduates envy the new students walking onto campus this fall.

While the envious mood may come from the desire to avoid what college students perceive as the “real world,” it also may come from the fact that incoming students will miss out on the ineptitude of the Fighting Illini major revenue sports over the past handful of years.

The football and basketball programs have been digging themselves out of a deep hole. The still relatively-fresh-hired Athletic Director Josh Whitman has made it a priority to instill the “We Will Win” mentality for the two teams, and strides have definitely been made.

The hiring of Lovie Smith and Brad Underwood have brought the programs in a direction they haven’t seen in quite some time with their style and recruiting ability. Both programs have been able to pile up recruits that their successors failed to nail down. With that being the case, new students may have a bright future to look forward to, and the school’s “We Will Win” slogan could become a reality.

However, those students of the recent past and present have experienced plenty of winning from numerous other athletic programs throughout their time on campus.

Last season alone saw several major accomplishments: the men’s gymnastics team took home a Big Ten Championship and third-place finish nationally, the men’s golf team won their fourth consecutive big ten title, the women’s golf team grabbed second at the Big Ten Championships for the first time since 1976, the women’s volleyball team made a run in the NCAA tournament to the sweet sixteen, and that’s just to name a few.

Individual accolades were picked up throughout sports as well, proving that plenty of winning is happening in a Fighting Illini uniform.

I have written about the attention that should go toward many of these non-revenue sports a couple times before, and I have only been sitting in the Sports Editor position since March 2018. The student-athletes that participate in these athletic programs across the university deserve coverage and attention when earned, and it has been earned.

Although the coverage and attention shouldn’t just come from the media. Often times, with no surprise, the media just gravitates toward what the audience is most interested in hearing about. The audience must begin to recognize and care about these certain sports programs for the appropriate attention to be given.

A Big Ten university offers plenty of rich sports experiences, and I believe it is important for those stepping onto campus to look further than Memorial Stadium and the State Farm Center.

The action is happening in the gymnasium of Huff Hall. Beautiful nights are spent on the Eichelberger and Illinois fields. Matches are closely contested at Atkins Tennis Center. High speed is seen at the Illinois Track and Soccer Stadium.

I can go on and on about the importance of sharing an eye with these other Fighting Illini teams, but at the end of the day, it is up to the student themselves to blink.

The Illinois sports scene is in a good place, and it’s heading down the right road.

At the end of the day, just make sure to jump aboard.

Eli is a senior in Media.