This otter be good: Moms versus otters 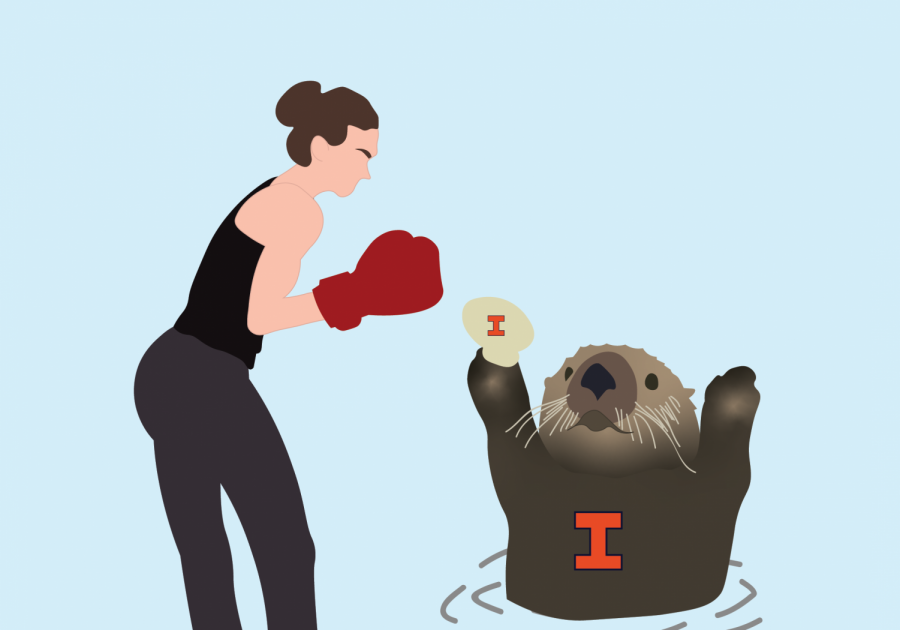 Recently there has been a certain hotly-debated question on campus, specifically regarding the disposition of the “Alma Otter” as the symbol of the University. Unfortunately, all students on campus (including, I’m certain, those who shamefully cast their votes against the would-be mascot) were saddened to learn this famed character was cast down into darkness by the collective will of the student body.

But as one question is answered, another shall arise, and here, now, I will put this new query to rest. In the spirit of this Moms Weekend, I now pose, as well as answer, the following question. In a fight, who walks away: the Alma Otter or your mother?

Let’s set up some ground rules here. First, we’re going to be assuming averages for the sake of fairness. I’m sure somebody out there has a mother who is a professional boxer or was a Marine or possesses the reincarnated spirit of Steve Irwin. Whatever. There are also some mothers who make potatoes look self-motivated. Here’s our ground rule: we are going to assume the average otter is fighting the average mother.

The average age of a new mother is 26 years old. If we’re talking about the mothers of college students, then we can add 18-24 — the average age for four-year undergrad students — to that number, to get a rosy average age of 47 years old. We can conclude our theoretical mom is middle-aged.

What about our otter? Otters live to up to 16 years and they’re considered mature adults a few years after they’re born: two years for females and three for males. We can assume the Alma Otter is the same gender as the Alma Mater for which she is named, so that puts the average age of the Alma Otter at around 6 years old.

The mother definitely has the upper hand if we’re talking about life experience. Your mother knows how to do her taxes and navigate traffic; one shudders to think at how badly outclassed the Alma Otter is in this field.

What’s more is the size disadvantage. There is an adage in fighting that goes something like this: A good, big fighter will beat a good small fighter. While this isn’t always the case, I pick for Exhibit A: the common house cat. I don’t know about you, but a game of cat and mouse is usually only any fun for the cat. Watching Tom get beaten around by Jerry might be good for a giggle, but in real life these size differences can really rig the odds.

Sea otters usually weigh between 31 and 99 pounds, penciling in our average at around 65 pounds and approximately four feet in length. Compare that to the average middle-aged American woman, who weighs in at 170 pounds and a sneeze above 5 feet in height; our otter doesn’t have a prayer!

Don’t give up just yet. Yes, humans are pretty good tool users, but we should not lose faith in our intrepid otter. Sea otters are well-known for their use of rocks to smash open the shells of mollusks. This still places them as one of the few other tool-using mammals. It could leverage this tool usage to win the day! Maybe … uh … the otter could pull out a gun? The average sea otter has a gun, right? This seems plausible.

Maybe I’m grasping at straws, but there is at least one thing that cements an edge in the otter’s favor: the cuteness advantage. Otters are impossibly adorable, which will surely play a deciding factor in how willing the mother is to make use of her size advantage. There’s a cultural aspect, too; most Americans are raised to frown on people who abuse a huge power imbalance. Think about how you would react if you saw someone beating an adorable otter to death. These social norms might keep the mother from unleashing her full strength. I mean, I’m not saying it’s likely, but it is definitely probable the otter wins this one. Well, it is possible. Maybe. It could happen.

Okay, I’ll face the facts. The mother totally wins here. Congratulations to all the mother-fans who were holding their breaths. To all the people who were hoping for the Alma Otter to win, I have this much to say in consolation: You will get used to the disappointment.

Yoav is a senior in LAS