Game days are great days, even for non-fans 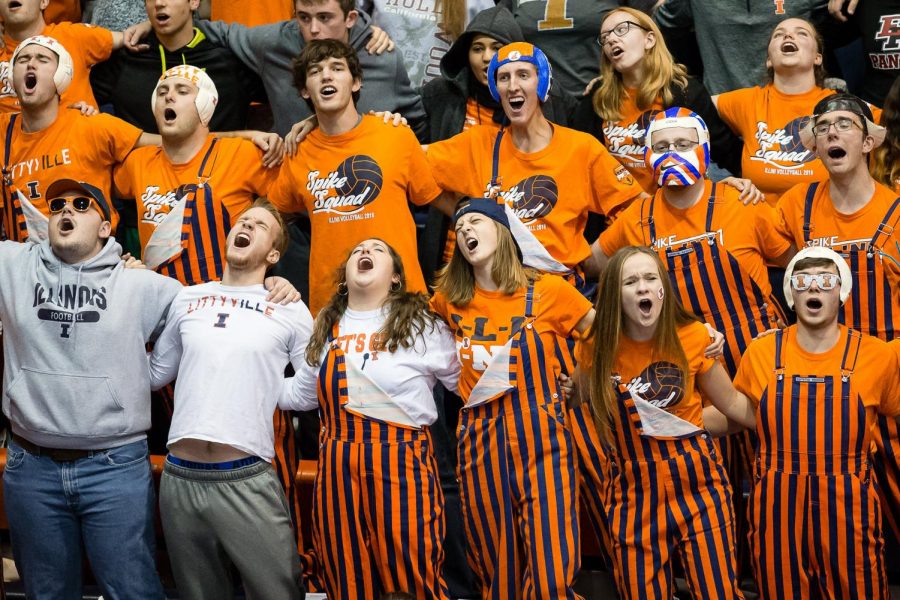 Members of the Spike Squad student section sing “Hail to the Orange” during a break in the match against Penn State at Huff Hall on November 10. The Illini won 3-2.

If you aren’t a huge sports fan — much like me when I first entered Memorial Stadium during Sights & Sounds my freshman year — you’ll be quick to realize sporting events mean a lot to the people at the University of Illinois.

While there may be much to be done in terms of winning with some teams, all of the student-athletes on campus are incredibly talented, and the events in which they compete are tons of fun — and better yet, the University wants students to engage in these opportunities and offer free tickets as a bonus, so be sure to check your email! Take advantage of one of the many rewarding parts of attending a Big Ten university by grabbing a few friends and going to a game.

If you can’t list the starting roster of the Chicago Blackhawks from memory, here’s a guide to the best places to begin your journey as an Illini sports fan.

One would think smaller crowds and less expensive tickets might yield a less engaging form of entertainment, but the hockey games at UI offer some of the most intense athleticism a person can get on campus. Rough and tough, the team tears through their opposition year after year during their September-March season, offering an impressive record and even more impressive maneuvers. Keeping your eye on the puck can be a challenge to the untrained eye, so be sure to wear your glasses.

After a record-breaking season on many accounts this past year, the Illini volleyball team hopes to live up to the high expectations when they kick off in 2019. Following Illinois’ fourth trip to the NCAA semifinals and several promising recruits, hype surrounds the athletes and their fans and leads many to anticipate unparalleled energy at this season’s games.

My family, friends and I have attended a handful of home games located in Huff Hall — right across the street from the Ikenberry Commons. A reasonably priced form of entertainment, games are offered throughout the week in the fall semester, so catch a match or two after you grab dinner for some post-class fun!

A classic, indeed. Win or lose, football games play the background to many of my favorite fall college memories. Game days feature much more than just the game. Festivities go all day long, from early-morning tailgates and barbecues to late-night bar crawls, the game tucked in the middle as a centerpiece to the fun. Get yourself a hot dog from the concession stand, settle in to the sound of the Marching Illini playing “Illinois Loyalty” and enjoy the show.