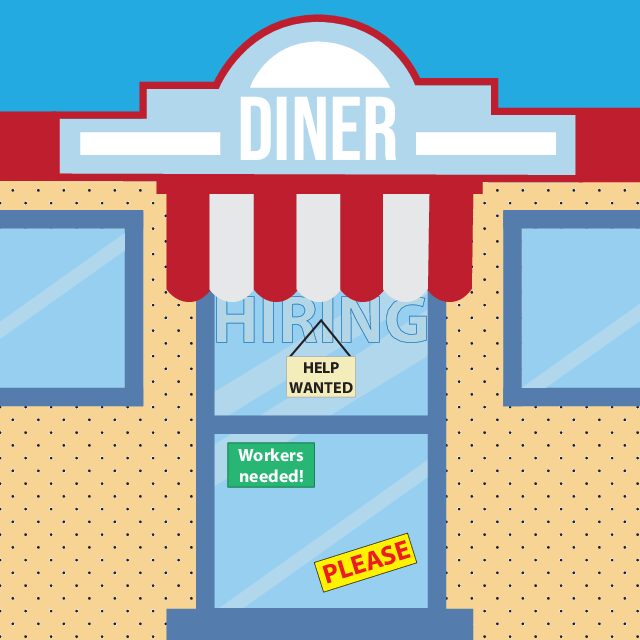 A stroll down Green Street in Campustown highlights Champaign-Urbana’s reflection of the widespread restaurant staffing problems that are occurring throughout the nation. The multiple “Now Hiring” signs posted on doors and myriad of job applications available online are indicative of the numerous C-U restaurants that are experiencing their own labor shortages.

The National Restaurant Association recently released its “State of the Restaurant Industry” mid-year report in August, providing an updated look at the pandemic’s effect on the restaurant industry and the industry’s recovery through July.

The report found that despite the steady upward trend of job creation in the first half of 2021, eating and drinking venues are nearly 1 million jobs, or 8%, below pre-pandemic employment levels. Food and beverage sales in the restaurant and food service industry, however, are projected to increase nearly 20% from 2020, totaling $789 billion.

According to the study’s data from June and July, 75% of restaurant operators said recruiting and retaining employees is their top challenge, which is the highest level the Association has ever recorded.

Lucas said he understands why restaurants are having difficulty hiring new workers, and he’s noticed other local businesses experiencing this problem.

“I mean, I know a lot of other business owners in town,” Lucas said, “And everybody’s kind of a standing order at this point. It’s like, ‘Hey, we’re all hiring.’”

He said the worker shortages are a difficult topic to talk about because he doesn’t want to complain, yet he has worked a lot to cover the losses.

Although he’s altered how he operates his business to adapt to these shortages, he explained that he hasn’t fully figured it out yet. Lucas works in his shop around six days a week, and he’s gradually hiring people while trying to get his business into a position where it can stay open later, so hiring in itself has not been a huge issue for him.

Lucas said he doesn’t believe in the common phrase, “nobody wants to work anymore,” which is a saying that has become increasingly common during the ongoing pandemic. Instead, he is using an approach that will attempt to change problems he’s witnessed throughout his extensive experience in the restaurant industry.

“What I’m trying to do instead is to kind of rebuild my business to a place that’s healthier to bring in people,” Lucas said. “And as far as wages goes and hours and all that stuff, trying to make it a place that people want to come back to work to because there’s a reason a lot of people left this industry.”

He said he’s seen an uptick in customers after University students returned to campus last month, saying these past two years have felt like an extended summer break because business was slower without students being on campus.

“We’re kind of slowly getting back to being not as busy, but pretty close to as-busy as we were before the pandemic started,” he said. “Which was quite a jolt, given that we haven’t had that in almost two years.”

As the number of COVID-19 variants rises, the National Restaurant Association found that the looming threat of the Delta variant may reverse some gains made in the first six months of this year.

The study revealed that six in 10 adults altered their restaurant use in response to the Delta variant, 37% ordered delivery or takeout instead of dining in a restaurant and 19% stopped dining in restaurants altogether.