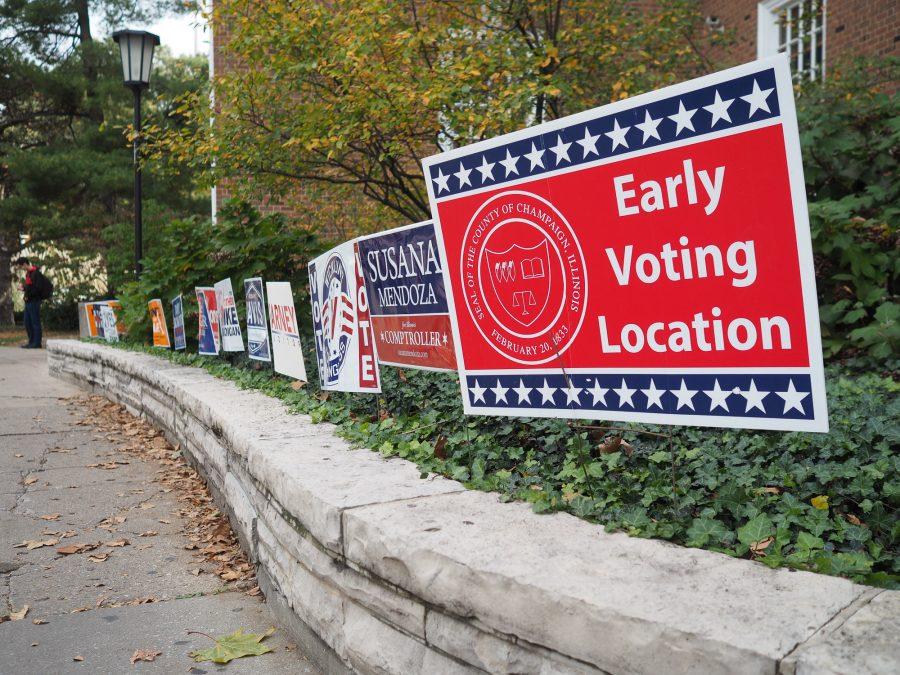 Early voting signs placed outside of the Illini Union notified students that they could vote early on Oct. 26, 2016. The Illini Union will be the only early voting location as the request to expand locations on campus was denied by Gordy Hulten.

On Election Day, students will offer plenty of excuses for not going to the polls:

“My class schedule is packed on Tuesdays.”

“I forgot to register.”

“I hate both presidential candidates.”

But when people give all of these excuses, they take for granted an opportunity that people in other countries would give anything for — the right to vote.

One member of our editorial board heard someone say that votes in Illinois, a state that has given its electoral votes to a Democrat every year since 1988, don’t make a difference in the presidential election compared to important swing states such as Florida and Ohio.

Whether you believe that or not, there is so much more at stake in this election than the presidency.

As explained in our endorsements, this election is filled with real issues that affect students like you. This includes the state’s seemingly never-ending budget crisis, which has already brought layoffs to schools such as Eastern Illinois and Western Illinois universities, as well as uncertain financial aid for students at schools including our University.

More higher education cuts could be coming soon. Gov. Bruce Rauner and other state lawmakers will meet after the election to discuss a new plan to combat the budget crisis.

The Illinois state senator in the 52nd District and the House of Representatives member in the 103rd District directly represent University students in this process.  State Sen. Scott Bennett is up against Urbana Alderman Michael Madigan to see who should be on the front lines fighting for students.

It is your right to vote for the person who you believe will fight for you and has your best interests at heart.

Remember this: If you forfeit your right to vote and are unhappy with the results, no one is going to care when you complain on Facebook.

Not only is voting your right, it is your civic duty.

If you are a senior in college and think that the decisions of these lawmakers will not affect you, don’t forget about your fellow classmates who will still be here. You may leave for a different state, but your fellow students’ futures are entrusted to you.

So if voting for yourself doesn’t seem worth it, vote for the benefit of other students.

Vote for your younger brothers and sisters who will be in college soon.

And vote for those who are unable to vote.